By MRA-UK: I have opined previously that patriarchy, far from being oppression of women by men, was largely a piece of theatre, an illusion. By observing the formalities associated with a man being “master in his own house”, the man’s blushes were spared: no one need ever acknowledge his domestically subservient position, though everyone really knew. The law of coverture is generally regarded, especially by feminists, as a quintessentially patriarchal device. They are right – but only if we adopt the interpretation of patriarchy as illusion. Looking behind the smoke and mirrors of coverture into how it was interpreted in practice reveals that it too was really a façade of male power concealing a female power within.
I have drawn upon the following sources for the account which follows (which relates to the UK),

Read more »
Posted by Angelo Agathangelou at 10:42 pm 2 comments: Links to this post

'No other countries whether Muslim, Christian, Buddhist or Hindu expect world leaders to subscribe to or worship their local religious symbols. But the Jewish State does. It is even brazen enough to dress world leaders in Yarmulkes.'
By ex-Jew Gilad Atzmon: George H.W. Bush, the 41st president of the United States, died last Friday. President Bush was loved by the Jews. Over the weekend we saw an endless parade of Jewish individuals and organisations paying homage to Bush for his commitment to Israel and to the Jews. 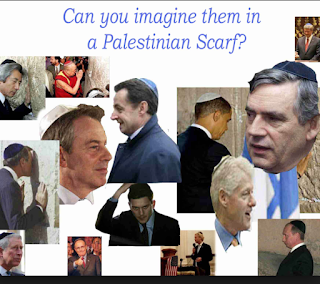 The Republican Jewish Coalition (RJC) described Bush as “a great friend of Israel, the Jewish people, and the RJC.” The group joined other Jewish voices in noting the work Bush did to help bring Jews from the former Soviet Union and Ethiopia to Israel as well as his actions to help ensure the safety of Israel. Bush also led the effort in the UN to repeal the ‘Zionism is Racism’ resolution and he stood up against Saddam Hussein who, at the time, was one of the last Arab leaders to oppose Israel and Zionism.
Yet, it was the photo of Bush at the Wailing Wall (above) that grabbed my attention. On Saturday, the Israeli press circulated a photograph of the  41st president in suspiciously intimate proximity to the Wailing Wall.

All I Could Do - Airklipz

GlobalFaction: “All I Could Do” is about poor black entertainers struggle in coming to terms with the bubble gum and two-faced nature of the music industry. ...Airklipz is a reality rapper from South East London, who is trying to create a more meaningful and purposeful sound with his music.
Posted by Angelo Agathangelou at 5:06 pm No comments: Links to this post

Not Free To Choose

Max and Stacy discuss a Bloomberg piece asking if competition is dying and taking capitalism with it. The fact is that the top two companies in most industries control an increasing share of the market in the US and so Americans are no longer free to choose... and it shows. Walk into any hardware store - and 80% of the market is controlled by just two corporations - and it is a bleak landscape of bored employees unable to provide any information at all about the products they are selling. In the second half, Max continues his interview with Chris Martenson of PeakProsperity.com about Medicare4All, the economics of fracking, and thoughts from the precipice.
Posted by Angelo Agathangelou at 2:03 pm No comments: Links to this post

Authored by William Craddick: Europe’s powder keg is growing dangerously close to an explosion as unrest spreads from France to surrounding mainland nations. These protests are unified by many different factors such as dissatisfaction with mass migration and anger at economic failures blamed on President Emmanuel Macron. But most significantly, they are united by the use of yellow by those who have taken to the streets.
The “Yellow Vest” protests are in fact, a color revolution.
While color revolutions can morph into popular resistance movements, they are at their core professionally organized and instigated, sometimes at the state level. In the case of Europe’s Yellow Revolution, the big winner, and also one of the only states to avoid unrest, is Great Britain.

Color revolutions are a strategy of fomenting unrest within a country with the ultimate goal of removing the state’s current regime from power.

Read more »
Posted by Angelo Agathangelou at 11:07 am No comments: Links to this post

Truth Is What We Hide, Self-Serving Cover Stories Are What We Sell

"The fact that lies and cover stories are now the official norm only makes us love our servitude with greater devotion..."