As is often the case with proponents of justice for Palestinians, Marc Lamont Hill was watched closely by Jewish state Israel partisans as he spoke before the UN last week. They took a phrase – one phrase – from the speech and threw the rest aside, hoping the world would do likewise. Ever since, we’ve been herded toward the anti-Semitism charge and away from any reflection on the actual issue.

By Kathryn Shihadah: Looking at mainstream media headlines during the last week, one might imagine that Marc Lamont Hill stood up in the UN chambers, cried out “Free Palestine from the river to the sea and wipe Israel off the map,” dropped mic, and left the building.
But he said oh, so much more, words that Israel partisans don’t want us to notice – words that we must not scrutinize.

Power Of “We” ~ Language Frames How We Think 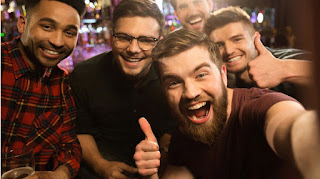 By Andy Thomas (aka "Andy Man"): A few weeks back I wrote a piece called Nihilism and Beyond for the Zeta Male in which I argued that men should make connections between each other without regard to women. Defining one’s self to be outside the dominance hierarchy is necessary because white knighthood does not serve us and it no longer serves humanity as a whole. The world is changing, I said, and we can’t stop it or make things go back.
I stressed the importance of making social connections because isolation is simply not a good alternative to being part of traditionalist mainstream culture. I try to write about things I’ve done or experienced myself, and isolation is one of them. At the time it was quite deliberate, as I reasoned that because I could live happily my own head, things would be good if I simply cut myself off. After six months, everything seemed fine although I sensed a little emptiness creeping in. After a year and a half, however, I was struggling.
Isolation is nihilism. A life of solitude is not a viable alternative for a zeta male.
A major point I wanted to make in the article is the idea that men should use the word “we” when referring to men in general. Here, I want to expand on this a little. 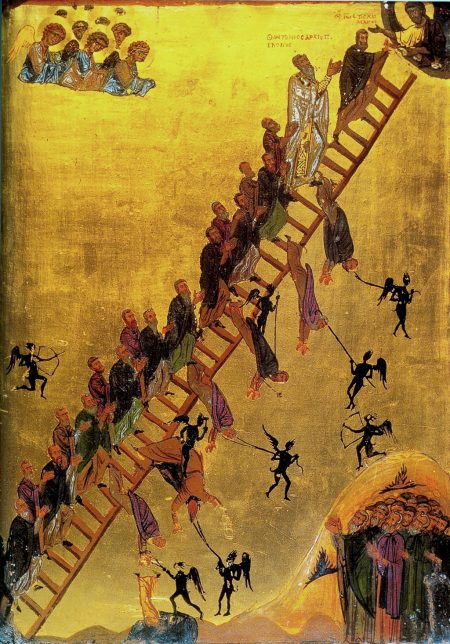 By Author Douglas Galbi: The seventh-century desert monk John Climacus was intellectually self-conscious. That’s a mental level above the artificial intelligence of a robot or the evolved programming of simple life-forms. Self-consciousness is a being’s mysterious ability to move to a point of view outside of itself and to think about itself as another being might do. John Climacus thought about himself in the conventional biblical categories of body/flesh and soul/spirit. In doing so, he perceived an intricate, conflicted self. That intricate, conflicted self remains relevant today to men seeking to climb the ladder from subordinate beings to beings intimate with God. Gynocentric society teaches men that they are naturally demonic. Men self-consciously grappling with the demonic construction of men experience inner conflict:

By what rule or manner can I bind this body of mine? By what precedent can I judge him? Before I can bind him he is let loose, before I can condemn him I am reconciled to him, before I can punish him I bow down to him and feel sorry for him. How can I hate him when my nature disposes me to love him? 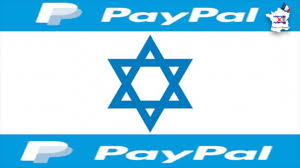 By ex-Jew Gilad Atzmon: On 16.1.2018, as I was preparing  a crowdfunding to help me to pay legal bills incurred by the recent libel case against me, I received an email from PayPal ‘Brand Risk’ Management. The letter said, “We have recently reviewed your usage of PayPal’s services, as reflected in our records and on your website https://www.gilad.co.uk/.  Due to the nature of your activities, we have chosen to discontinue service to you in accordance with PayPal’s User Agreement. As a result, we have placed a permanent limitation on your account.”
This was a surprise to me since my website is both an artistic and an intellectual platform. There is no hate or other inappropriate content on my site nor in any of my writings. I have never been challenged by any law enforcement body anywhere in the world.
It is likely that PayPal succumbed to pressure from one Zionist body or another. Their objective is obviously a crude attempt to interfere with my ability to raise the necessary funds for me to avoid risking bankruptcy.

GlobalFaction: Cerose's second single from his Reggae album Truth And Kulture.
Posted by Angelo Agathangelou at 10:00 am No comments: Links to this post

The pendulum begins to swing back: Rep. Rashida Tlaib plans to lead a congressional delegation on a trip to the occupied West Bank – a counterbalance to AIPAC’s standard Israel trip for new Congress members. Rights groups have regularly criticized the AIPAC-sponsored trip as propaganda, and hopes to show what is really happening to Palestinians in the region.
From Middle East Monitor: Democratic representative-elect Rashida Tlaib is “planning to lead a congressional delegation to the Israeli-occupied West Bank”, according to a report by the Intercept.

The Intercept described the trip as “a swift rebuke of a decades-old tradition for newly elected members: a junket to Israel sponsored by the education arm of the American Israel Public Affairs Committee, known as AIPAC, the powerful pro-Israel lobby group”.
Read more »
Posted by Angelo Agathangelou at 4:09 am No comments: Links to this post

The Israel Defense Forces said their army doesn’t launch stun grenades or tear gas into Palestinian schools, but after a video surfaced it altered its response, blaming “the wind.”

A box filled with dozens of used tear gas canisters and stun grenades collected by a school in Hebron after the IDF reportedly shot them into the school over the past few months.
By Yotam Berger: An Israeli soldier was filmed shooting tear gas into a Palestinian school in Hebron during school hours, despite military denials. A military source later said the soldier apparently shot in response to rocks thrown by students.
Palestinians have reported that soldiers have been shooting tear gas and stun grenades into schools, but the Israel Defense Forces has denied such incidents. Haaretz obtained a video documenting at least one such incident.
Last week, Palestinians reported to Israeli veterans’ anti-occupation group Breaking the Silence an increase in the scope of tear gas launched at Hebron schools located in an area of Hebron where many schools can be found, including primary schools.
Read more »
Posted by Angelo Agathangelou at 12:56 am No comments: Links to this post