Uprising In France - The Anatomy Of Populism And Challenging The Matrix

By Alexandr Dugin: The protests in France, symbolized by yellow vests, cover an increasingly large part of society. Political experts have already called this movement a “new revolution”. The scale of the “yellow vest” movement is already so serious that it is absolutely necessary to analyze this phenomenon in a detailed way. 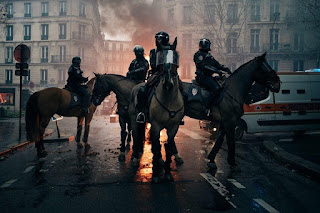 We are dealing with a vivid manifestation of modern European populism. The meaning of populism as a phenomenon rising from the political structure in the societies formed in the wake of the Great French Revolution, and based on the confrontation between right and left, are changing radically.
Populist movements reject this classical political left/right scheme and do not follow any strict ideological attitudes, either right or left. This is the strength and success of populism: it does not play by the preset rules. Nevertheless, populism has its own logic: for all its spontaneity, it is quite possible to trace some logic and even the beginnings of a populist ideology taking shape before our eyes.

The Jews Are Coming To Get You - Attending School While Palestinian: Brief Horror Stories From The Last 6 Weeks

Israeli forces prepare to demolish a school in Hebron, West Bank on 11 July 2018 [DonnaBaranski-Walker/Twitter]
Semitic children in occupied West Bank schools are attacked and traumatised on a regular basis, as a matter of official anti-Semitic Jewish state policy. These are stories from just November and ten days in December (hell subsidised by American tax dollars).
Compiled by If Americans Knew:
Nov. 1 Jewish Land Thieves Dump Sewage into Qalqilia-district Schoolyard
“Israeli settlers from the illegal Sha’are Tikva settlement dumped their sewage onto school property in the northern West Bank village of Azzun Atma…Sewage flooded the school courtyard and playground, resulting in a repulsive smell inside the school…this is the second time in two months settlers dump their sewage on the village school…it usually takes over 10 days for sewage water to dry, causing health hazards for students and the community at large.”
Read more »
Posted by Angelo Agathangelou at 6:43 pm No comments: Links to this post

From Marc Lamont Hill To The Quakers, No Criticism Of The Jewish Apartheid State Israel Is Allowed

By Jonathan Cook: For 30 years, the United Nations has held an annual International Day of Solidarity with the Palestinian People on 29 November. The event rarely merited even a passing nod in the mainstream media. Until last week.

Marc Lamont Hill, a prominent US academic and political commentator for CNN, found himself deluged by a tsunami of outrage over a speech he had made at the UN headquarters in New York.

Rudolph Is ~ PROBLEMATIC + Feminist Christmas Songs You Need In Your Life

How The West Eats Its Children 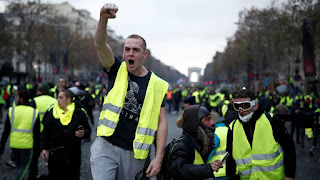 By Thierry Meyssan: By taking to the streets, the French have become the first Western population to take personal risks to oppose financial globalisation. Although they do not realise it, and still imagine that their problems are exclusively national, their enemy is the same force that crushed the region of the African Great Lakes and a part of the Greater Middle East. In order to understand the project which inextricably unites these apparently disparate events, we have to take a step back.

The cause of Western recession
International relations experienced a profound change with the paralysis of the Soviet Union in 1986, when the State was unable to control the civilian nuclear incident in Tchernobyl [1], then with the revocation of the Warsaw Pact in 1989, when the East German Communist Party [2] destroyed the Berlin Wall, and finally, with the dissolution of the USSR in 1991.

Read more »
Posted by Angelo Agathangelou at 10:13 am No comments: Links to this post

"There's nothing more Orwellian than the idea that old tweets from many, MANY years ago can convict you of 'wrong think' in today's modern dystopia of moral and ideological puritanism."
Said Dave, Computing Forever.
Read more »
Posted by Angelo Agathangelou at 7:56 am No comments: Links to this post

A 23-year-old disabled Palestinian man was shot dead in the back as he walked down the street. The Jewish apartheid state claimed that this occurred during a “clash,” but a video has now surfaced of the murder.
By Jack Khoury and Yaniv Kubovich: A video of the fatal shooting of a Palestinian shows that he was shot in the back and contradicts the Israeli military’s claim that the incident occurred during violent clashes.

Read more »
Posted by Angelo Agathangelou at 3:57 am No comments: Links to this post

Seven Days Of Failures For The American Empire

Authored by Federico Pieraccini: On November 25, two artillery boats of the Gyurza-M class, the Berdiansk and Nikopol, one tugboat, the Yany Kapu, as well as 24 crew members of the Ukrainian Navy, including two SBU counterintelligence officers, were detained by Russian border forces. In the incident, the Russian Federation employed Sobol-class patrol boats Izumrud and Don, as  well as two Ka-52, two Su-25 and one Su-30 aircraft.
Ukraine’s provocation follows the advice of several American think-tanks like the Atlantic Council, which have been calling for NATO involvement in the Sea of Azov for months. The area is strategically important for Moscow, which views its southern borders, above all the Sea of Azov, as a potential flash point for conflict due to the Kiev’s NATO-backed provocations.
To deter such adventurism, Moscow has deployed to the Kerch Strait and the surrounding coastal area S-400 batteries, modernized S-300s, anti-ship Bal missile systems, as well as numerous electronic-warfare systems, not to mention the Russian assets and personnel arrayed in the military districts abutting Ukraine. Such provocations, egged on by NATO and American policy makers, are meant to provide a pretext for further sanctions against Moscow and further sabotage Russia’s relations with European countries like Germany, France and Italy, as well as, quite naturally, to frustrate any personal interaction between Trump and Putin.