Authored by Daisy Luther: For some people, preparedness is about the big things: the well-stocked retreat home, buying yet another firearm, or getting a super-fancy generator. While these things can certainly be classified as preparedness endeavors, it isn’t the expensive and dramatic gestures that make us truly prepared people.
The way prepared people spend their time before an emergency is the real key to survival, and this is something that no amount of money can buy.
It’s the small daily habits that become an innate part of our everyday lives – habits that may not even be noticeable to someone outside the lifestyle.

Real preppers, the ones you should look to for advice if you happen to be new to preparedness, are the ones who quietly conduct their daily lives with an eye towards readiness. Not only are these the qualities you should strive for yourself, but they are also the qualities that can help you to determine whether someone is the “real deal” or an armchair survivalist.

"It's inconceivable that a child this young could be taken by force by armed soldiers, held alone and then not even notify the parents. A human rights watch report documented how Israeli Death Forces [IDF] have choked children, thrown stun grenades at them, beaten them in custody and as with 6-year-old Zaeed, threatened and interrogated them without the presence of parents or lawyers and also failed to let their parents know about their whereabouts."
Read more »
Posted by Angelo Agathangelou at 2:07 pm No comments:

TheLaughPlanet: The original purpose of comedy was to shed light on the very real issues that plague society. It is a humorous way of facing the less-than-humorous facts of life. Political correctness restricts our ability to face these realities, and by consequence to find humor in them. For the entire history of humankind the funniest stories, jokes, and anecdotes have typically been at the expense of other people. Political correctness prohibits making “fun” of any person unless that person is a straight white male. No other category of human being can be made fun if without someone claiming “foul”! Comedians that want to prosper will be forced, therefore, to only prey on straight white males for their comedic material. That is going to get very boring in a very short period of time.
Posted by Angelo Agathangelou at 11:54 am No comments:

The Jewish Grinch That Ruined Christmas By Bombing Syria

Syrian Girl
Posted by Angelo Agathangelou at 5:42 am No comments: 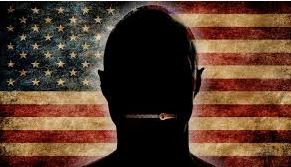 Let Nothing Dismay
By Paul Edwards: ‘Twas some nights before Christmas and all through the House and Senate not a creature was stirring, not even the rats. They bailed and turned out the lights. On the country...

A cluster of shocks to the body politic has made for a holly, jolly Christmas in which big honkin’ lumps of coal will be stuffed in stockings of some high-octane Federal clients accustomed to gold, frankincense, and more. Oddly, in these times, Santa will be dumping mainly on those who deserve it.

Where to start? You got your Dow and S&P tanking, the smoking jalopy of government shut down, SpecOps purportedly yanked out of Syria, Dear Leader spread-eagled on His Wall, and gored oxen bellowing Holy Cow.

Okay, the market bleed was overdue and predicted. The Big Hitters jacked their stock prices with tax scam buybacks so the popping of their magic money balloon claws a little back. Shall we bitterly mourn? The Bigs do as little as they possibly can for the real economy the rest of us live in anyhow.

By Joe Lauria: WikiLeaks publisher Julian Assange has vehemently denied that he ever met Donald Trump’s former campaign manager, according to journalist and filmmaker John Pilger, who met with Assange at Ecuador’s embassy in London last week.


Pilger said Assange told him the story published by The Guardian on Nov. 27 was a “total fabrication.”  Pilger told Consortium News in an interview for the Unity4J vigil on Friday that “I personally can confirm that did not happen. He said it was a fabrication. It was not possible. The way internal security works at that embassy, it was not possible.”


Pilger called The Guardian story “an indication of a kind of degradation of the media today and especially of the ‘respectable’ media. We discussed that a great deal.”


Pilger said Assange had been the target of attacks “over the years” that have come “thick and fast.” He said:  “And for one man to cope with them is an extraordinary feat. Only occasionally does he express anger—he does it as anyone of us would feel—say on an attack like The Guardian‘s utterly false story.”