Brits And The Holocaust

'Olivia Marks-Woldman may want to point out what she and the Trust have done to stop the holocaust now taking place in Palestine at the hands of no other than the Jewish State.'

By Gilad Atzmon: The British and Jewish press reported yesterday that a poll released to mark International Holocaust Remembrance Day found that “1 in 20 British adults does not believe the Holocaust happened and 12%  think the scale of the genocide has been exaggerated.” - Nearly half of those questioned said they did not know “how many Jews were murdered by the Nazis and one in five people thought fewer than two million Jews were killed.” - This is proof, once again, that the more they dogmatically insist on trumpeting the primacy of Jewish suffering, the less people are interested in the Jewish plight. The same principle applies to anti-Semitism, the more Jewish institutions bemoan the tragedy, opposition to Jewry grows in the Kingdom and beyond.

Speaking for the Holocaust Memorial Day Trust, which commissioned the poll, Olivia Marks-Woldman told the BBC that: “without a basic understanding of this recent history, we are in danger of failing to learn where a lack of respect for difference and hostility to others can ultimately lead.” If Marks-Woldman is truly concerned about ‘respect for difference and hostility to others’ she may want to point out what she and the Trust have done to stop the holocaust now taking place in Palestine at the hands of no other than the Jewish State.
Karen Pollack, chief executive of the Holocaust Educational Trust, said in a statement that the survey showed “the need to increase education about the genocide.” How many more hours should BBC Radio 4 dedicate to the Nazi era and Jewish suffering bearing in mind that we have only 24 each day?
The Jewish press also noted that the poll results are consistent with CNN’s recent findings that one-fifth of Europeans believe Jewish people have too much influence in finance and politics, and one-third said they knew nothing at all or “just a little” about the Holocaust.  I wonder if this means that it is time that Jewish institutions examine themselves and try to figure out what is at play here.  Why are Europeans ‘denying’ the Jewish past? How is it possible that the more time, effort and money are invested in ‘Holocaust education’ the ‘less educated’ people seem to be?
But here’s the twist. The Times Of Israel reported yesterday that last December “a major European report found nearly 90 percent of European Jews feel that anti-Semitism has increased in their home countries.”  Apparently the most common ‘anti-Semitic' statements Jews heard were “comparisons between Israelis and the Nazis with regard to the Palestinians.”
Perhaps the Holocaust Memorial Trust ought to be reassured by this positive finding.  Not only do Europeans and Brits understand the Holocaust, they manage to apply its message in a universal manner. They are disgusted by fascism, racism, ethnic cleansing and oppression and happen to see Israel’s leadership as the Nazis of our time. I accept that this may be offensive for some Jews, but it does indicate that the most important lesson of the Holocaust, the importance of opposition to racism and oppression, is well and widely understood. 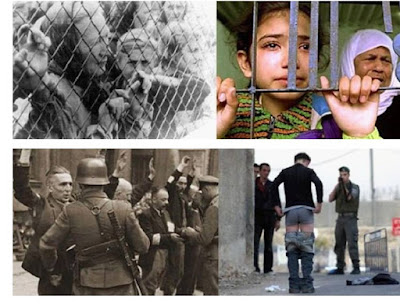 Posted by Angelo Agathangelou at 10:18 pm