Gynocentrism And The Sin Of Being Male

'The feminist strategy of subverting our education system
and embedding their ideology into scholarship and
the syllabus, is essentially a systematic form of
brainwashing of the general population.' 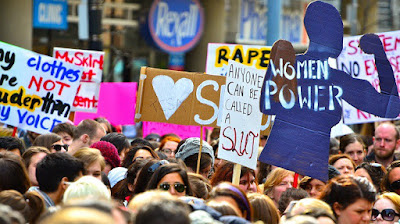 By Peter Ryan: The shaming of men and boys in our culture has been going on for a long, long time. So long in fact that there are now men and women in the population that never grew up in a time when masculinity was valued and men were viewed in a positive light. Being male in this culture is a sin. Being a white male doubly so. In my previous article, “Gynocentrism and Misandry”1, I elaborated further on how gynocentrism is associated with a belief in female superiority and that this belief system is based on the attitudes that society cultivates around masculinity and femininity.
Men and boys are devils and women and girls are angels. Men are violent, predatory, primitive and destructive. Women are peaceful, empathetic, civilised and life giving.

Posted by Angelo Agathangelou at 3:27 am