Try To Figure Out Where Labour Ends And Likud Starts 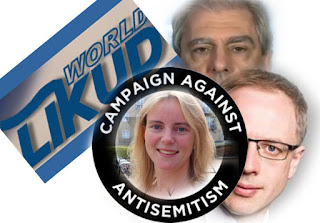 By Gilad Atzmon: A few days before Christmas, Labour Cllr Richard Watts and the Islington Council, acting at the request of the UK Likud Herut Director, chose to stop me from playing with the Blockheads. The impoverished Council, in an odd interpretation of working for its citizens, hired two partners from one of London’s most expensive law firms to help them in their crusade against my saxophone.
Their action prompted hundreds of complaints and a petition of protest from  almost 7000. Despite the backlash, another Labour councillor has stepped in to try to ruin my musical career.  Rachel Eden has in the past attempted to interfere with my literature event at Reading Literary Festival, organised a protest against me without knowing who I was and what I stood for, and is on the Zionist We Believe in Israel list of 2016 General Election candidates who pledge their support for Israel.


Cllr. Eden furthered the campaign to ruin me financially for my political beliefs by sending the following email to the Progress Theatre in Reading:
From: Rachel Eden Date: Wed, 19 Dec 2018 at 09:25
Subject: progress theatre and an anti-semite
Dear xxxx,
Hope you're well and enjoying the run up to Christmas...
Sorry to email you about something controversial but I suspect that you'd rather I let you know.  (the comments in brackets are my own GA)

I just wanted to alert you that I am sure inadvertantly (sic) Progress has taken a booking from Gilead (sic) Atzmon.  He's not a household name but he is very well known by the Jewish community as an anti-semite, last time he came to Reading he claimed that Jerusalem-ites doing mitzvot caused the Grenfell Tower tragedy:
https://www.thejc.com/news/uk-news/atzmon-blames-grenfell-tower-tragedy-on-jerusalemites-following-mitzvot-1.447012 (GA: If Mrs. Eden had actually bothered to read the JC article, she would have noticed that I emphasise that Jerusalem vs. Athens is not a Jew vs Gentile binary. I pointed out that tragedies like the Grenfell tower come about because in Jerusalem people are trained to follow patterns and regulations: as opposed to thinking authentically and ethically as in Athens.)
As you'll see from this story he was protested by a mix of Jewish and LGBT residents, he is also a holocaust 'skeptic' and Labour councillors including me. (GA: I am not a Holocaust ‘skeptic’ as I am not an historian, however, I support the idea that every event in the past must be subject to  historical analysis and revision!)
If you want to know a bit more about him the Jewish Chronicle keeps an eye on him:
https://www.thejc.com/news/uk-news/antisemite-gilad-atzmon-banned-from-performing-islington-council-1.474094  (GA: now there’s an unbiased source)

He recently lost a libel lawsuit in which was sued by the campaign against anti-semetism:(sic) (GA: I settled a libel suit with CAA’s Gideon Falter, and the issue was not relevant to antisemitism.) https://www.thejc.com/news/uk-news/gilad-atzmon-forced-to-ask-supporters-for-funds-after-campaign-against-antisemitism-libel-lawsuit-1.473179
Hope not hate have a bit about him here:
https://www.hopenothate.org.uk/2017/10/20/gilad-atzmon-heads-reading/
(GA: Hope not Hate is a notorious Zionist operation and has been exposed as such many times in the past.)
All in all I am guessing you and the committee probably didn't know any of this as he is trying to portray himself as "just" a jazz musician, but I would assume he's not the sort of person you want associated with Progress Theatre.

Posted by Angelo Agathangelou at 9:04 am