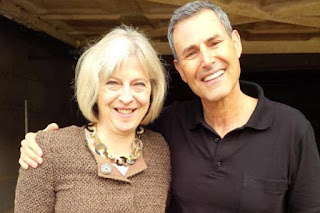 Introduction by GA: After listing his telepathic and psychic credentials Uri Geller writes to his ‘Dear Theresa,’ “I love you very much but I will not allow you to lead Britain into Brexit... I will stop you telepathically from doing this - and believe me I am capable of executing it.”
The con artist who lives currently in Israel is kind enough to give the British PM an ultimatum. “Before I take this drastic course of action, I appeal to you to stop the process immediately while you still have a chance.”
I guess that the Brits could skip the current parliamentary debate and stop pushing for a 2nd referendum as Mr Geller has already decided upon their future.

***
My Dear Theresa, We have known each other for over 21 years since you became our MP. You visited my home in Sonning, where you also lived. Three years before you became Prime Minister, I predicted your victory when I showed you Winston Churchill's spoon on my Cadillac, which I asked you to touch.
Despite popular public opinion, I also predicted that Donald Trump would become the 45th President of the United States.
As you might have read, I am ensuring that Jeremy Corbyn never gets the keys to Number 10 Downing Street, with the power of my mind which I have proved over and again.
I will ensure that they bend out of all proportion to ensure that he never takes up residence there.
My power has been validated by the CIA, MI5 and Mossad.
The CIA concluded: "As a result of Geller's success in this experimental period, we consider that he has demonstrated his paranormal perceptual ability in a convincing and unambiguous manner."
It is easily verifiable. Just look at the official CIA website.
I have influenced many high ranking officials around the world.
On one occasion, Senator Clayborne Pell, then the chair of the Senate Foreign Relations Committee, directed me to bombard the mind of Yuli Vorontsov, the Soviet Union’s chief nuclear negotiator, to influence him telepathically to sign the Nuclear Arms Reduction treaty, which I did successfully.
Now to the point of my open letter to you.
I feel psychically and very strongly that most British people do not want Brexit.
I love you very much but I will not allow you to lead Britain into Brexit.
As much as I admire you, I will stop you telepathically from doing this - and believe me I am capable of executing it.
Before I take this drastic course of action, I appeal to you to stop the process immediately while you still have a chance.
Although I currently live in Israel I am still a British citizen and feel very passionately about the country and the people I came to love.
Much energy and love
Uri

Posted by Angelo Agathangelou at 12:54 pm