Israeli Officer Explains Why Pussy Whipped US Would Get Ass Kicked By Iran, Says US Military Knows This

Israeli politician and diplomat Yakov Kedmi makes the case that the US simply cannot beat Iran in a war.
RI: He brings up many of the same points that The Saker made in his classic article about how NATO would perform in a war with Russia: that the US cannot mass forces quickly, that it does not have enough men to fight a large enemy, and that any major new commitment would force it to deplete its assets in other, geo-strategically critical regions.


Yakov Kedmi, political figure (Israel):
- There are a few aspects. In purely military terms, it's impossible to defeat Iran. It has a huge amount of territory. The Americans won't have enough forces to deploy there. The logistics are crazy, it's impossible for the Americans. So, there's no opportunity to conduct a war against Iran and win it. And the Pentagon knows that better than anyone. And they warned and said it. To advance by a few miles in small, miserable Kuwait, the Americans deployed half a million servicemen there. They strained their entire army.
- Three months.
- They prepared the operation for six months to arrange logistics for a short-term war. It's impossible in the case of Iran. In addition to that, the military thinks in a way that politicians don't. To concentrate all of the American forces in Iran means to leave the Far East unprotected and set China loose. The first thing that the Chinese will do, when Americans focus on Iran, will be to twist Taiwan's neck. Americans won't be able to do anything. The American army isn't able to conduct two medium-sized wars. It can hardly conduct a big one. That's why China will be set loose in the Far East. That's what Americans want the least.
Here's my second point. There's a commonplace phrase, everyone knows its beginning and end. Americans don't even understand what a stupid thing they did when they overthrew Saddam Hussein. Iraq is 60% Shia. You talked about Arabs in Iraq - the Shia. They're Shia. 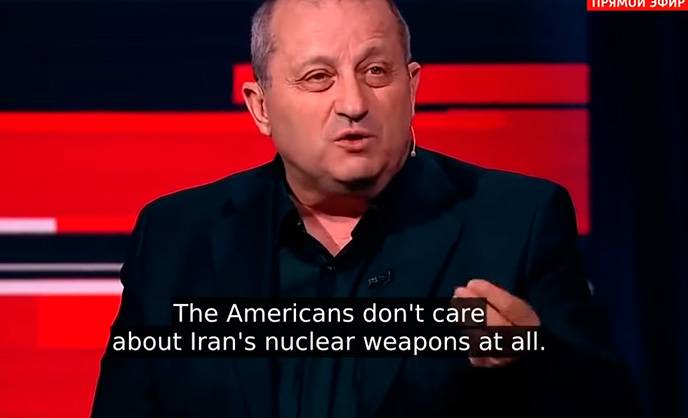 Posted by Angelo Agathangelou at 4:37 am