I Denounce The Holocaust Religion, But I Am Not Alone

‘Yeshayahu Leibowitz, the philosopher who was an observant Orthodox Jew, told me once: “The Jewish religion died 200 years ago. Now there is nothing that unifies the Jews around the world apart from the Holocaust.”’ Remember What? Remember How? - Uri Avnery 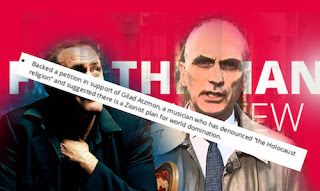 By Ex-Jew Gilad Atzmon: The Labour Party is now a comedy act. Even when it does the right thing, it is quick to admit it occurred by mistake. Three days ago the Party decided to let MP Chris Williamson back into its ranks, a decision that seemed to convince some that Corbyn finally grew a pair. Apparently, it didn’t take more than 72 hours for the party to humiliatingly reverse its decision and bow in to pressure mounted on its leadership by the Jewish Lobby, Labour Friends of Israel and, believe it or not, a bunch of party staffers who “demanded,” no more no less, an “immediate review” of the decision regarding Chris Williamson.

'Zionist world domination is not ‘a plan’ anymore, it is the reality in which we live.'
The signatories, whom according to the Jewish News included the “vast majority of remaining Jewish party staff,” wished “to remain anonymous for fear of losing their employment.” Once again we are provided with an unprecedented glimpse into the unethical nature of the Zionist operation. Our ‘anonymous’ staffers  signed on a letter demanding that the party suspends an elected MP and let him practically lose his job, yet asked to remain anonymous so that they can keep their own.
On my part, I have been entertained in the last few days seeing some of the most horrendous Labour politicians lying about me in an attempt to smear MP Williamson. Two days ago I posted a video deconstructing unfounded nonsense that MP Margaret Hodge attributed to me and also challenged the ignoramus Lord Falconer’s drivel concerning my work. Yet, I was surprised to find out that the anonymous Labour staffers actually described me accurately. The staffers demanded MP Williamson to be ejected from the party, with one reason being that “he backed a petition in support of Gilad Atzmon, who has denounced the ‘holocaust religion’ and suggested that there is a Zionist plan for world domination.”
I am here to admit that only rarely do I see my detractors referring to my words and work genuinely. However, I would like to point out to the anonymous staffers that Zionist world domination is not ‘a plan’ anymore, it is the reality in which we live. With the Zionist LFI terrorising the Labour Leadership on a daily basis, with 80% of Tory MPs being members of the Zionist CFI, with AIPAC dominating American foreign policy, with the USA and Britain launching criminal wars following Zio-con immoral interventionist mantras, Zionism dominating world politics is not an abstract ‘plan.’ It is mainstream news!
But the staffers were also genuine describing me as a person who denounces the holocaust religion.
In my work I pay great respect to the Israeli philosopher Prof. Yeshayahu Leibowitz, who coined the notion “Holocaust religion” back in the 1970s. Leibowitz detected that Jews believe in many different things: Judaism, Bolshevism, Human Rights, Zionism, ‘anti-Zionism’ but all Jews believe in the Holocaust. Leibowitz, himself an orthodox Jew, opposed the Holocaust Religion. He stated occasionally that all historical events, no matter how catastrophic, are religiously insignificant.
In 1987 Adi Ophir, another prominent Israeli philosopher, offered his own criticism of the Holocaust religion. In his paper On Sanctifying the Holocaust: An Anti-Theological Treatise, Ophir admitted that “a religious consciousness built around the Holocaust may become the central aspect of a new religion.”
Ophir listed the four commandments of the new religion:
1. “Thou shalt have no other holocaust.”
2. “Thou shalt not make unto thee any graven image or likeness.” …
3. “Thou shalt not take the name in vain.”
4. “Remember the day of the Holocaust to keep it holy, in memory of the destruction of the Jews of Europe.”
Though Ophir’s formulations are understandably dated, my work on Holocaust Religion is consistent with the critical discourse offered by the two Israeli philosophers. In The Wandering Who I argue that the Holocaust discourse in its current form contains numerous essential religious elements. It has priests and prophets. It has commandments and dogmas (e.g. ‘Never Again’) and rituals (memorial days, pilgrimage to Auschwitz, etc.). It has an established, esoteric symbolic order (good, evil, death, liberation). It also has a temple, Yad Vashem, and shrines – Holocaust museums in capital cities worldwide. The Holocaust religion is also maintained by a massive global financial network, what Norman Finkelstein terms the ‘Holocaust industry’. This new religion is coherent enough to define its ‘antichrists’ (i.e. Holocaust deniers), and powerful enough to persecute them (through Holocaust-denial and hate-speech laws).
I also argue that the Holocaust religion is the conclusive and final stage in the Jewish dialectic; it is the end of Jewish history. The new religion allocates to Jews a central role within their own universe. In the new religion: the ‘sufferer’ and the ‘innocent’ march toward ‘redemption’ and ‘empowerment.’ God is out of the game and has been sacked, having failed in his historic mission. He wasn’t there to save the Jews, after all. In the new religion ‘the Jew’, as the new Jewish God, redeems himself or herself.
I indeed denounce the new religion and for the obvious ethical and humanist reasons. The holocaust religion adheres to the primacy of one people. It is an anti-universal precept that offers no hope, mercy or compassion. It instead produces a rationale for more oppression, global conflicts and havoc. It is hardly a surprise that the many people who adhere to the holocaust are engaged in the destruction of Palestine and its indigenous people. As far as I can say, the Holocaust religion is a blind, non-empathic precept. If the Holocaust is the new global religion all I ask is for the British Labour Party, its staffers and councilors to respect my right to be agnostic, a non-believer, an atheist.
And if MP Williamson is expelled from the Labour party for me upholding such views, maybe MP Williamson should consider giving me a call and thanking me for liberating him from his reactionary Zionised party.

Gilad and All that Jazz

Posted by Angelo Agathangelou at 6:47 pm