The Majority Of #MeToo Sex Predators Are Jewish - Mamet’s Bitter Wheat, #MeToo And The Role Of Jewish Parody 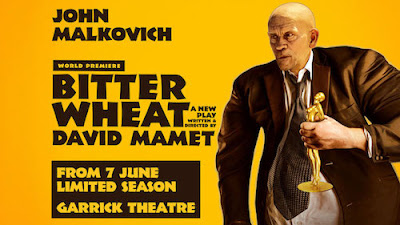 By ex-Jew Gilad Atzmon: David Mamet’s “Bitter Wheat”  tackles the contemporary saga of a Hollywood sex predator at the centre of #MeToo. Barney Fein, the protagonist of Mamet’s new play, refers to himself as a ‘fat kike.’ He is as monstrous and arrogant as anyone could possibly be. And in addition to his arrogance, his thievery of creative work and his contempt for the human race  he is also a disgusting sexual predator. As you have no doubt guessed, Barney Fein is a Harvey Weinstein-type character. No coincidence, Barney Fein rhymes nicely with Weinstein.
Mamet is a genius scriptwriter. He skillfully uses theatre to illustrate every trait of the Hollywood predator.  The choice of John Malkovich as Barney Fein is genius. He sustains your attention and shows his character as both disgusting and amusing in equal parts. Malkovich, himself a Hollywood super star, has likely met a few Weinsteins in his career.

You’ll want to see Mamet’s Bitter Wheat not because it is a great play, because it isn’t, but because it is a true window into the sophisticated and manipulative role of Jewish humour.
Mamet skillfully gives life to his monstrous narcissist character.  Barney Fein is astonishingly abrasive. He refers to himself as a Jew and displays every problematic symptom attributed to Jews by their enemies. By the end of the first half, some of the audience may harbor genuine anti-Semitic sentiments towards the main character. I assure you, these sentiments will be addressed with utmost care in the second half.
The second half begins after Barney Fein has gotten out of jail. He returns to his office to find that he is basically destroyed. Most everyone shuns him. No one will ever work with him again. If this were not bad enough, his mother has died in a ‘terror attack’ but not before she changed her will to bequeath his production company to Greenpeace and the Mossad. The second half is short and disappointing: it verges on miserable. The tension that was cleverly created in the first half evaporates as the play transforms into banal Jewish parody. Barney’s disastrous symptoms morph into comic traits. Barney is dangerous no more, he is merely an absurd satirical act, a victim of his own symptoms.
As much as Mamet is dexterous in his art form, he isn’t too original here. Owning one’s symptoms is the new Jewish American trend.
The Israeli historian Shlomo Sand pointed out that traditional Jewish humour, would be better described as ‘Yiddish humour,’ Sand noted that Albert Einstein, Kafka and Spinoza did not spend much time cracking Yiddish jokes about their wider community. What we regard as Jewish humour is largely a Yiddish, folkish cult. It was the means by which the Ostjuden (Eastern Jews often described as  ‘Yiddish People’) dealt with their ordeal. Most 19th century Yiddish jokes centered on a narrative in which the ordinary Jew outsmarted the dummkopf Goy. There are endless variations on this somewhat racially- orientated theme but always it is the Jew who wins out, leaving the poor, befuddled Goy confused by his own gullibility.
Of course this was not the reality on the ground. It was not the Gentile who was left behind but the Ostjuden. It was the Eastern Jew who was surrounded by ghetto walls and oppressed by a hostile environment.
Nineteenth century Yiddish humour allowed the Yiddish-speaking Eastern Jew to identify with the Western Ashkenazi elite and look down on his local gentile oppressors. A  joke allowed an Eastern Jew to elevate himself to the rank of a Rothschild or a Warburg.
While Jewish humour is always political, in that it always conveys a social, ideological and spiritual message, 20th century American Jewish humor has radically transformed the message. Instead of ridiculing the gullible Goy, modern American Jewish humour is there to own the Jewish symptom. Woody Allen mocks the Zelig chameleon character . Larry David’s ‘Curb Your Enthusiasm' ridicules the self-centred hedonist. Mel Brooks exaggerates Jewish symptoms ad absurdum and Sarah Silverman confessed that she “wants to kill Christ again.”
These Jewish comedians have made self-deprecation into an art form. By sarcastically mocking Jewish stereotypes, they disarm opposition to or criticism of Jewish dominance and political power. By openly owning what some regard as problematic Jewish symptoms, these entertainers manage to dismantle, or at least, suppress the dissent. When the so-called ‘anti-Semite’ accuses the Jew of being hedonistic, self-centred, a capitalist, usurious, a Christ killer, pro immigration and even a sex predator,  David, Allen, Silverman Brooks and Mamet’s  answer is simply: ‘Okay, now tell us something we don’t know.’


Posted by Angelo Agathangelou at 3:06 am