Feminism Celebrates Its Degeneration Into Crime

I used to think strippers who drug & rob men were scum. Turns out they are ‘EMPOWERED FEMINISTS’ 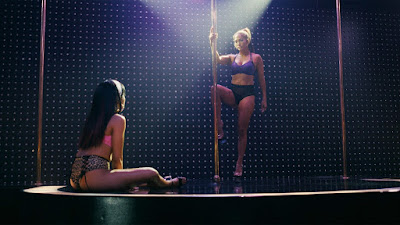 By Igor Ogorodnev: You can enjoy 'Hustlers,' the new film starring Jennifer Lopez, on its own terms. But to celebrate its heroines – based on real-life scammers who victimized people – as feminist role models is twisted and morally bankrupt.
This is not another one of those on-trend critiques that rejects fiction unless it faithfully amplifies my real-life political views. I am also fully aware of the vicarious white-collar pleasures of watching sympathetic criminals do reprehensible things on-screen, as in, say, 'Goodfellas' or 'The Wolf of Wall Street,' the films that served as the self-conscious template for the competently made 'Hustlers.'

'You can poison a man, because he is a man...'
That’s not to say that, even as an aesthetic experience, the story of a crew of multiracial strippers conning white Wall Street bankers in post-2008-crash New York leaves a particularly wholesome aftertaste.
There is supreme cynicism in the way the gang justifies each action by glibly comparing America to a one big strip club – this is the final line in the film – in which everyone is out for themselves. Tell that to the building site worker finishing his 12-hour shift, the emergency department doctor, or the barmaid who doesn’t triple swipe the customer’s credit card.
Or the way the camera manipulatively exploits the strippers’ children as a human shield for their behavior. She just wanted a nanny for her straight-A student daughter! And the next scene wallows in naked materialism as its heroes gift each other Louboutins and chinchilla coats.
Or the contradictions in how the film co-opts the characters’ disadvantaged backgrounds for political underdog kudos, but lets them brag about earning more than a neurosurgeon (but evidently not enough to help them leave a life of crime).
How it dehumanizes the men, who are victim-blamed as deserving marks for having the gall to go and ask for a private dance, or make a lewd comment, or just be rich (one assumes that the perpetrators did a thorough audit to find out whether they had gained the money through virtuous methods). And whose bodies, often helpless from the administered drugs, are used as comedy props with a delighted cruelty.
Its reactionary and sex-shaming attitude to strip clubs and sex work is portrayed as an inherently repulsive monetary exchange between hear-of-gold victims and wife-cheating perverts and losers, as opposed to an activity involving ordinary consenting adults.
None of that is a deal-breaker – a film can have its viewpoint, and judging by the prediction that it will go straight to the top of the US box office this weekend, it is one shared by a sufficient number of the audience. 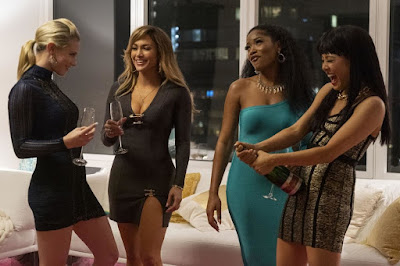 No, the real slap in the face is that we are told, both by producer Lopez, director Lorene Scafaria, and by dozens of fawning reviews and articles, that this film somehow represents a triumph of feminism, because these are “empowered” women who are “reversing the roles” and “taking control,” that they are “Robin Hood thieves”sticking it to the man.
It makes me feel like I am living in a parallel moral universe. I genuinely struggle to understand.
To me, gaining someone’s trust, then forcing them to unknowingly ingest horse tranquilizer, mugging them, then dumping them semi-conscious, and blackmailing them if they later say they’ll go to the police, is one of the scuzziest crimes. Not some fun caper. That betrayal of trust is an ordinary citizen’s worst nightmare every single time they go to a bar, or a club, or a restaurant; every time they book an apartment rental or get into a cab. If the scenarios depicted in the film happened to any man in your life – your brother, your dad, your friend, your boss – would you really go “Oooh, that was empowering!”
And it really did happen, to actual people, which makes the glamorization even more grotesque.
Here is an excerpt from the original New York Magazine 2015 story on which the film is based.
“One [victim] was Fred, the father with the autistic son. As it turned out, one of the credit cards they’d maxed out was corporate. His company had launched an internal investigation, and Fred had been fired. Later, after starting a new job, he was informed his name had been reported to an agency that tracks white-collar crime, and he was fired again. Since then, he’s been fortunate enough to find a consulting job, but he lives in fear of being found out by his current employer. ‘I wake up in the morning thinking about it,’ Fred told me. ‘Every day, once or twice a day, I feel the barrel of the gun against my head.’”
I bet Fred – who to the film’s credit is not cut out of the story - is loving cineplexes cheering on his tormentors, none of whom even served any time in jail, and several of whom are proudly riding the wave of publicity on their Instagram accounts.
Is this where we are with feminism now? That you can poison a man, because he is a man?
Similarly, yes, America is a land of great financial disparities, and no, Bernie might not be the next president (though it is not like he is barred from running). Does that mean that any wealthier person is fair game, and next time any of us are in a room with a millionaire, we should just take them out with a chloroform sponge? I wonder if the bourgeois creative types and journalists realize on which side of the barricades they are here.
Also, if these cosmopolitan American fraudsters, who are still incredibly privileged and rich by international standards, just from earned dance tips alone, could only exist through crime and not honest work, what does that leave the billions around the world who are poorer in more inequitable societies, without anything like the same safety net? Presumably, gang membership, a Maoist uprising, or suicide.
Now all this might seem like a hyperventilating overreaction to what is just a piece of wish-fulfilling entertainment. But to me, the wall-to-wall celebration of the ethics of 'Hustlers' shows yet again that the parts of the movement for social justice have turned anarchic, vindictive, and inhumane.


Posted by Angelo Agathangelou at 8:40 pm