The End Of Jewish Israel 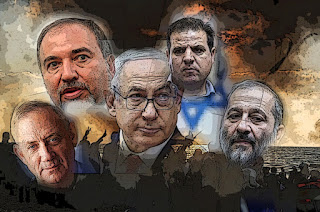 The Gentiles are in relatively good shape.. They simply need to survive. Jewish Israel seems to be Jewish Israel’s fiercest enemy.
By ex-Jew Gilad Atzmon: The lesson to be drawn from the current Israeli political stalemate is that Israel is imploding, breaking into the elements it has never managed to integrate into one. The schism is no longer the more quotidian dichotomy of Ashkenazi vs. Arab Jews (aka Sephardim); this divide is ideological, religious, spiritual, political, ethnic and cultural. Nor does it break down to Left and Right, Jewish Israelis are politically with the right even when they pretend to be ‘Left.’ Although some of the most astute critical voices of Israeli politics and Jewish fundamentalism are Israelis (such as Gideon Levi, Shlomo Sand, Israel Shamir and others), there is no political Israeli Left. Israeli politics break down into a lot of extreme right voters and many ordinary hawks. The Arab Joint List Party is practically the only Left party in the Israeli Knesset. This should not be surprising any more. Jewish Left, as I have been arguing for many years, is an oxymoron; Jewishness is a form of tribal identification and Left is universal. The ‘tribal’ and the ‘universal’ are like oil and water, they do not mix very well.


What is peculiar about the Israeli political divide is that the Israelis are more united than ever in their nationalist beliefs and in the primacy of their Jewish symptoms. Why is it, if the Israelis are so unified, that no one can form a government in their so-called ‘Jewish State’?


Avigdor Lieberman, formerly an enthusiastic Netanyahu ally and himself a radical Jewish nationalist, delved into the Israeli political deadlock yesterday. He maintained that the elections had already been decided: "The ultra-Orthodox and Messianic bloc reaches 62-61 seats." The leader of the rabid nationalist Yisrael Beiteinu said, "If there is no voting rate of at least 70% in Gush Dan and Sharon, the Halacha government will be established."


Basically, Lieberman said that unless secular Israelis in Tel Aviv go to the polls, they should expect to live in a Halacha State under an ultra right wing Netanyahu government.  Lieberman appears to hold the key to Israel’s political stability. Although he and Netanyahu are ideological twins regarding Israeli security and nationalist matters, the two are bitter rivals who fight aggressively against each other. Netanyahu has known for a few years that, absent a strong ultra right wing government, he can expect to spend some time behind bars, an adventure that has become common for Israel's prime political figures.  Netanyahu’s natural partners are the ultra right parties and the orthodox parties. Ideologically, Lieberman should also feel comfortable within such a political coalition but Lieberman has made a crucial political decision, essential for his political survival. A while back he grasped that his political home base, Jewish immigrants from the former Soviet Union, many of them barely Jewish and subjected to constant rabbinical terror, regard the Jewish Orthodox parties as their ultimate foes. Many of these Russian and Ukrainian Jews hold ultra right wing political positions but also see the Rabbis as an imminent threat to their survival.


Theoretically, Lieberman could broker a huge unity coalition with Netanyahu at the top, joined by Blue and White (Kachol Lavan) and its three right wing field marshals, Lieberman’s own party and probably the Labour party. Such a coalition would hold around 80 Knesset seats, more than enough to sustain a strong government but this coalition would refuse to guarantee Netanyahu’s immunity.


Netanyahu gambles instead on a weak ultra right wing religious government, a government that may not hold for very long but would buy more time for its PM to stay out of jail.


This conflict at the heart of Israeli politics is a window into the Jewish state and its fears. Israel is rapidly becoming an Orthodox Jewish state. Israel’s Orthodox Jews are the fastest growing group in the country. They are also the country’s poorest population, 45 percent live below the poverty line in segregated communities. Ordinarily, one would expect the poor to support the left, but Israeli Torah Jews are rabid nationalists and openly lend their support to Benjamin Netanyahu and his party.


Prof. Dan Ben-David of Tel Aviv University warned recently that Israel could cease to exist in a couple of generations. He pointed to the astonishingly high birth rate among ultra Orthodox Jews and predicted that, based on current trends, they will comprise 49% of Israel’s population by 2065. The ultra Orthodox parties are destined to dominate the Knesset within a generation or less. Ben David  predicts that their dependence on Israel’s welfare system will lead to a rapid decline is Israel’s economy. This is economically damaging enough and is made worse by the refusal of most rabbinical schools to incorporate standard Western subjects such as mathematics, science and English into their core curriculum. Consequently, Israel is educating a growing percentage of its population in a fashion that fails to equip them to contribute to the needs of a hi-tech society that is immersed in a conflict for survival.


The picture that comes across is peculiar. As Israel becomes increasingly Jewish and fundamentalist in its nationalist and religious ethos, it has also become more divided on everything else. The Russian immigrants find it impossible to live alongside the ultra Orthodox and vice versa. The secular enclave in Tel Aviv is committed to seeing their metropolis as an extension of NY. The Israeli Left has morphed into an LGBT hasbara unit. It has practically removed itself from the Israeli/Palestinian conflict. Jewish settlers adhere to the concept of a ‘Two Jewish States Solution.' They want to see the West Bank become a Jewish land. Orthodox Jews are barely concerned with any of these political issues. They well know that the future of the Jewish state belongs to them. All they need to do is sustain a productive secular Jewish minority to serve as their milk cow.  On top of all of that we face Bibi’s survival wars that threaten to escalate any minute into a world conflict.


In light of all of this, the Palestinians are in relatively good shape.. They simply need to survive. Israel seems to be Israel’s fiercest enemy.

Posted by Angelo Agathangelou at 9:45 pm