The Texas, USA Death Penalty Only Applies To Non-Jews - It Doesn't Apply To The Jews

Should anyone convicted in such a trial be entitled to a new trial? Or is a new trial to be granted only to Jews? Is it now the rule that discrimination is a problem only against an ethnicity that has a powerful voice in government? Do the 100 Jewish lawyers who signed the brief regularly sign such briefs for those they call 'Goyim & Shiksa' defendants? 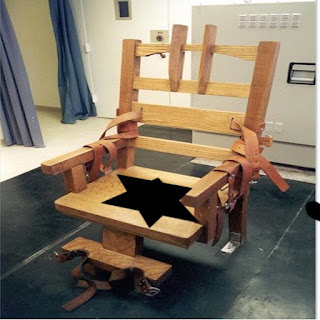 By Eve Mykytyn: The New York Times recently ran a story entitled “Texas Stays Execution of Jewish Man After Judge is Accused of Anti Semitism.”  The headline and the story imply that Randy Halprin, was, although possibly guilty, the victim of anti Semitism. - Let’s look at the story a little more carefully. (To the extent this is a disclaimer of bias, I am generally opposed to capital punishment and have wasted much time unsuccessfully working to keep the state from killing convicted criminals.)
First the Crimes:

Posted by Angelo Agathangelou at 11:17 am