'If the United States had a rule of law, something as serious as 9/11 could not have gone for 17 years without investigation.' 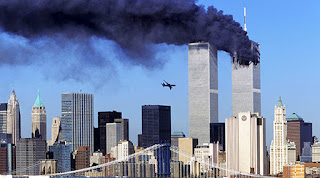 By Dr. Paul Craig Roberts: Although the United States is allegedly a democracy with a rule of law, it has taken 17 years for public pressure to bring about the first grand jury investigation of 9/11. Based on the work of Architects & Engineers for 9/11 Truth led by Richard Gage, first responder and pilots organizations, books by David Ray Griffin and others, and eyewitness testimony, the Lawyers’ Committee for 9/11 Inquiry has presented enough hard facts to the US Attorney for the Southern District of New York to force his compliance with the provisions of federal law that require the convening of a federal grand jury to investigate for the first time the attacks of September 11, 2001. https://www.lawyerscommitteefor9-11inquiry.org
This puts the US Justice (sic) Department in an extraordinary position. Every informed person is aware that elements of the US government were involved either in the perpetration of the 9/11 attacks or in a coverup of the attacks.

By Paul Elam: I’ve had many, many conversations over the years with blue pill men about red pill ideas. Interestingly, most of the men I’ve talked to have been pretty open to what I was talking about. At least in general terms my observations about men, women and the behavior typical to both resonated with them. I’ve routinely found men nodding agreeably as I described some of their not-so-positive experiences with women in relationship life. They did so even as some of them instinctively glanced over their shoulder, as if to make sure no one was seeing them agree with me.
Plenty of them even quietly acceded to my calling them out on their tendency to tolerate abuse, to enable and play white knight in order to stay out of the dog house. A life spent in some measure of frustration, trying to placate an errant child, of jumping through hoops to keep an uneasy peace is common to a lot of men. Sure, some men don’t share this experience. And some men claim they don’t. You can hear them bragging about how they are in charge of relationships when the woman isn’t listening. But most men I have talked to in relationships identify with this to one degree or another.
Most of them can chuckle at themselves a little bit when they talk about how they put up with the childish demands and entitled attitudes of their female counterparts. Some of them, without compunction, even cast themselves metaphorically as powerless little schoolboys, fearful of being sent to the principle’s office, represented by the disapproval of their wives or girlfriends.

Life Is What You Make It

Use It Or Lose It

"Freedom of speech is being assaulted
in every direction that you can see." Said David Icke.
Posted by Angelo Agathangelou at 1:27 pm No comments: Links to this post

The Goddess, The Jade Rabbit And The Magpie Bridge - Chinese Culture On The Far Side Of The Moon

Moon of Alabama: An extraordinary mission by the China National Space Administration helps us to learn a bit of ancient and modern Chinese culture.
Today at 2:26 utc the lunar lander module Chang'e-4 and its six wheel rover Yutu-2 landed on the far side of the moon. They used the Queqiao relay satellite to send us the first ever close range pictures (see below) of the far side of the moon.

The names Chang'e, Yutu and Quegiao have no meaning for people who grew up in 'western' cultures but are well known throughout Asia:


In a very distant past, ten suns had risen together into the skies and scorched the earth, thus causing hardship for the people. The archer Yi shot down nine of them, leaving just one sun, and was given the elixir of immortality as a reward. He did not consume it straight away, but hid it at home, as he did not want to gain immortality without his beloved wife Chang'e.
Read more »
Posted by Angelo Agathangelou at 8:04 am No comments: Links to this post 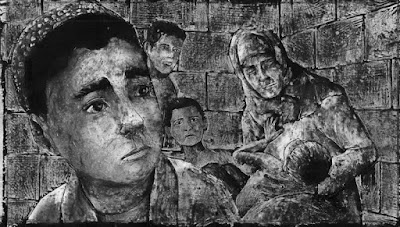 By Mousa Tawfiq: On 3 January, 10 years ago, the ground invasion stage of Israel’s 2008-2009 assault on Gaza began.
Left: A scene from Samouni Road, which uses animation to show life before, during and after the attack that claimed nearly two dozen members of a single family.
As with much else during what is known as Operation Cast Lead, the Israeli army exploited its massive military advantage to the full. Palestinians in Gaza paid a devastating price.
More than 1,400 people were killed in Gaza during the attack. The vast majority, some 1,200, were civilians.
Among them, few suffered more than the Samouni family.
Twenty-three members of the extended family were killed in two separate incidents on 4 January and 5 January 2009. Twenty-one of those perished in a missile strike on a house they had been ordered into by Israeli soldiers on the ground. The UN subsequently deemed the slaughter of the Samounis to be war crimes, but Israel – which denies the accusation – has never been held accountable.

"Plutocrat-controlled and government-enmeshed media networks hire reporters to protect the warmongering oligarchic status quo upon which media-controlling plutocrats have built their respective kingdoms."
Submitted by Caitlin Johnstone: A journalist with NBC has resigned from the network with a statement which highlights the immense resistance that ostensibly liberal mass media outlets have to antiwar narratives, skepticism of US military agendas, and any movement in the opposite direction of endless military expansionism.

“January 4 is my last day at NBC News and I’d like to say goodbye to my friends, hopefully not for good,” begins an email titled ‘My goodbye letter to NBC’ sent to various contacts by William M Arkin, an award-winning journalist who has been associated with the network for 30 years.
“This isn’t the first time I’ve left NBC, but this time the parting is more bittersweet, the world and the state of journalism in tandem crisis,” the email continues. “My expertise, though seeming to be all the more central to the challenges and dangers we face, also seems to be less valued at the moment.