An historic interfaith covenant was signed in the
Middle East on Monday, and the lame-stream media
has been almost entirely silent about it... 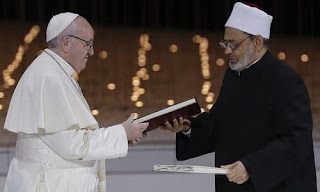 Authored by Michael Snyder: A historic interfaith covenant was signed in the Middle East on Monday, and the mainstream media in the United States has been almost entirely silent about it.
Sheikh Ahmed al-Tayeb is considered to be the most important imam in Sunni Islam, and he arrived at the signing ceremony in Abu Dhabi with Pope Francis “hand-in-hand in a symbol of interfaith brotherhood”.
But this wasn’t just a ceremony for Catholics and Muslims.  According to a British news source, the signing of this covenant was done “in front of a global audience of religious leaders from Christianity, Islam and other faiths”...

"Embrace one another, kiss one another."
Read more »
Posted by Angelo Agathangelou at 10:04 pm No comments: Links to this post

Deal Of The Century

If Americans Knew: In anticipation of the US authored peace deal between the Jewish state and a Palestinian state, which may be released imminently by the White House, If Americans Knew looks back at some key facts about the so-called “Deal of the Century”. 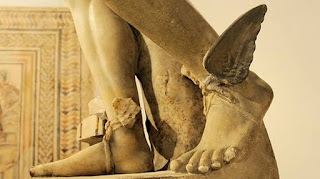 By Doug Mortimer: You might be surprised to find out that Peter Pan is not some ancient folkloric figure but is relatively new, historically speaking.  He may have been loosely inspired by the Greek god Pan, but in fact he was born in the 20thCentury.
The character of Peter Pan was created by Scottish author J.M. Barrie, who wrote Peter Pan, or The Boy Who Wouldn’t Grow Up, a play that debuted in London on December 27, 1904.  Over the years, with a big boost from Walt Disney in 1953, Peter Pan, Tinkerbell, Captain Hook, Wendy, et al have passed into popular culture. Peter Pan peanut butter?  Hard to believe, but that goes back to the 1920s.  Just why this brand name was selected is a mystery, but perhaps it was because kids like peanut butter, so the name Peter Pan implies that, at least in this case, it is OK for adults not to grow up.  Enjoy your second childhood by scarfing up peanut butter!
In more recent decades, Dr. Dan Kiley popularized the phrase “Peter Pan Syndrome” via his 1983 book The Peter Pan Syndrome: Men Who Have Never Grown Up.  The phrase has also passed into popular culture, so even people who never read the book use the phrase (in more recent years, the term “failure to launch” has become a worthy competitor).
Read more »
Posted by Angelo Agathangelou at 4:25 pm No comments: Links to this post

Bolshevik Jews were the chief architects of the Ukrainian forced-famine which eliminated Ukrainian clergy and 6 million Ukrainian Orthodox Christians! 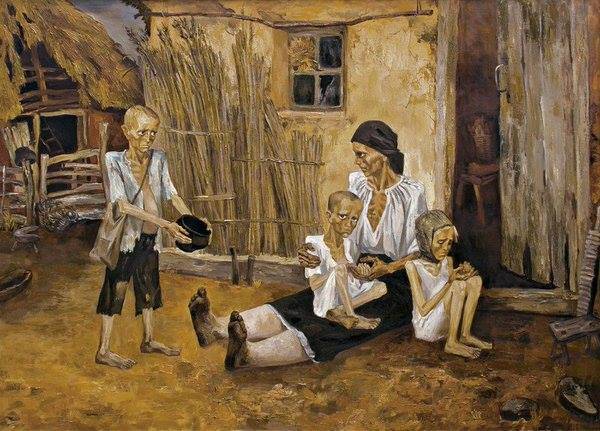 By Brother Nathanael: JEWS WANT THE WORLD to believe that they have a monopoly on “Holocaust Remembrances.” But Ukraine’s President Viktor Yushchenko has thrown the Jews a curve by dedicating 2008 as “Ukrainian Holocaust Remembrance Year” Here.
This “holocaust remembrance” recalls the murder by forced starvation of *6 million* Ukrainian Christians by the Jews. The Ukrainians call this holocaust “Holodomor” which means “Famine-Genocide.” Of course the Zionist Jews deny it. Just like they deny all of their numerous crimes against humanity.

Read more »
Posted by Angelo Agathangelou at 1:35 pm No comments: Links to this post

"Authorised by the department of making your auntie our bitch."
thejuicemedia: The Australien Government has made an ad about the ABC, and it's surprisingly honest and informative!
Posted by Angelo Agathangelou at 9:33 am No comments: Links to this post

Is Putin Too Polite? 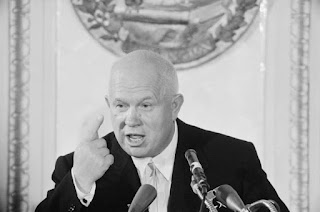 By Dr. Paul Craig Roberts: The article below by Gilbert Doctorow echos my own expressed apprehensions about Putin’s extraordinary restraint in the face of extraordinary provocations. I admire Putin for his restraint, which is totally missing among his Western counterparts. Nevertheless, I have expressed concern that the same restraint that is preventing war might be leading to war. Many historians of World War II concluded that it was British Prime Minister Chamberlain’s good intentions to defuse conflict situations rather than to put down a firm foot that encouraged Hitler to go too far.
Doctorow is certainly correct that no Western politician would have spoken to or about any Soviet leader as they do about Putin. The situation has reached the point of extreme recklessness with the UK government declaring that it is preparing for war with Russia. During the Soviet era no UK government would ever have declared anything so preposterously provocative. Russia can wipe the UK off the face of the earth in a few minutes, and the British defense minister declares that Britain is preparing for war against Russia!
Putin is an intelligent, polite, accommodating and reasonable leader, the like of which exists nowhere in the Western world.

Goy Citizen Of Jewish Israel Forced To Demolish His Home

With a 4% approval rate on building permit applications from Palestinians, and application costs in the tens of thousands of dollars, a large number of Palestinians make the risky decision to build without a permit. When Hassan Othman’s “illegal” home was discovered, he saved part of the $80 thousand demolition fee by hiring equipment to do it himself.
The Jewish apartheid Israel regime has demolished over 48,000 Palestinian structures since 1967.

In order to avoid demolition fees by Israeli forces, a Palestinian man was forced to demolish his own home [Arab48]
From Middle East Monitor: A Palestinian citizen of Israel was forced to demolish his house yesterday to avoid being fine demolition fees by Israeli occupation forces, Arab48 reported.
Hassan Othman, who lives in the Arab-Israeli city of Sakhnin, had to demolish his property for the second time to avoid having Israeli bulldozers doing the work as charging him for it. Othman’s house was first demolished 18 months ago under the pretext that it lacked the necessary building licenses.
Read more »
Posted by Angelo Agathangelou at 4:18 am No comments: Links to this post

Janice Fiamengo
Read more »
Posted by Angelo Agathangelou at 12:15 am No comments: Links to this post