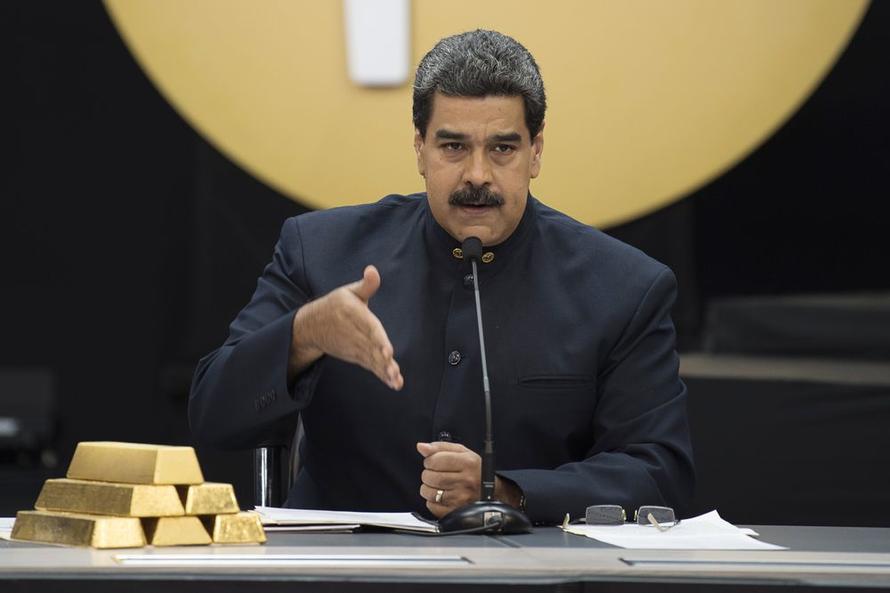 By Tyler Durden: The International Monetary Fund is reportedly making plans for the "day after" embattled President Nicolas Maduro's fall, according to Bloomberg. Though there's been little momentum in military defections following US-backed opposition leader Juan Guaido's offer of amnesty to any army officer that switches loyalties, Washington sanctions have effectively strangled state-owned PDVSA's access to global markets. News of IMF maneuvering also comes amidst fresh reports the US is amassing aircraft, troops and armored vehicles on the Venezuelan border under the pretext of getting humanitarian aid into the country.
The only significant cash flow that remains after the oil sanctions is through India, Venezuela’s second-biggest oil market after the United States, which still recognizes the Maduro government, and is now reportedly seeking to avoid purchases through US banks and even financial institutions with a heavy US presence. According to a Reuters report on Friday, "India has asked one buyer of Venezuelan oil to consider paying the South American nation’s national oil company PDVSA in a way that avoids the U.S. financial system, an Indian government source said, after Washington imposed fresh sanctions on Venezuela last month."

Gynocentrism And The Sin Of Having A Penis

By Peter Ryan: The shaming of men and boys in our culture has been going on for a long, long time. So long in fact that there are now men and women in the population that never grew up in a time when masculinity was valued and men were viewed in a positive light. Being male in this culture is a sin. Being a white male doubly so. In my previous article, “Gynocentrism and Misandry”1, I elaborated further on how gynocentrism is associated with a belief in female superiority and that this belief system is based on the attitudes that society cultivates around masculinity and femininity.

Men and boys are devils and women and girls are angels. Men are violent, predatory, primitive and destructive. Women are peaceful, empathetic, civilised and life giving. These attitudes we have about men and women and the associations we make with masculinity and femininity, distort our perception of reality and our behaviour toward the sexes. At the macro level this impacts our culture, how we raise the next generation, how we run society and shape policy and laws and it also importantly impacts the future direction of society.

The Israeli Lobby Is The Deep State


“…Rep. Ilhan Omar, D-Minn., responded sharply to reports that Republican leader Kevin McCarthy was targeting both Omar and fellow Muslim Rep. Rashida Tlaib, a Democrat from Michigan.
Omar quoted rap lyrics — “It’s all about the Benjamins baby” — to suggest McCarthy’s move was driven by the lobby’s prolific spending. Asked specifically who she was referring to, Omar responded, “AIPAC!” (The Intercept)

Read more »
Posted by Angelo Agathangelou at 5:41 pm No comments: Links to this post

NPR’s ‘All Things Considered’ segment underreports AIPAC’s finances, uses only Israel partisans as commentators, minimizes power of AIPAC, ignores Palestinians, and fails to inform listeners of the full scope of the Israel lobby

Washington D.C. headquarters of NPR, National Public Radio
By Alison Weir: A recent NPR report, “Unpacking What The American Israel Public Affairs Committee Does,” misleads listeners on several points.
The report is in response to freshman Democratic Congress member Ilhan Omar’s tweet that AIPAC is the cause of U.S. politicians’ support for Israel over U.S. needs and principles. Omar has come under numerous attacks ever since.
NPR’s report, broadcast Wednesday, substantially downplays the power of AIPAC. In doing so, it suggests that Omar’s comments were “antisemitic,” while failing to interview anyone with different views.

"Me thinks there's some rats on Capital Hill"
Ex-Jew Nathanael
Posted by Angelo Agathangelou at 4:38 am No comments: Links to this post

Max and Stacy check out Bernie Sanders and Chuck Schumer’s ideas on restricting share buybacks. The two senators want to restrict buybacks unless the company in question pays their employees at least $15 per hour. They look at the recent history of share buybacks to a time when it was illegal to engage in the practice.