By Alison Weir: The Associated Press sent out two versions of a story on responses to Ilhan Omar’s comments regarding the Israel lobby. Both were entitled “Omar’s edgy Israel tweet no surprise to some back home.” One version was slanted; the other made that one look good.

AP’s longer report led off with accusations against Omar claiming she was “antisemitic,” and stated that the concerns were “confirmed.”
Only at the end of five long paragraphs did the report finally mention that some people disagree with the accusations.


The story then included comments on “both sides.” The problem is that the article gave significantly more space to individuals who claimed Omar is “antisemitic” as to those who defended her.
While the long article includes quotes from local Jewish and Muslim communities, it failed to include comments from a Christian organization in the area that focuses on Palestine,  which could have described how false claims of antisemitism are often used to silence criticism of Israel.

Read more »
Posted by Angelo Agathangelou at 9:04 pm No comments: Links to this post

Putin Threatens US Soil If Missiles Deployed in Europe 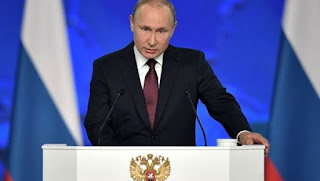 An arms race imminent between Washington and Moscow with the death of Cold-war era arms control treaty.

telesur: Russian President Vladimir Putin, during his annual presidential address to the legislature Wednesday, criticized the United States for ignoring the Intermediate-Range Nuclear Forces (INF) treaty by deploying missile launchers in Romania and Poland.
"First it started developing and using intermediate-range missiles it deceitfully called targets for missile defenses. Then it began to deploy the Mk-41 launchers in Europe, capable of using intermediate range cruise missiles Tomahawk for combat purposes," he said.
"By doing all this the United States blatantly ignored the provisions contained in articles 4 and 6 of the INF Treaty."
Russia will respond to any U.S. deployment of short or intermediate-range nuclear weapons in Europe by targeting not only the countries where they are stationed but the United States itself, Putin warned.
He also said that the U.S. should calculate the flight range and velocity of Russian weapons before taking steps that can pose a threat to Russia.
"This is certainly their right to think this way. But can they make the calculations? Undoubtedly they can," Putin said. "So let them calculate the range and speed of our advanced weapon systems."

Jewish Israeli fingerprints are all over the war in Yemen, from cyber spyware to hitmen; Americans are also deeply involved, as well as individuals and companies from other Zionist captured countries…


By Zvi Bar’el: “If Iran tries to block the Bab al-Mandab strait, I’m sure it will find itself facing an international coalition determined to prevent it. This coalition will include all Israel’s army branches as well,” declared Benjamin Netanyahu in August, following Iran’s threats against American sanctions.


Such a coalition had already been set up in 2015 by Saudi Arabia, who partnered with the United Arab Emirates, Bahrain, Egypt and Pakistan. Israel is also an unofficial partner. Israeli cyber companies, gun traders, terror-warfare instructors and even paid hitmen operated by an Israeli-owned company are partners to the war in Yemen.
Read more »
Posted by Angelo Agathangelou at 11:58 am No comments: Links to this post

Staged Chemical Attack Videos And Other Trends In Modern Propaganda

Submitted by Southfront: The scandal regarding the fake hospital video published by the White Helmets as a proof of the Douma chemical attack has reached its peak in the media and has caused reaction on the diplomatic level.
On February 13, BBC Syria’s producer Riam Dalati came out with a statement that “After almost 6 months of investigations” he “can prove without a doubt that the Douma Hospital scene was staged” and “no fatalities had occurred in the hospital.” Dalati added that he believes that “the attack did happen” but no Sarin was used and “everything else around the attack was manufactured for maximum effect.”


Read more »
Posted by Angelo Agathangelou at 8:15 am No comments: Links to this post

Press TV: The Venezuelan president has slammed his U-S counterpart for his latest rhetoric against the Latin American nation. Nicolas Maduro called Donald Trump’s comments as Nazi-style. Maduro said Trump is in no position to deliver orders to the Venezuelan army. This comes after Trump called on the Venezuelan military to abandon Maduro and switch allegiance to opposition leader Juan Guaido.
Posted by Angelo Agathangelou at 6:08 am No comments: Links to this post

US Cop Arrests 11-Year-Old Over Pledge Of Allegiance

Jimmy Dore
Posted by Angelo Agathangelou at 3:21 am No comments: Links to this post 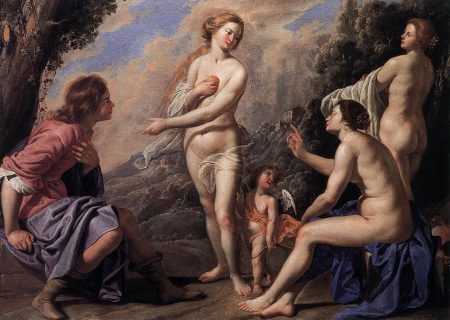 By Author Douglas Galbi: A leading U.S. high-brow magazine recently published an interminably boring article on the “sex recession.” One missing observation is that, while having less sex, women are dressing more provocatively. Women in yoga tights showing in close definition everything are omnipresent on the streets. Women in college classes and libraries dress as if they were at the beach. Is it sexual harassment via the male gaze for an old man to read what’s printed on the rear of a young woman’s short-short shorts? I’m still waiting for my lawyer’s advice, but I’ve heard that one word written there is “PINK.” As always, classical literature provides enduring truths about beauty and humanity. Consider a classical story commonly known as the Judgment of Paris. To celebrate the marriage of Achilles’s parents Thetis and Peleus, the nominal head god in charge of the cosmos Zeus held a wedding banquet. He naturally didn’t invite Eris, the goddess of discord. She arrived uninvited, enraged as usual. To stir up strife, she threw a golden apple amid a throng of women. On the golden apple was written “to the most beautiful one {καλλίστῃ}.” The goddesses Juno, Minerva, and Venus all quickly claimed sole right to the golden apple.