Mike Buchanan: Elizabeth Hobson is the Director or Communications at Justice for Men & Boys https://j4mb.org.uk, and an anti-feminist. Elizabeth Halden is an American feminist. The title of the discussion in Oxford Town Hall was, "Can free speech end the Sex War?"
Posted by Angelo Agathangelou at 10:52 pm No comments:

By Tyler Durden: In a surprising and provocative ultimatum, Syria has notified Israel through United Nations diplomatic channels that it is prepared to go to war if Israel does not leave the Golan Heights. 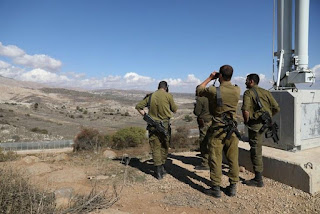 Israeli death forces at border fence along Israeli-occupied side of the Golan Heights and Syria, via Reuters.
Syrian Deputy Foreign Minister Faisal Mikdad reportedly sent the message through the head of the United Nations Truce Supervision Organization (UNTSO), Christine Lund, this past week, according to a World Israel News report and later picked up other major Israeli sources, including The Jerusalem Post. “Syria will attack Israel if it does not leave the Golan Heights,” Mikdad told the UN representative.
Mikdad further warned Lund that Syria will respond with force should Israel continue its attacks on Syria, which have occurred more than a dozen times over the past year, but which seem to have recently paused following Russia's announced delivery of the advanced S-300 anti-air missile defense system to Damascus late last year.   “We will not hesitate to confront Israel,” Syria's Mekdad said. “We are also not scared away by its [Israel’s] supporters who are helping to perpetuate the occupation of the Golan,” he added.

Read more »
Posted by Angelo Agathangelou at 7:37 pm No comments:

Max and Stacy discuss the social credit score in China blocking over 20 million citizens from travel and how that same system is being deployed similarly in the West with perhaps a nicer user interface from Facebook and Obamacare. They look at new patent filings from Facebook suggesting they are looking for a sort of credit score for civic participation, and at the denial rates for claims on Obamacare plans, health insurance policies which US residents are forced to purchase but not necessarily able to use.

Read more »
Posted by Angelo Agathangelou at 4:47 pm No comments:

SyrianGirl discusses
US congress persons forced to sign a pledge of allegiance to Jewish apartheid Israel regime.
Posted by Angelo Agathangelou at 12:13 pm No comments:

Why Is Corbyn So Important?

'Trump has succeeded in illuminating the hopeless state of the democratic adventure. ...Similarly, Corbyn acts as a catalyst
to awaken a new consciousness.
...Corbyn’s struggles allow us to see that the Labour party is an occupied zone.' 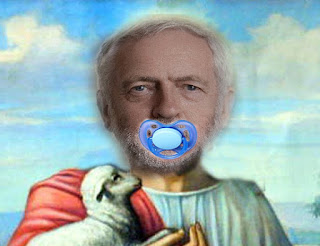 By ex-Jew Gilad Atzmon: For the same reasons that President Trump has been a significant political development.
These two post-political characters bring to the surface what has been suppressed for decades: we are subject to foreign occupation. We the people, are reduced to mere consumers and our so-called ‘elected politicians’ are a bunch of detached, compromised actors.
'It is through Corbyn and his to date colossal failure that we understand that a fresh form of opposition is crucial for our survival as ethical and dignified people.'

Read more »
Posted by Angelo Agathangelou at 10:46 am No comments:

In Israel, two Semitic Palestinian political parties and one Jewish member of a mostly Palestinian party have been banned from running in the April 9th election; meanwhile a radical Jewish candidate stays in, both after the Attorney General recommended the exact opposite.

By Kathryn Shihadah: The Washington Post reported that Israel’s electoral committee has decided to ban two Palestinian parties and one liberal Jewish, pro-Palestinian rights candidate from running in next month’s elections.
At the same time, the committee retained an extreme right-wing candidate, in spite of a recommendation from Israel’s Attorney General to bar him.
The Palestinian parties, Ra’am (United Arab List) and Balad, and Jewish candidate Ofer Cassif, who was running on the mostly Palestinian Hadash-Ta’al ticket, were removed based on petitions from right-wing factions, including Likud, the party of Prime Minister Benjamin Netanyahu – petitions which the Israeli Attorney General had rejected. 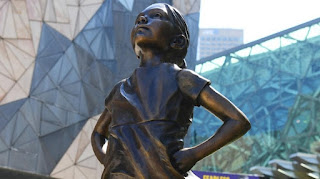 By Mark Dent: Fearless Girl has been unveiled in Melbourne. She stands proudly, defiantly in Federation Square.
She is a symbol of the fight for gender equality. She is the visible cry for wage equity, girl power, female empowerment and a tribute to the undervalued and often unrecognized courage and sheer perfection of the female species.
I don’t know if this shit avalanche is ever going to abate. I keep waiting, hoping that the worst is behind us and that the blatant lies and inherent bigotry spouted by feminists will eventually come back to haunt them and ultimately lead to the demise of this damaging ideology.
Nope.
There she stands- a defiant little piece of work with a look I have become familiar with in recent years. It seems to say, “I’m a girl, do you have a problem with that?”
The statue encapsulates the unbounded sense of entitlement and pure arrogance of those who have been force fed the feminist agenda.
I think of the endless attacks on masculinity and young boys in our media and in our education system. If any gender was crying out for a symbol to remind them that they are brave and smart and filled with untold potential it is our young boys.

Comedian Gets Visited By US Homeland Security For Tweet

Jimmy Dore with Jake Flores
Posted by Angelo Agathangelou at 12:46 am No comments: