'We can conclude that the fact that such filth as Mueller, Brennan, Comey, Rosenstein, and Clapper were at the top of US intelligence and criminal investigation is conclusive proof that the US government is a criminal organization.'

By Dr. Paul Craig Roberts: What can we conclude from the utter and total failure of the Russiagate “investigation” to find any evidence of “Russian collusion”?
We can conclude that it was a hoax cooked up by an utterly corrupt and immoral military/security complex determined to protect its $1,000 billion annual budget and the power that goes with it from the loss of its Russian enemy to normalized relations.
We can conclude that Hillary’s DNC was partner to this crime and that scum like Jarrold Nadler and Adam Schiff have destroyed the reputation and credibility of the Democratic Party.
We can conclude that the US media is devoid of all integrity, morality, and truthfulness and has forever discredited itself as a source of objective and accurate information.
We can conclude that a corrupt military/security complex and Democratic Party were so determined to serve their own narrow self-interests that they were willing to subject the entirety of the world to a higher risk of nuclear war.

"Jeepers Creepers I feel a flashback coming on!"
Said Ex-Jew Nathanael
Posted by Angelo Agathangelou at 8:28 pm No comments:

Posted by Angelo Agathangelou at 5:21 pm No comments:

George Galloway: The terrorist attack on two mosques in New Zealand stunned the country. Brenton Tarrant, the man charged in relation to the massacre in which 50 people were killed, has appeared Christchurch District Court. New Zealand's deputy prime minister says Tarrant will spend the rest of his life in isolation in prison and called for solidarity to eradicate "hate-filled ideologies".
Posted by Angelo Agathangelou at 11:35 am No comments:

"Everyone has to pretend
Rachel Maddow's funny."
Said Jimmy Dore.

Read more »
Posted by Angelo Agathangelou at 7:57 am No comments:

'The only irony remaining is that the only person to yet apologize to Filler is Judge Woodcock, a man who’s never wronged him. ...He stands as a beacon of hope to every innocent person who must confront and fight judicial systems that sometimes seem Kafkaesque.' 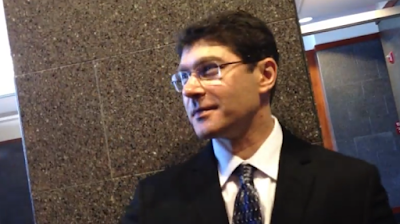 By Robert Franklin: Call it Everyman’s “Shawshank Redemption.”  Vladek Filler has won again (Bangor Daily News, 3/16/19).  His victory is now complete.  On March 12, federal Judge John Woodcock issued his ruling awarding Filler $1.77 million in damages for his illegal and immoral persecution by various authorities of the cities of Gouldsboro and Ellsworth, and Hancock and Washington counties.  (The award is against a single person, Linda Gleason.  Filler previously settled out of court with other defendants.)  Perhaps more important than that award though was this statement in open court by Judge Woodcock:


And this is really, from a judicial perspective, it’s just appalling. I can’t say how sorry I am to you that you had such a terrible experience with the criminal justice system in this country and in this state. There’s no excuse for what happened to you.

Read more »
Posted by Angelo Agathangelou at 4:28 am No comments:

By Author Douglas Galbi: With loving concern, fathers bravely counsel their sons about women. Peter Abelard, the husband of the great twelfth-century woman philosopher and religious leader Heloise of the Paraclete, wrote a long and frank poem of advice to their son Astralabe. Yet the life of the wealthy, first-century Roman merchant and estate owner Gaius Pompeius Trimalchio Maecenatianus shows difficulties in implementing Abelard’s advice to his son Astralabe.
Abelard warned Astralabe about marrying a wealthy woman. Marrying a wealthy woman is typically advantageous to a man. A husband’s oppressive gender burden of working to earn money for his wife and children typically becomes less weighty if the husband has a wealthy wife.

Read more »
Posted by Angelo Agathangelou at 1:09 am No comments: