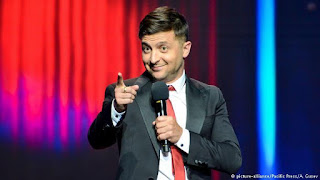 Anti-establishment comedian who played accidental president on TV could lead the country after April run-off...
By Tyler Durden: A popular comedian seen as "soft" on Russia and who said he would actually sit down with Vladimir Putin to talk peace looks to upset Ukrainian politics, as he's significantly leading in exit polls during Sunday's presidential elections in Ukraine.
Volodymyr Zelenskiy, who incidentally played the president on TV as part of his comedy career has according to exit polls cited by the BBC received 30.4% of the vote, with current president Petro Poroshenko second with 17.8%.
"I'm very happy but this is not the final result," Zelenskiy told the BBC moments after after the exit polls were announced, while incumbent Poroshenko, who has led Ukraine since the February 2014 Maidan conflict that toppled former pro-Russian President Viktor Yanukovych, described the forecast of his defeat as a "harsh lesson".

"It's all about the Benjamins!"
Matt Orfalea: How Much Money Israel Lobby Gave Politicians Attacking Ilhan Omar? I got kind of obsessive and looked up exactly how much $ each politician attacking Omar's comments about the Israel lobby has received from pro-Israel sources. Thanks for watching!
Posted by Angelo Agathangelou at 7:08 pm No comments: Links to this post

Listen To The Melody

American Soldiers Aren't Dying For Our Freedom In Syria, Iraq And Afghanistan - They're Dying For Nothing

No mother wants to think that her child died in vain. But, as two more Americans die in Afghanistan this week, we need to face the truth.

By Jerrod A Laber: President Trump has promised repeatedly to end “endless wars,” during both his campaign and his tenure so far in office. Despite this rhetoric, endless — and, frankly, pointless —wars are, sadly, still the American norm.
Two more Americans were just killed in Afghanistan — a war that the Trump administration realises needs to end, but seems in no hurry to actually do so. In December 2018, Trump announced that all US troops would be withdrawn from Syria, only to later rescind that declaration in favour of a small force of 400 to 1,000 troops to stay behind indefinitely, complementing the more than 5,000 troops in Iraq, who are there to satiate the administration’s obsession with Iran.
Soldiers who were children when the Afghanistan war began are dying. It’s well past time to bring all of our troops from Afghanistan, Syria, and Iraq home.

Read more »
Posted by Angelo Agathangelou at 1:05 pm No comments: Links to this post

By Dr. Paul Craig Roberts: It is amazing the power that politically correct kooks have acquired over language, art, and literature. It is a sign that the West is culturally dead.
When high museums rename paintings because some emotional weakling declares the name to be offensive, it becomes obvious that the custodians of Western culture have lost their belief in Western culture.
When universities cover up murials because of a claim they are offensive to people whose presence on the campus is miniscule if present at all, you know that learning is no longer the purpose of the university.
When a people are afraid to use the words and terms of their forefathers, you know they have been intimidated to abandon even their own language and ways of speaking.
Western culture today consists of pornography, sexual deviants, whinning whimps devestated by mere words, self-hatred, and craven cowards afraid to stand up for themselves against the onslaught of hate directed toward them by political correctness freaks.

Read more »
Posted by Angelo Agathangelou at 11:29 am No comments: Links to this post

The Deification Of Females 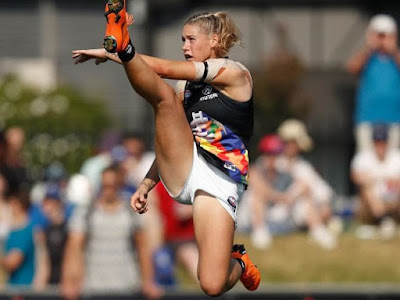 By Mark Dent: The deification of women has never been more evident in our society after a recent uproar over a photo of a female footballer was published online here in Melbourne, Australia. ...The photo featured a young woman, Tayla Harris, frozen in action as she kicked a goal during a clash in the AFWL.
A few trolls online made sexually explicit comments about her open legs and pose. ...These comments led to an explosion of outrage rarely seen even in this radically left leaning, feminist society. It was nauseating to be hearing or reading about this issue on a daily basis with no-one, other than a handful of male ex footballers quietly muttering that they too were exposed to endless denigration of their appearance, their ability and even death threats, without so much as a ripple of reaction from the media.

Read more »
Posted by Angelo Agathangelou at 3:37 am No comments: Links to this post