Mark Of The Beast: "We're Living In An Anti-Christ World"

"Sensitivity training you know installs a police station in your brain. ...Today's beast, it's mark is also invisible. Not a chip yet in a mandatory vax, nor a bar code encrypted on your brow, but the creeping colonisation of the West Bank of the mind, a vaporous gag thrust in your mouth. ...666." Said ex-Jew Nathanael.
Posted by Angelo Agathangelou at 8:31 pm No comments: Links to this post

'The Israeli army, drive front end loaders onto Palestinian farms, scrape up the top soil, load it onto dump trucks, and drive it back to Jewish farms.'
***
Part 8 of a 12 part series examining the ecological impacts
of Israel’s occupation of Palestine.
By Dick Callahan:

“It was not as if there was a Palestinian people in Palestine and we came and threw them out and took their country away from them. They did not exist.” Former Israeli Prime Minister Golda Meir.
““The mountainsides were cut in terraces, many of them but a few yards wide, bearing olive, fig, and apricot trees, and numerous extensive vineyards…The whole face of the country, since leaving Jerusalem, bore evidence of a high state of cultivation…immense fields of ripened grain, the thick clustering stems bending to the breeze, their golden surfaces chequered with the shadows of passing clouds. Behind us were the rugged mountains, before us the lovely plain dotted with villages, and covered with a whole population gathering the harvest… Long before sunrise, the next day, the industrious fellahin [Palestinians] were at work in the fields.” W.F. Lynch, Commander US Navy Jordan River and Dead Sea expedition, March, 1848.

Read more »
Posted by Angelo Agathangelou at 5:46 pm No comments: Links to this post

'The hand of democracy
squeezing the throat of freedom'. 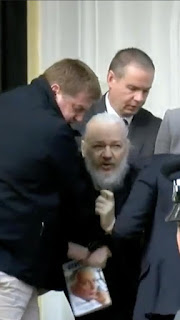 
The indictment alleges that in March 2010, Assange engaged in a conspiracy with Chelsea Manning,

Read more »
Posted by Angelo Agathangelou at 2:41 pm No comments: Links to this post 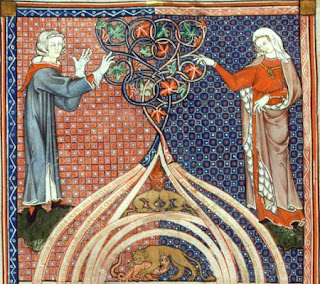 By Author Douglas Galbi: Scholars in twelfth-century Bologna recovered for western Europe the Corpus Juris Civilis. That’s the body of Roman law systematically compiled under the sixth-century Roman Emperor Justinian. Study of the Corpus Juris Civilis in medieval Bologna established the field of jurisprudence — “the practical science of giving wise interpretation to the laws and making a just application of them to all cases.”[1] In the shadow of Corpus Juris Civilis and jurisprudence was medieval love literature addressing the problem of a wife with a long-absent husband.  Working at the heart of Roman law’s revival at the University of Bologna early in the thirteenth century, the brilliantly transgressive scholar Boncompagno recognized that law and jurisprudence are a poor substitute for heartfelt love. Marriage has long been a matter of legal concern. Marriage under Roman law was an extensively elaborated contractual arrangement that required the consent of both parties. 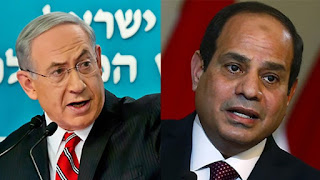 Israeli PM Benjamin Netanyahu, Egyptian President Abel Fattah Al-Sisi
By Whitney Webb: Brigadier General Aryeh Eldad of the Israel Defense Forces (IDF) has claimed that Israel was behind the 2013 military coup that ousted Mohammed Morsi, Egypt’s first democratically elected president. Eldad made the claim in an article published in the Israeli newspaper Maariv.
In the article, Eldad asserted: The outbreak of the January revolution coincided with the Israeli security assessment that President-elect Mohamed Morsi, a Muslim Brotherhood man, intended to cancel the peace agreement with Israel and send more Egyptian military forces to the Sinai Peninsula.”

Computing Forever
Read more »
Posted by Angelo Agathangelou at 8:29 am No comments: Links to this post 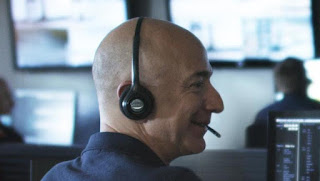 By Tyler Durden: Amazon employs thousands of people to listen in on what people around the world are saying to their Alexa digital assistant, according to what is sure to be a Congressional hearing-inspiring report by Bloomberg, which cites seven people who have worked on the program.
While their job is to "help improve" NSAlexa - which powers the company's line of Echo speakers - the team "listens to voice recordings captured in Echo owners’ homes and offices," which are then transcribed, annotated and fed back into the software in order to try and improve Alexa's understanding of human speech for more successful interactions. In other words, humans are effectively helping to train Amazon's algorithm.


In marketing materials Amazon says Alexa “lives in the cloud and is always getting smarter.” But like many software tools built to learn from experience, humans are doing some of the teaching. -Bloomberg

Read more »
Posted by Angelo Agathangelou at 5:16 am No comments: Links to this post

"She doesn't take corporate money. ...She's seen the price that people have to pay for war, first hand. She's in the military, so when she says something about our wars that is counter to The Pentagon, it lands with people. ...She's not just some lefty hippie screaming." Said Jimmy Dore.
Posted by Angelo Agathangelou at 2:52 am No comments: Links to this post

Feminist Neurotic And Dishonest Pseudo-Intellectuals Have Infested Academia, The Media And The Medical Profession 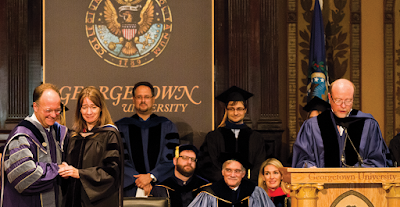 By James Howard Kunstler: How might we account for the strange melding of neuroticism and dishonesty that has gripped America’s thinking class since the ascent of Donald Trump as an epically reviled figurehead on our ship of state? It all seems to come down to shame and failure.
There is, for instance, the failure of America’s leading economic viziers to arrest the collapse of the middle class — and with it, the disintegration of families — that more than anything produced the 2016 election result. What is a bigger emergency: the destruction of all those towns, cities, and lives in flyover-land, or the S & P stock index going down twenty points?
The choice made by the “experts” the past ten years is obvious: pump the financial markets at all costs by using dishonest policy interventions which they are smart enough to know will eventually blow up the banking system.