By MRA-UK: If you are not actually living in a black hole yourself, and hence out of contact with the rest of the universe, you will know by now that astronomers have just reported the first picture of a black hole, specifically the supermassive black hole at the center of galaxy Messier 87. (To be pedantic, it’s the first picture of stuff falling into a black hole, the black hole itself being, well, black. Actually, it isn’t, quite, but never mind).
One is used to experts interviewed on the BBC about anything scientific (well, anything at all really) being women on every occasion it proves possible. This was no exception, local women astronomers being pressed into service yesterday to comment on the achievement. Annoyingly obvious propaganda. One groans and moves on. But press articles have appeared such as the BBC’s “Katie Bouman: The woman behind the first black hole image” and the Mail’s ‘An amazing accomplishment… take your seat in history’: Ivanka Trump and AOC lead the plaudits for humble MIT graduate, 29, who created the algorithm that captured the first EVER direct image of a black hole’.
A whole bunch a female celebs (not noted for knowing anything about science, and caring less) flooded social media to “claim the black hole for woman-kind”.

The Fraud Of Feminism

By Mark Dent: There is a quote from one of the characters in the play/film, The History Boys, which touched me deeply:


“The best moments in reading are when you come across something – a thought, a feeling, a way of looking at things – that you’d thought special, particular to you. And here it is, set down by someone else, a person you’ve never met, maybe even someone long dead. And it’s as if a hand has come out and taken yours.”

I had the pleasure of rediscovering that special feeling so beautifully expressed in the quote above when I began reading The Fraud of Feminism by E. Belfort Bax. The book was written in 1913.
His commentary and insights into feminism are astonishingly fresh and as relevant and applicable today as they were more than one hundred years ago.
It was a remarkable experience to read a passage relating to what today would be labelled “virtue signaling” and to see that the very same behavior was occurring in 1913 (and long before) for the very same reasons as it exists today. 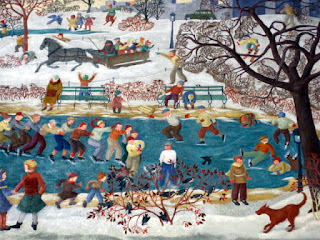 Historic WPA mural featuring only white children removed from Oak Park school "Child and Sports–Winter," a WPA mural removed from a cafeteria at Percy Julian Middle School. Barbara Bernstein/New Deal Art Registry
By Manny Ramos: A Depression-era mural depicting white children playing outside in the winter was removed from Percy Julian Middle School in Oak Park because school officials said it failed to represent the school’s diversity.
While some said the mural was upsetting to students of color who felt it excluded them from the school, a local historian likened the removal to a “modern-day book burning.”
Julian Principal Todd Fitzgerald announced the weekend removal in an email sent to school staff Monday.

Read more »
Posted by Angelo Agathangelou at 12:37 pm No comments: Links to this post

thejuicemedia: The British, Australian, Ecuadorian and US Governments have made an ad about Julian Assange’s arrest and it’s surprisingly honest and informative!
Posted by Angelo Agathangelou at 12:01 am No comments: Links to this post