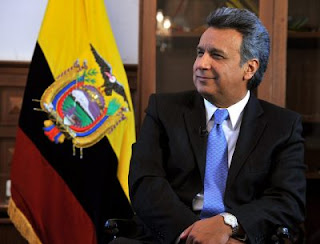 Former Ecuadorian President Rafael Correa and Moreno are world’s apart.
By Stephen Lendman: Correa expelled the Pentagon from his country, shutting down its Manta airbase, the region’s largest. Moreno invited what no country should tolerate on its territory to return.
Economist President Correa opposed IMF debt bondage. Moreno went the other way. Correa opposed privatization of oil, gas, water, electricity, and other government enterprises, what Moreno wants handed to corporate predators, most likely for self-enrichment.
Correa’s agenda included investing in public healthcare, education, and other social programs. Moreno believes anything government can do, business does better so let it, no matter how exploitive of and harmful to ordinary people.
According to Bolivarian Alliance for the Peoples of Our America (ALBA) Solidarity Committee member Stansfield Smith, Ecuador for a decade under Correa was “transformation(al).”
His predecessors (and Moreno) “instituted neoliberal austerity and privatization programs, prompting inequality, poverty and unemployment to soar.”

Read more »
Posted by Angelo Agathangelou at 10:08 pm No comments: Links to this post 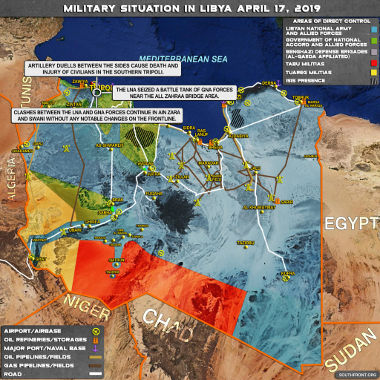 By Moon of Alabama: The situation on the ground in Libya has changed little since we last looked at it two weeks ago.
The Libyan National Army (LNA) troops of General Hafter attack the militias which support the UN recognized government in Tripoli from the south. The LNA still lacks forces for a larger break through. Several objects at the front changed hands several times. There are bloody skirmishes but no big fights. Those are still to come.


Map by South Front - bigger
Some people doubt that Hafter can be successful:


Analysts believe that Haftar over-estimates the strength of his LNA. They say the controversial field marshal, who backs an administration rival to the GNA based in eastern Libya, was counting on a quick collapse of Tripoli militias.
But pro-GNA reinforcements from around Tripoli rushed to assist in driving back his forces.

Wikileaks publisher Julian Assange is incarcerated in a UK prison that has been called “Britain’s Guantanamo.” His crime was exposing actions the US government, the media, the Democratic–Clinton machine, Israel, and others wanted kept hidden, including war crimes and torture. 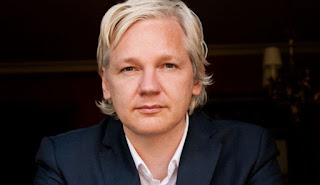 Julian Assange, founder
and editor-in-chief of Wikileaks.
By Alison Weir: Wikileaks publisher Julian Assange has finally been imprisoned, an objective long sought by powerful parties he helped to expose over the past dozen years.
Assange’s “crime” was revealing deep, embarrassing, sometimes deadly, malfeasance by numerous actors, including the U.S. government, the media, the Democratic Party-Clinton machine, and Israel.
Read more »
Posted by Angelo Agathangelou at 4:17 pm No comments: Links to this post

Prospect Of Nuclear War Highest In Decades, Yet Our Lame Stream Media Ignores

Read more »
Posted by Angelo Agathangelou at 1:27 pm No comments: Links to this post

The Era Of Robotic Firefighting Is Upon Us...

Meet Colossus: The Robot That Saved
Firefighter Lives At The Notre Dame Inferno 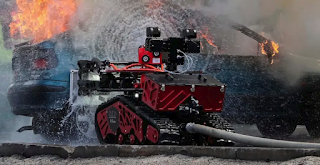 By Tyler Durden: A robot named "Colossus" played a key role in helping save the lives of firefighters at the recent Notre Dame blaze, according to The Independent. When the commander of the Paris fire brigade told his firefighters to retreat because the building's temperatures had grown too high, he instead enlisted the help of a 1,100 pound tank-like robot with the ability to venture into places and conditions that would quickly kill a human being.
The robot utilizes a water cannon capable of firing more than 660 gallons per minute, which it sprayed at the walls of the cathedral in the midst of the blaze.
Gabriel Plus, a spokesman for the Paris fire brigade said: “Time was against us, the wind was against us and we had to get the upper hand. The priority we set was to save the two belfries. Imagine if the timber of the belfries had been weakened and the bells had collapsed. That was really our fear. In the beginning, it was not impossible to imagine that the cathedral structure could collapse.” 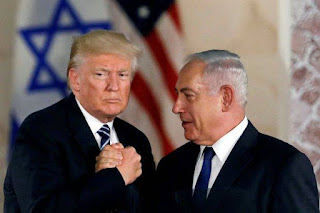 '“Evil is good”, at least when Israel does it.'
LD:  Admire Trump as much as you want, but at least have the honesty to admit  that the man is a Zionist stooge who loves Israel, like most American Jews, more than he loves America. Having moved the American embassy to Jerusalem and decided that the Golan Heights, contrary to international law, should be ceded to Israel, Trump now goes one step further in stating that Israel should be exempt from the judgments of the International Criminal Court. In other words, Israel must not be held responsible for its war crimes. It needs to be “aggressive” for its own good and is therefore beyond international law. Give Trump a chance and he will soon be telling us that “Evil is good”, at least when Israel does it.

“Israel is very special to me. A special country, a special people. We are very much in favor of what Israel does. They are aggressive and they have no choice but to be aggressive. Bibi, my friend .  . . we are with Israel 100 per cent” - Quote from video below