Reuters Is A Disinformation Agency For Warmongers 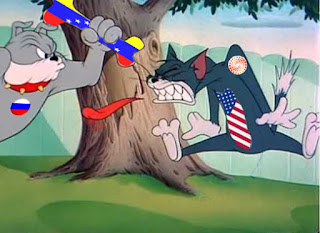 By John Helmer: The Reuters news agency has published a retraction of an “exclusive” report on operations between the Venezuelan and Russian state oil companies, PDVSA and Rosneft, after disavowing the US-supplied source. Reuters has also acted after Rosneft applied for a criminal investigation of the media company’s operations in Russia by Moscow prosecutors.
The acknowledgment of misreporting has exposed evidence that Reuters’ reporters and bureaux in Caracas, Venezuela, Mexico City, Houston, London and Washington are routinely relaying disinformation supplied by US Government agents in their attempt to damage Venezuelan, Russian, Indian and Chinese operations in the international oil market.
According to a publication by Reuters issued on Tuesday, April 23 –  but made to appear to have been published on April 18 – the news agency has admitted it “could not determine” its earlier allegation that a “scheme uncovered by Reuters” was true.

Read more »
Posted by Angelo Agathangelou at 11:04 pm No comments:
Email ThisBlogThis!Share to TwitterShare to FacebookShare to Pinterest

Bonobo3D: Nickoté Rinaldi joined the Bloodstained Men & Their Friends tour of the Gulf States. On the streets of Destin Florida he explains his passion for protecting human rights, and ending sexual mutilation of children.

Read more »
Posted by Angelo Agathangelou at 8:23 pm No comments:
Email ThisBlogThis!Share to TwitterShare to FacebookShare to Pinterest

Max and Stacy discuss the IMF tweeting out a link to their old scare piece about extremely negative interest rates applied to savings accounts. They then look at the data showing German citizens have been stacking gold, tons of it. In the second half, Max interviews Sergej Kotliar, the CEO of Bitrefill.com, about the latest news in bitcoin adoption and the spread of the Lightning Network.

Read more »
Posted by Angelo Agathangelou at 5:26 pm No comments:
Email ThisBlogThis!Share to TwitterShare to FacebookShare to Pinterest

Stabbed In The Heart ...By The Zio-Fascist Jews 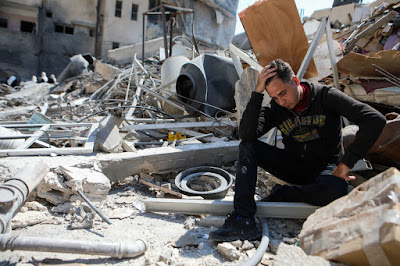 By Amjad Ayman Yaghi: Walid al-Shawa dreamed of a bright future when he was younger. Yet adult life has been cruel despite years of planning.
Walid al-Shawa sits atop the rubble of his former home in the Jewish Israel Regime's Gaza concentration camp. Mohammed Al-Hajjar
Starting as a child, Walid spent 10 years moving from one job to another. A permanent job was beyond reach in his besieged Gaza concentration camp community, which suffered the closure of industrial and commercial institutions.
His future became decidedly more bleak when Jewish Israeli death forces IDF destroyed his home in March – just three weeks before he was due to get married.
On 25 March, he was spending a pleasant evening with his fiancée, Naela al-Jalis, in her house in the al-Shujaiyeh neighborhood of Gaza Concentration Camp Mega City. As they prepared to sit down to eat, his mother called, spoiling the moment.

Read more »
Posted by Angelo Agathangelou at 8:10 am No comments:
Email ThisBlogThis!Share to TwitterShare to FacebookShare to Pinterest

The Last American Vagabond
Posted by Angelo Agathangelou at 5:56 am No comments:
Email ThisBlogThis!Share to TwitterShare to FacebookShare to Pinterest

Deek Jackson
Posted by Angelo Agathangelou at 3:34 am No comments:
Email ThisBlogThis!Share to TwitterShare to FacebookShare to Pinterest 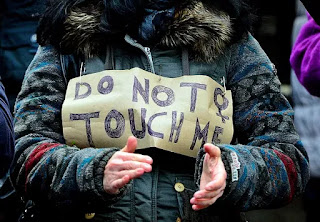 By Andrew Tettenborn: Rape is a vile and sordid crime, and the details more sordid still (if you feel squeamish don’t read further). But this hasn’t stopped well-meaning progressives in Scotland, in their desperate quest for politically-correct feminist orthodoxy, from making fools of themselves and – courtesy of a decision of the Scottish Appeal Court produced last year but only reported a few days ago – rapists of a sizeable proportion of Scotsmen.


Let me explain. In 2009 the oh-so-woke SNP Scottish government decided on an up-to-date definition of rape, free from the encrusted detritus of the patriarchy. Having done this, they put it into the Sexual Offences (Scotland) Act 2009. It can best be summed up as “if in doubt it’s rape.”


Putting matters as delicately as possible, the new law says rape is penetration, so long as it continues, to which there is no free consent or reasonable belief on free consent. It then says that as a matter of law consent cannot be given by a person who is drunk, incapable or asleep, and can be withdrawn at any time; and that consent to one act does not mean consent to anything else.