Writer reveals how his bipolar partner throttled him and set fire to their home – yet HE was jailed for hitting her in self-defense, ...because vagina. 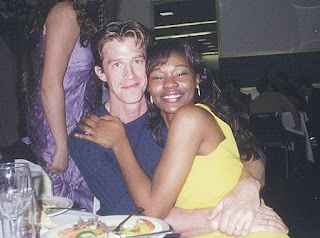 By Annabel Grossman: The second time Matt Fitzgerald’s wife tried to kill him, he was convinced that she was going to succeed.
Charging at her husband with a seven-inch kitchen knife, before clawing at his face and lashing him with a studded belt, Nataki screamed: ‘Nobody's going to save you this time. You're all alone.'
After suffering two painful swipes from the belt, a shoeless Matt escaped their home in his car, only to be pursued by his wife who threw herself on the roof of the vehicle screaming insults and curses.
During the attack - one of several that occurred throughout their marriage - Nataki was in the grip of a devastating mental illness that sent her into a downward spiral of paranoia and psychosis.
Read more »
Posted by Angelo Agathangelou at 11:21 pm No comments: Links to this post

Max and Stacy discuss the big losses at ‘blitzscaling’ unicorns of Silicon Valley where size matters as the race to go public hots up. And while Silicon Valley tech unicorns posted combined cumulative losses of $47bn, in the energy patch — frackers lost a relatively meager $6.69 billion in 2018. In the second half, Max continues his interview with Tyson Slocum of Public Citizen's energy program about coal, renewables, fracking, and California electric story.
Posted by Angelo Agathangelou at 11:13 pm No comments: Links to this post

Rabbis Proudly Declare Jewish Israel To Be A Racist State

Read more »
Posted by Angelo Agathangelou at 1:38 pm No comments: Links to this post

Zionist Jewish Racists Have Vandalized 53 Churches And Mosques Since 2009, Only 9 Indictments Filed

Anti-Christian slogans written in Hebrew.
...The number of mosques and churches attacked in Israel is high, but Zionist police effort at investigating these racist crimes are absurdly low. 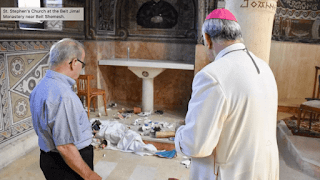 
By Yotam Berger and Nir Hassom: Over 50 Christian and Muslim sites have been vandalized in Israel and the West Bank since 2009, but only nine indictments have been filed and only seven convictions handed down, according to Public Security Ministry data. Moreover, only eight of the 53 cases are still under investigation, with the other 45 all closed.


The ministry data only goes through July 2017, but the vandalism hasn’t ended.


The latest attack occurred last Wednesday, at St. Stephen’s Church in the Beit Jamal Monastery, near Beit Shemesh. Many items were broken, including some of the stained glass windows and a statue of the Virgin Mary.
Read more »
Posted by Angelo Agathangelou at 1:23 pm No comments: Links to this post