What I Saw In Gaza Concentration Camp Changed Me Forever

'My true liberation as a Jewish person is bound up with the liberation of Palestinian people.' 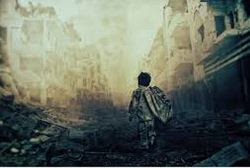 By Ned Rosch: The great Indian writer Arundhati Roy wrote, “The trouble is that once you see it, you can’t unsee it. And once you’ve seen it, keeping quiet, saying nothing, becomes as political an act as speaking out. There’s no innocence. Either way, you’re accountable.” There were numerous times in my life when I “saw” it and felt the strongly reinforced foundations of my Zionist upbringing eventually crack wide open and ultimately turn to dust, but perhaps nothing more deeply touched me and cemented my perspective than a trip to Gaza in November 2014.


For a brief but remarkable week and a half, I had the amazing privilege of being part of a health delegation to this small strip of historic Palestine that is one of the most crowded places on earth because its population is literally sealed in by the Israelis—with the assistance of the Egyptians.

Read more »
Posted by Angelo Agathangelou at 10:28 pm No comments: Links to this post

'Identity politics racks up another victim.
This time it’s women.' 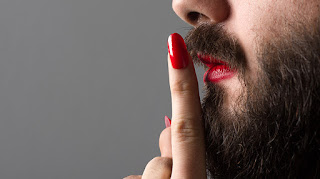 By Philip Carl Salzman: Second wave feminism began in the 1960s as “The Women’s Movement,” coincident with the arrival of a new technology for the auto-control of fertility, the birth control pill,[1] invented by male scientists. But the standard feminist narrative argues that gender is defined entirely independent of biology; gender, feminists argue, is not the result of genetics and physiology, but totally a result of “social construction.”[2] In other words, the feminist narrative states that male and female roles, abilities, and preferences are not significantly determined by biology, but are defined by social norms, and that individual males and females are shaped into what they are by means of socialization, social pressure, and law.
It is understandable that female liberationists would argue against the influence of nature and side entirely with the influence of nurture, because in the past restrictions on females were often justified in terms of the alleged biological inferiority of females in relation to males: for example, that females were physically weak and males strong, and so females had to be protected by males; that females were emotional and males were rational, so education and public business had to be left to males; and so on.

Beyond Meat, Beyond Crazy

Max and Stacy discuss the Beyond Meat IPO being beyond crazy as losses, while not as great as Uber’s, show dotcom levels of bubble hysteria are back. They also look at the interest being paid on excess reserves now adding up to $36 billion per year in taxpayer subsidies to banks - ie, straight up welfare. In the second half, Max continues his interview with Peter Schiff about the #DropGold campaign, the cost of moving bitcoin versus the cost of moving gold and take some viewer questions about at what price Schiff will concede defeat. They also discuss fellow bitcoin hater, Warren Buffett’s love for stock buybacks and whether or not that money would be better off returned to shareholders rather than to executives.
Posted by Angelo Agathangelou at 4:36 pm No comments: Links to this post

Christine Ford And The Mifepristone Industry 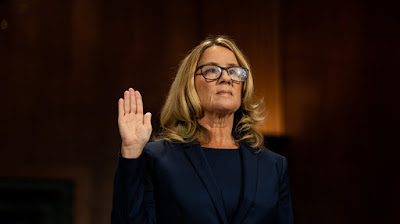 By John Doe: Prologue. I had no reason to sympathize with either Ford or Kavanaugh before the Congressional hearings. I listened to Ford’s testimony with an open mind, partially based on my naïve belief that a respectable professor would not presume to lie to the Congress in cold blood. However, Ford’s testimony became less and less credible as she kept talking – finally reaching a pitch of absurdity (as absurd as her facetious intonation) that made me question why a scientist would try to concoct such a clownish, unbelievable story.
As an additional disclaimer, let me note that I am an irreligious person. I do think abortion must be legal at least in some circumstances. I have no formal or informal ties to either Ford or Kavanaugh, nor any person/group affiliated with either person. I have an advanced degree in molecular biology and I know the world of bioscience quite well.
Question: Did Christine Ford have an improper political/financial agenda in coming forward with accusations against Brett Kavanaugh?

"We fucked the plannet, now we're fucked, just get over it." Said Deek Jackson.
Posted by Angelo Agathangelou at 12:33 am No comments: Links to this post