Why Farage Wins The Country And Corbyn Wins Only A Party 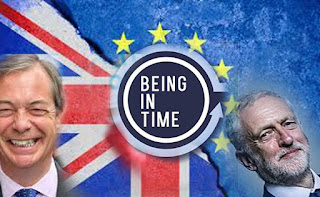 By ex-Jew Gilad Atzmon: Nigel Farage, Britain’s Donald Trump character, is by far the most significant man in British politics. In just a few weeks he has gathered huge political momentum. In tomorrow’s European Parliament elections he appears likely to score more votes than Labour and the Conservatives combined. Farage stood up against the entire political establishment, including the media and the commercial elites and has promised to change British politics once and for all. So far, it seems he is winning  on all fronts.
How it is that once again a Right wing populist has won the minds and hearts of working people? How is it possible that Jeremy Corbyn, who was perceived by many of us as the greatest hope in Western politics, has managed, in less than three years, to make himself an irrelevant passing phase?  How is it possible that the Right consistently wins when the conditions exist for a textbook socialist revolution?

'For ethics, equality and tolerance to prevail,
we need a profound study of the human spirit
not lame discussions of dialectical materialism.'
Read more »
Posted by Angelo Agathangelou at 5:13 pm No comments:

By Dr. Paul Craig Roberts: Everyone who is aware of the US government’s extraordinary criminal actions at home and abroad bears a heavy weight.  The millions of peoples murdered, maimed, orphaned, widowed, and displaced by gratuitous American military aggression comprise a Holocaust of deaths based entirely on lies and false accusations in order to advance secret American and Israeli agendas. I suspect that the heavy burden of responsibility for mass murder and destruction committed in our name is the reason most Americans prefer the fake news fed to them about how good and wonderful and exceptional we are and how hard our government works to protect us from the nasty folks elsewhere.  This storyline converts the illegal brutal war crimes of the US government against women, children, defenseless citizens, schools, wedding parties, funerals, and farmers in their fields into glorious and brave defenses of our liberty and virtue. If you want the truth watch the video leaked by Manning of US troops enjoying themselves while from the air they machine-gun reporters and innocent civilians walking along a street and follow up by machine-gunning a father and his two young children, babies, who stopped to help the wounded bleeding in the street.  The leak of the video that showed the true picture of Washington’s wars is the reason Manning was tortured and imprisoned.  It is the person who told the truth, not the criminals who committed the murders, who was punished.

Read more »
Posted by Angelo Agathangelou at 9:31 am No comments: