Tide Of Public Opinion Is Turning In Assange's Favor 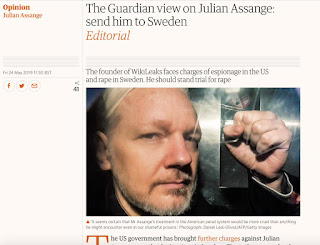 Authored by Joe Lauria: The indictment of Julian Assange under the Espionage Act has profoundly affected press coverage of the WikiLeaks founder, with much of the media turning suddenly and decisively in his favor after  years of vilifying him.
The sharp change has also come from some politicians, and significantly, from two Justice Department prosecutors who went public to express their dissent about using the Espionage Act to indict Assange.
To the extent that public opinion matters, the sea-change in coverage could have an effect on the British or Swedish governments’ decision to extradite Assange to the United States to face the charges.


Used to Be a Russian Agent

Since the 2016 U.S. presidential election establishment media, fueled by the Mueller probe, has essentially branded Assange a Russian agent who worked to undermine American democracy.

Read more »
Posted by Angelo Agathangelou at 10:39 pm No comments: Links to this post

Can Prostitutes Consent To Sex?

The C.O.C.K. Fairy: While Canada's Supreme Court sends an acquitted man back to trial the decision raises questions about whether or not prostitutes can consent to sex. Who says the law is boring?

Cost Of Serving The Elite Who Rule The Dumbshit Americans 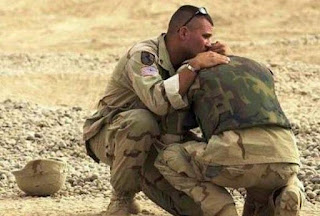 Army Virtue-Tweet Backfires: 1000s Expose "Heartbreaking" Horrors Of Never Ending Zionist And Corporatist Wars
Authored by Caitlin Johnstone: After posting a video of a young recruit talking to the camera about how service allows him to better himself “as a man and a warrior”, the US Army tweeted, “How has serving impacted you?”
As of this writing, the post has over 9,600 responses. Most of them are heartbreaking.


“My daughter was raped while in the army,” said one responder. “They took her to the hospital where an all male staff tried to convince her to give the guy a break because it would ruin his life. She persisted. Wouldn’t back down. Did a tour in Iraq. Now suffers from PTSD.”
“I’ve had the same nightmare almost every night for the past 15 years,”said another.

Tweet after tweet after tweet, people used the opportunity that the Army had inadvertently given them to describe how they or their loved one had been chewed up and spit out by a war machine that never cared about them.

Read more »
Posted by Angelo Agathangelou at 5:11 am No comments: Links to this post

Brexit Is All About Making Jewish Apartheid Israel Greater

'Brexit enthusiasts smelled a rat, they could see that May’s Brexit offering didn’t fit with what they had in mind. But they couldn’t see the full picture since the prominence of Israel in post-Brexit plans was never discussed in the British press.'

By ex-Jew Gilad Atzmon: Britain is in a state of political turmoil. The government and the main opposition party have both lost their way and, together, they have completely lost the trust of the people. In the last few weeks we have witnessed a landslide exodus from both the Tory and Labour parties to the slightly more rational, principled and patriotic alternatives: the truly conservative wandered to the Brexit Party and the remainers, who previously voted Labour, migrated to the more humane Liberal Democrats.
Brits are critically divided over Brexit. It is fair to say that most do not fully grasp what Brexit is anymore. They were deliberately not informed of the political discussion over Brexit and what it would mean for the future. Brits feel betrayed by the political class and in truth, they have been subjected to gross and treacherous treatment by their politicians and media. Brits are not aware of the centrality of Israel and its interests that is at the core of the Brexit debate.