John Bull: Enoch Powell predicted that one day we would learn from our mistake in 1975 and vote to leave the Common Market, which we did in 2016.

Posted by Angelo Agathangelou at 6:37 pm No comments: Links to this post

On 17 May, a 5-year-old child died from cancer in a hospital in Gaza concentration camp. She died with her family around her. But she didn’t know that. 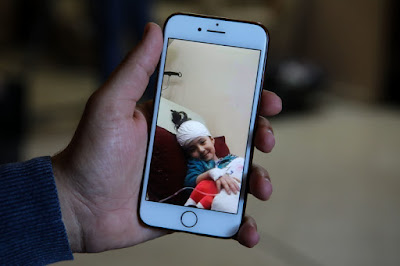 Wissam, Aisha’s father, shows a picture on his phone of his daughter sent him after Aisha’s operation in Jerusalem. Mohammed Al-Hajjar
By Amjad Ayman Yaghi: Reporting from Gaza Concentration Camp - In fact, she had spent most of the past month alone in hospitals in Jerusalem, separated from her parents and other relatives by the Israeli permit system that controls the movement of Palestinians in the world lirgest concentration camps West Bank and Gaza.
Only when treatment failed and she was no longer conscious was she sent back to her family in Gaza.
Aisha Lulu of the Bureij Refugee Concentration Camp in Gaza had been diagnosed with brain cancer in April. She had been having headaches and vomiting attacks since March and doctors found a brain tumor on 7 April. 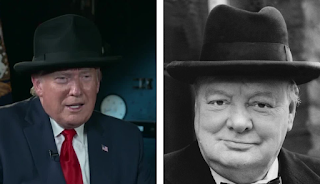 By Tyler Durden: In a wide-ranging interview with Piers Morgan on Good Morning Britain, President Trump said that he's ready to press the nuclear button if and when the time comes.
When asked if he would negotiate with Iranian President Hassan Rouhani to avoid war, Trump said "Of course. I've said that and he's said that. I know so much about nuclear weapons and I see the horrible damage done. I don't want that."

Read more »
Posted by Angelo Agathangelou at 12:44 pm No comments: Links to this post

Gyno-Idolatry And Atomism In Medieval Reception Of De Rerum Natura

You hear these things, and I fear you’ll think yourself
on the road to evil, learning the fundamentals
of blasphemy.
{ Illud in his rebus vereor, ne forte rearis
impia te rationis inire elementa viamque
indugredi sceleris. } [1] 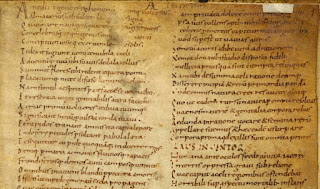 By Author Douglas Galbi: Written about 2100 years ago, Lucretius’s De rerum natura is an epic monument of philosophical and literary genius. Yet surviving medieval literature from the mid-ninth century and to early in the fifteenth century contains very few references to De rerum natura. Moreover, no copy of De rerum natura is known to have been made during that period.[2] These facts have prompted tendentious misrepresentation of relatively enlightened medieval European intellectual life. Fortunately, Guibert of Nogent’s Monodiae, which he wrote about 1115, provides a previously unrecognized and vitally important witness to medieval engagement with De rerum natura.

Trash Wars And Not So Progressive Walls

Max and Stacy discuss the fact that the most progressive feminist SJW virtue signaling nations like Canada or states like California or Connecticut often have some of the most regressive laws preventing the wealth gap from closing. In the second half, Max continues his interview with Randy Voller, former head of the Democratic Party in North Carolina, about the data proving an unprecedented wealth and income gap in the US and what to do about it.
Posted by Angelo Agathangelou at 6:07 am No comments: Links to this post

'Many Christians have posed several important questions about this new law, namely that there are no laws against openly blaspheming Christianity or Jesus. There are also no laws against accusing all Catholics of being pedophiles and no broad words with blanket definitions like ‘Anti-semitism’ that protects Christians from the criticism they receive on a constant basis.' 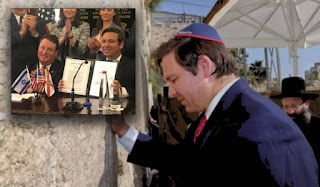 The Red Elephants: Governor Ron DeSantis of Florida recently signed a bill which added ‘anti-Semitism’ to the list of outlawed forms of discrimination in Florida, equating it with other forms of racial discrimination, reported the Tallahassee Democrat.
The major problem many have with this bill is that the definition of Anti-semitism under this law includes everything from saying the “Jews control the media,” “Jews are more loyal to Israel than to America,” to many other questionable statements that are protected under the first amendment of the United States constitution. It is also now illegal to question the number of Jews who died in the Holocaust. No other genocide has this protection in the world.

Read more »
Posted by Angelo Agathangelou at 3:00 am No comments: Links to this post

Trade War Backfires On US Hegemony: China May Shift Production To Russia

They should think about moving production to Russia,” He said, adding that “Chinese goods produced in Russia could be further sold in the United States and even in Europe.”

By Tyler Durden: President Trump's efforts to force China to 'fair' trade (along with sanctions and/or tariff threats against many other nations in the world) appears more likely to destabilize the unipolar US hegemon than support it.
Many multipolar-supporting nations are hording gold, seeking alternative payment systems, and creating bilateral trade agreements between themselves in an effort to skirt US threats (or merely to defend their own sovereignty in the long-run).
While we have seen China pushing the petro-yuan (rather anti-climactically for now) and Europe pushing INSTEX to enable trade with Iran (still unused for now), RT reports the latest shift away from the US 'system' and towards multi-polar collaboration is coming from China, where small and medium-sized enterprises, under pressure from Washington’s trade war, are studying the possibility of moving production to Russia.
According to the secretary general of the China Overseas Development Association (CODA), He Zhenwei, "many Chinese export-oriented small and medium-sized enterprises are now facing difficulties."