'To be chosen is to see oneself as an exceptional creation. It entails blindness to otherness.
It is a form of impunity. To be chosen
often involves a near or total lack of empathy. Such lack is often defined in terms of
acute narcissism and psychopathy.' 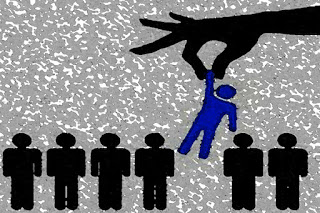 By ex-Jew Gilad Atzmon: A few days ago the BBC reported on an extraordinary French identity theft scam.  For two years starting in late 2015, an individual or individuals impersonating France's defence minister, Jean-Yves Le Drian, scammed an estimated €80m from wealthy French patriots.
The victims of this fraud were tricked into believing that they were being contacted by France’s Defence Minister who was requesting money to help pay ransom for journalists held hostage by Islamists in the Middle East. Since France officially does not pay ransom to terrorists, the fake minster assured the victims that payments could not be traced and asked for the funds to be wired to a bank in China.

Read more »
Posted by Angelo Agathangelou at 10:59 pm No comments: Links to this post

I’m A Journalist But Didn’t Fully Realize The Terrible Power Of U.S. Border Officials Until They Violated My Rights & Privacy 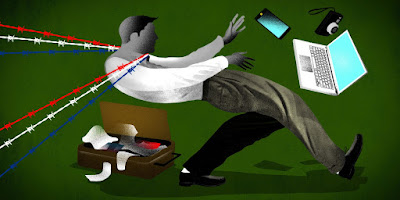 By Seth Harp: I should have kept my mouth shut about the guacamole; that made things worse for me. Otherwise, what I’m about to describe could happen to any American who travels internationally. It happened 33,295 times last year.


My work as a journalist has taken me to many foreign countries, including frequent trips to Mexico. On May 13, I was returning to the U.S. from Mexico City when, passing through immigration at the Austin airport, I was pulled out of line for “secondary screening,” a quasi-custodial law enforcement process that takes place in the Homeland Security zone of the airport.


Austin is where I was born and raised, and I usually get waved through immigration after one or two questions. I’m also a white man; more on that later. This time, when my turn came to show my passport, the U.S. Customs and Border Protection officer was more aggressive than usual in his questioning.

Read more »
Posted by Angelo Agathangelou at 10:07 am No comments: Links to this post 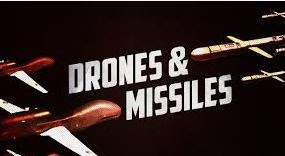 By Marjorie Cohn: The New York Times is reporting that on June 20, President Trump ordered military strikes against Iran to retaliate for its shootdown of a U.S. drone, but then pulled back and didn’t launch them. Officials told the Times that Trump had approved attacks on Iranian radar and missile batteries.
Trump tweeted, “We were cocked & loaded to retaliate last night on 3 different sights when I asked, how many will die. 150 people, sir, was the answer from a General. 10 minutes before the strike I stopped it, not proportionate to shooting down an unmanned drone.”
Nevertheless, shortly after midnight on June 21, Newsweek reported that regional U.S. military assets have been put on 72-hour standby.
On June 19, an Iranian surface-to-air missile shot down an unmanned U.S. surveillance drone. The White House claimed that its drone was at least 20 miles from Iran, in international airspace, while Iran maintains the drone was in Iranian airspace. Iran presented GPS coordinates showing the drone eight miles from Iran’s coast, which is inside the area of 12 nautical miles that is considered Iran’s territorial waters under the U.N. Convention on the Law of the Sea.

US Man Throws Own Feces At Judge During Burglary Trial, Jurors Acquit 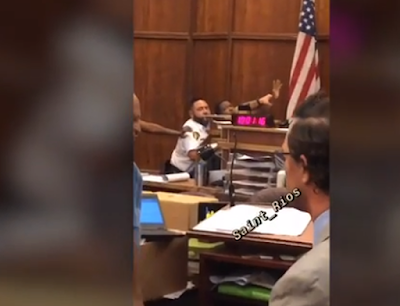 'It's a bold strategy, but it just may have worked.'
By Tyler Durden: Only in Florida.
A man charged with burglary "defecated during his criminal trial and tried to throw his feces at the judge" according to the NY Post. 33 year old Dorleans Philidor tried to throw his excrement at Miami-Dade Circuit Judge Lisa Walsh while sitting next to her in a wheelchair during his trial.
He missed.
There were no jurors in the courtroom at the time and dozens of corrections officers responded to restrain the man. The trial was moved and the courtroom was subsequently sanitized.
Philidor "also defecated on himself in a holding cell Thursday", according to Miami Dade Circuit Court spokeswoman Eunice Sigler.

Read more »
Posted by Angelo Agathangelou at 1:11 am No comments: Links to this post