Former apartheid Jewish Israel regime prime minister Ehud 'Shiksa Meat' Barak was a frequent guest of his bathroom buddy and fellow Jew the paedophile Jeffrey Epstein when he was in New York and had financial dealings with Epstein worth over $3 million. Barak was introduced to Epstein by another Jewish regime leader Shimon 'The Gentile Fudge Packer' Peres. 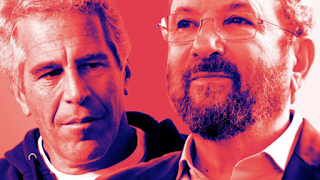 Photo Illustration by Sarah Rogers/The Daily Beast/Photos Getty
By Emily Shugerman: The residents of 301 East 66th St. always knew Ehud Barak was there by the flashy cars parked outside and burly security guards in the lobby. The former Israeli prime minster’s visits were an open secret among the tenants of the Upper East Side building, which is owned by Jeffrey Epstein’s younger brother.
Several residents of 301 East 66th St. told The Daily Beast they had seen Barak in the building multiple times over the last few years, and nearly half a dozen more described running into his security detail. The building is majority-owned by Epstein’s younger brother, Mark, and has been tied to the financier’s alleged New York trafficking ring. 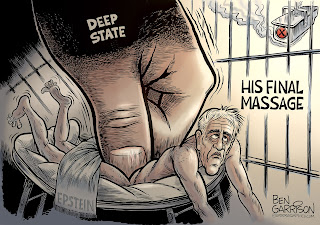 By Tyler Durden: The morning of Jeffrey Epstein's death, "shouting and shrieking" could be heard from his jail cell, according to CBS News - while guards attempting to revive him were saying "breathe, Epstein, breathe."
Epstein, who was reportedly in 'good spirits' recently - meeting with his lawyers for up to 12 hours a day to discuss his case - was found hanging in his Lower Manhattan jail cell with a bedsheet around his neck, which was reportedly secured to the top of a bunk bed, according to the New York Post.
On Monday, Attorney General William Barr said that the Epstein case "was personally important to him," and that the prison had "serious irregularities."
Notably, the staff at MCC reportedly violated prison protocol by failing to check on the high-profile inmate every 30 minutes, according to the Washington Post. Epstein, whose defense attorneys successfully lobbied for him to be taken off suicide watch about a week before he was found dead, was also supposed to have had a cellmate.

Max and Stacy discuss the bond market going parabolic, looking a whole lot like the dotcom bubble of the late 1990s. In just one week, the pile of negative yielding debt grew by $1 trillion, 97% of all of Germany’s €1.3 trillion in debt is negative and total global sovereign debt now stands at $55 trillion.

By Dr. Paul Craig Roberts: I appreciate my readers’ confidence in me.  However, I cannot clear up the Epstein matter for you.  Perhaps I can help you to think about it in a careful way.
First of all, many jail “suicides” are murders.  In 1995 Jesse Trentadue’s brother, Kenneth,  was mistakenly identified as the possible “missing man” who was thought to be involved in the Oklahoma City bombing and beaten to death in a federal prison by federal agents.  The prison claimed Kenneth hung himself in his cell.  The state coroner refused to confirm the suicide verdict and only much later after much pressure ceased his resistance to the coverup.  The prison wanted to cremate the body rather than return the body to family for burial.  But Jesse, a Salt Lake City attorney was suspicious.  When the body was returned, it was covered in heavy makeup.  Investigation revealed head lacerations, bruises and burns all over and other contusions that obviously were not self-inflicted and could not possibly have occurred from hanging. Apparently, Kenneth was tortured and beaten to death in an effort to get a confession. Jesse has been trying to get to get justice for the family for 24 years, but has been stonewalled by the US Department of Justice (sic).
It is not possible to commit suicide when a person is on suicide watch.  Former inmates and prison guards and correctional personnel have stated with certainty that Epstein did not commit suicide by hanging himself.
The only questions before us are:  Was Epstein murdered in order to protect members of the elite? Was Epstein switched out by the Deep State and a dead person of similar appearance left in his place?

Bettina Arndt talks to the mother of an 18-year-old boy whose jury applauded when he was acquitted after false rape accusations. The family is seeking to charge his accuser with perjury.
Posted by Angelo Agathangelou at 3:15 am No comments: Links to this post

The Secrets Of Silicon Valley: What Big Tech Doesn't Want You To Know

Corbett: Once a sleepy farming region, Silicon Valley is now the hub of a global industry that is transforming the economy, shaping our political discourse, and changing the very nature of our society. So what happened? How did this remarkable change take place? Why is this area the epicenter of this transformation? Discover the dark secrets behind the real history of Silicon Valley and the Big Tech giants.
Posted by Angelo Agathangelou at 12:24 am No comments: Links to this post