Is sexual assault Cute if women do it?
THE SPURGLARS!
Read more »
Posted by Angelo Agathangelou at 11:36 pm No comments: Links to this post

Outgoing director Coats urged Congress
to give permanent authorization.
By Jake Johnson: Civil liberties groups and privacy advocates raised alarm Thursday after the Trump administration called on Congress to reauthorize an NSA mass surveillance program that was exposed by whistleblower Edward Snowden.
The New York Times, which obtained the Trump administration's request to Congress, reported that "the administration urged lawmakers to make permanent the legal authority for the National Security Agency to gain access to logs of Americans' domestic communications, the USA Freedom Act." 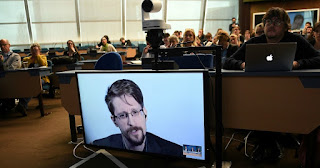 "It's long past time that this surveillance program was shuttered once and for all."
—Patrick Toomey, ACLU
Former US National Security Agency (NSA) contractor and whistleblower Edward Snowden speaks via video link as he takes part in a round table meeting on March 15, 2019. (Photo: Frederick Florin/AFP/Getty Images)
"The law, enacted after the intelligence contractor Edward J. Snowden revealed the existence of the program in 2013, is set to expire in December, but the Trump administration wants it made permanent," according to the Times.

Read more »
Posted by Angelo Agathangelou at 9:30 pm No comments: Links to this post

By ex-Jew Gilad Atzmon: Following Jeffery Epstein’s alleged suicide last week we have been deluged by a tsunami of narratives that do not adhere to the shifting official reports of his death. Presumably a few of the intimate secrets of the most powerful people on this planet will be buried with Epstein. While it is rational to believe that people powerful enough to impoverish continents or launch world wars that kill tens of millions could easily arrange the death of a single registered sex criminal in a NY prison cell, anyone who advanced such a scenario, however plausible, was immediately denounced as a ‘conspiracy theorist.’


Read more »
Posted by Angelo Agathangelou at 4:21 pm No comments: Links to this post

White Genocide Is In Our Future!

'Another Jew, Jason Blum, has produced a movie for NBC Universal titled “The Hunt.” It is about Jews and their Shabbos Goyim hunting and killing Trump Deplorables for sport. This is propaganda that accustoms people to murdering the white working class.'

By Tyler Drden: A new study has revealed that high levels of microplastics have been detected in some of the most remote regions of the world.
The discovery, published in the journal Science Advances, is the first international study on microplastics in snow, conducted by the Alfred Wegener Institute in Germany. 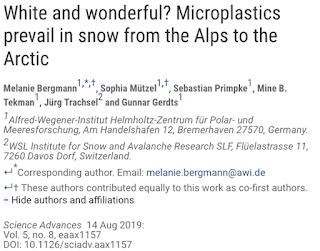 Melanie Bergmann, the lead scientist, and her team of researchers found microplastics from the Alps to the Arctic contained high levels of the plastic fragment, raises questions about the environmental and health implications of potential exposure to airborne plastics.
I was really astonished concerning the high concentrations," said co-author Gunnar Gerdts, a marine microbiologist at the Alfred Wegener Institute.
Bergmann explains that microplastics come from industrial economies where rubber and paints are used. The tiny fragments end up in the sea, where they're broken down by waves and ultraviolet radiation, before absorbing into the atmosphere.

Read more »
Posted by Angelo Agathangelou at 4:01 am No comments: Links to this post