Marcabru On Medieval Conscription Of Men And Women’s Response 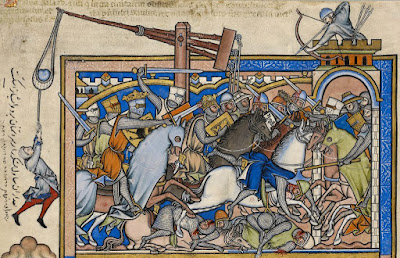 By Author Douglas Galbi: Men have long been socially regarded as disposable persons. Despite a recent court decision condemning sexist U.S. Selective Service registration, that injustice continues with little public notice. In late-medieval Europe, men’s life expectancy was about nine years less than that of women. In the ancient Mediterranean world, celebrated sayings of Spartan mothers urged men to die in battle. Cross-species and cross-cultural evidence indicates that disproportionate violence against men is constructed through social effects of sex. In poetry he wrote in the twelfth century in southern France, the man trobairitz Marcabru dared to suggest that part of the problem is women’s lack of concern for men’s lives.

Read more »
Posted by Angelo Agathangelou at 11:15 pm No comments: Links to this post

Despite Bibi 'The Baby Butcher' Netanyahu’s latest Iran hyperbole no one seemed to take him seriously: the Jewish Israeli press was amused by the desperate election stunt. His political rivals mocked the Jewish Israel regime PM and a few hours after Bibi’s press conference his best ally, President Trump, expressed his wish to meet President Hassan Rouhani. Somehow, world leaders were entertained by seeing the Jewish Regime PM, who threatens the entire region with his country’s nuclear arsenal, performing his victim spiel over Iran’s nuclear enthusiasms. 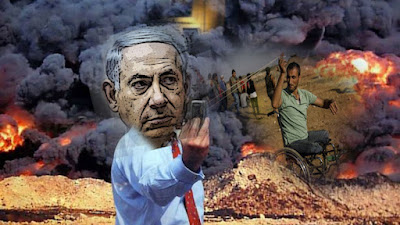 By Gilad Atzmon: Yesterday Netanyahu claimed he’d identified  a third secret nuclear site in Iran where Iran allegedly “conducted experiments to develop nuclear weapons.” Yet, despite the hyperbole no one seemed to take Netanyahu seriously: the Israeli press was amused by the desperate election stunt.
Read more »
Posted by Angelo Agathangelou at 9:48 pm No comments: Links to this post

"Financial repression is just
a euphemism for steeling."
Max and Stacy's no holds barred look at the shocking scandals behind the global financial headlines
Posted by Angelo Agathangelou at 6:57 pm No comments: Links to this post

During the first week of September 2019,
Jewish Israeli death forces IDF in the Palestinian Occupied Territories killed Palestinian children,
destroyed Palestinian property, stormed a Palestinian village, stole Palestinian land, and assaulted,
detained, and abducted more Palestinians…
In other words: it was pretty much
like every other week. 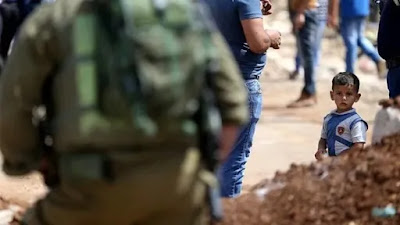 An Israeli Death Force merc stands guard during a protest against the closure of the entrance of the West Bank concentration camp Beta section entrance, near Nablus.
By Mohamad Torokman:

According to WAFA, at least two Palestinians were killed, and more than 37 others injured today by live bullets or rubber-coated rounds. Jewish death forces attacked the thousands of protesters taking part in the weekly Great March of Return at Gaza concentration camo wall, according to medical sources. Jews guarding the concentration camp fence […]

With over 1 million impressions as of Monday morning, it’s clear that Twitter users are not buying the smear campaign peddled by Zio-Shill ADL and other powerful Jewish orgs bent on silencing Alison Weir as she calls for justice for Palestinians. Who, What, When, Where, Why? 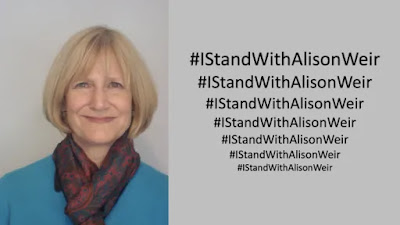 Powerful Zionist organizations are trying to shut down Alison Weir’s Fresno lecture on September 18th, but Twitter is having none of it.
By Kathryn Shihadah: By now, it’s common knowledge that activist and writer Alison Weir will be speaking about the Jewish Israel regime’s occupation of Palestine on Wednesday, September 18th.
Read more »
Posted by Angelo Agathangelou at 2:06 pm No comments: Links to this post

A Different Perspective On Feminism

'Patriarchy' Preserves Families,
'Feminism' Destroys Them
Where so-called patriarchy is preserved, there are fewer divorces. The non-feminist family is more stable. 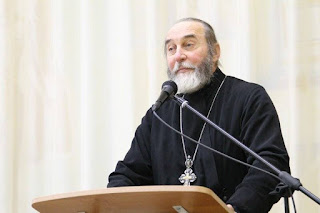 When feminism intrudes, the child becomes an idol, the woman becomes his priestess, and the man becomes an economic appendage. As a result, the entire family structure is destroyed.
Archpriest Sergei Rybakov, associate professor of theology department at Ryazan State University, chairman of the religious education department of the Ryazan diocese, answers the question: “Why does the modern family break up?”