For the last twenty years, Israel’s PM Bibi 'The Baby Butcher' Netanyahu has been warning that Iran is “six months away” from having an atomic bomb, demanding sanctions, and inching the US toward war with Iran. Israel has been working behind the scenes – with the US – for just as long. 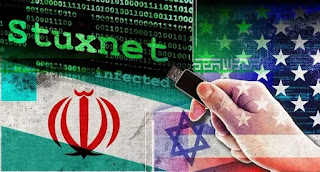 (credit: Graham Cluley/ Twitter) Stuxnet
Stuxnet was one of a series of viruses developed by Israel and the United States in the early 2000s, then turned loose to destroy Iran’s nuclear research facilities – although Iran was compliant with international norms, and known to have no nuclear weapons program. As part of the US-Israel strategy, young Iranian scientists were assassinated by Jews.
Read more »
Posted by Angelo Agathangelou at 6:46 pm No comments: Links to this post

Mike Buchanan: Julia Hartley-Brewer is a highly respected commentator, who has been periodically interviewing Mike Buchanan in a balanced way - including on the topic of Male Genital Mutilation - since he launched J4MB in 2013. All the interviews are on our YouTube channel. At the other end of the evolutionary spectrum to Julia Hartley-Brewer, Natalie Collins is a feminist with an IQ below that of the average fruit fly.

'A superhighway of weapons' supplied by Zio-shill US, 'amounting to more than 30,000 truckloads of weapons, equipment, and ammunition to support terrorists' 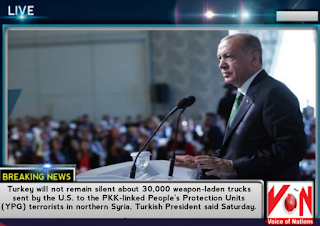 By Tyler Durden: Turkish President Tayyip Erdogan has called out the US for delivering more than 30,000 weapon-laden trucks to Syria to support the PKK-linked People's Protection Units (YPG) terrorist group, reported Press TV.
Speaking at the Justice and Development Party's meeting in Eskişehir, a city in northwestern Turkey, Erdogan said he wouldn't sit back in the shadows anymore about a superhighway of weapons supplied by the US, amounting to more than 30,000 truckloads of weapons, equipment, and ammunition to northern Syria to support YPG terrorists.
Erdogan further criticized the Trump administration for its "lack of commitment" to construct a safe zone in Syria along the Turkish border. 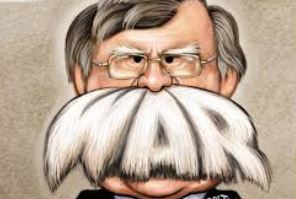 'One less warmongering neo-con-artist is left in the DC swamp'
By Tyler Durden: While there was some feverish speculation as to what an impromptu presser at 1:30pm with US Secretary of State Pompeo, Treasury Secretary Mnuchin and National Security Adviser Bolton would deliver, that was quickly swept aside moments later when Trump unexpectedly announced that he had fired Bolton as National Security Advisor, tweeting that he informed John Bolton "last night that his services are no longer needed at the White House" after "disagreeing strongly with many of his suggestions", in the process ending a tumultuous tenure marked by several setbacks in U.S. foreign policy.
According to sources, while Trump had been growing displeased with Bolton's belligerent recommendations and overall demeanor (recall "Bolton 'Deep in His Heart' Believes Trump Is a 'Moron,' Former Aide Claims"), the tipping point happened when Bolton expressed his displeasure with Trump's impromptu invitation of the Taliban to Camp David on the week of the Sept 11 anniversary, a peace overture which as we reported over the weekend, collapsed in the last moment.

'What more proof do you need that you live in The Matrix where what you know is only what those in charge want you to know?'

Dr Paul Craig Roberts: Many readers have responded to my request to let me know if they come across a report in the presstitute media of the study concluding that WTC 7 fell by controlled demolition.  At this time, the only known examples in the US media are a local TV station in Anchorage Alaska ( https://www.ktva.com/story/41015153/fire-did-not-cause-world-trade-center-building-7-collapse-uaf-study-suggests ) and a local newspaper in Fairbanks Alaska ( Fairbanks Daily News-Miner ).
The online site of the British newspaper Express provides this account:  https://www.express.co.uk/news/world/1175375/9-11-world-trade-center-twin-towers-September-11-conspiracy-theories
Other readers report:
“There have been no news that I have seen in any paper in canada on this report.”
“I haven’t come across a single report on US tv news, and I monitor it daily.”

"At this point, what are conservatives even conserving?"
Asks Paul Joseph Watson.
Posted by Angelo Agathangelou at 12:37 am No comments: Links to this post