huMAN
Posted by Angelo Agathangelou at 11:11 pm No comments: Links to this post

A Witness To The Collapse

'Women think their vagina lets them do whatever they want to do. ...The hatred that Identity Politics, the ideology of the American liberal/progressive/left, teaches against white people and the hatred that radical feminists teach against men, implies genocide and total social collapse. ...A British tribunal just fired a British doctor for refusing to call a 6-foot tall bearded man “madam”. ... It is the same all over the Western world.'

By Dr. Paul Craig Roberts: A terrible fear has come over me.  Observing its rate of collapse, I am likely to outlive Western Civilization, or what little remains of it.
British Labour Party Jeremy Corbyn thinks he can get elected prime minister by promising to open the UK’s border to all comers and to house them by seizing houses and office blocks.  This, of course, means a Camp of the Saints moment for Great Britain.  So many Brits are so far gone that Corbyn thinks this is a winning platform.
The current French president and German chancellor, as well as the European Union bosses, hold the same view.  There is to be no Europe. Only Hungary, Italy, and Poland dissent and insist on remaining Hungarian, Polish, and Italian.

JohnTheOther: If somebody grabs your ass, you have many ways yo respond. If you decide an immediate violent assault is the correct answer, you might just be deranged. An ideology advocating this violent approach is being promoted with your taxes on the Canada's National Broadcast Corporation.

The War On Men

Brittany Sellner
Read more »
Posted by Angelo Agathangelou at 7:00 am No comments: Links to this post

The Intelligence Service of Iran’s Islamic Revolutionary Guard Corps announced that it had foiled an “Israeli-Arabic” plot to assassinate Gen. Qasem 'Badass' Soleimani, the no nonsense commander of the Qods Force of the IRGC.

Submitted by SouthFront: Turkey is fortifying its border with the Syrian province of Idlib with cement blocks, barbed wires, and other military-style structures. According to Ankara, Idlib is in the hands of the so-called moderate opposition. However, it is for some reason concerned over the presence of these moderate activists in the border area. 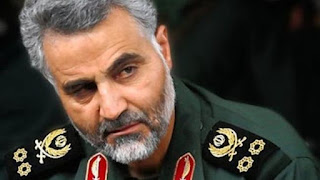 During the past months, the Turkish military deployed notable forces, including heavy military equipment, on the Turkish side of the border with the Syrian province. Most of these forces are located near the opposition-controlled border crossings.
Meanwhile, the situation once again escalated in the southern part of the Idlib de-escalation zone. On October 3, the Syrian Army shelled militant positions near the town of Kafr Nabudah and Baarbu in southern Idlib with heavy rockets.

Read more »
Posted by Angelo Agathangelou at 2:10 am No comments: Links to this post