'Feminism ignores all historical facts that tend to show that women occupied a higher place in the public’s estimation of social value than men did.' By Tom James: Hillary Clinton’s October 18, 2019 tweet asserting that NASA wrote to her personally when she was a little girl to tell her girls aren’t allowed to be astronauts is probably about as true as her claim to have come under sniper fire at a foreign airport1 and her suggestion that Tulsi Gabbard is a “Russian asset.”2 The claim was made in celebration of male-exclusionary space flight.3 As such, it is a good illustration of the illogic of feminist narrative.
Preliminarily, it should be noted that if Clinton was, as she claims, “a little girl” at the time, and if, as she claims, NASA referred to her as “a girl” in their supposed letter to her, then it is very possible they were simply telling her that children can’t be astronauts.

Read more »
Posted by Angelo Agathangelou at 11:03 pm No comments:

A Law Unto Itself 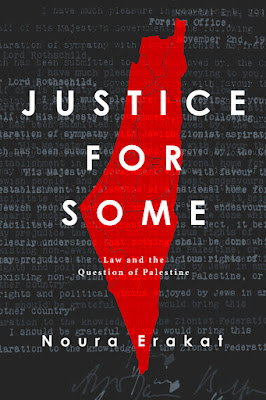 Justice for Some: Jewish Neo-Colonialists, Law and the Question of Palestine
By Salma Karmi-Ayyoub: Noura Erekat explores the role of international law in the struggle for Palestinian national liberation in her latest book Justice for Some.
It is unlike other books on the question of law and Palestine – such as Victor Kattan’s The Palestine Question in International Law and John Quigley’s The Case for Palestine: An International Law Perspective – that presuppose it is possible to arrive at definitive conclusions about the rights and obligations imposed by the law.
By contrast, Erekat’s starting point is that “law is politics: its meaning and application are contingent on the strategy that legal actors deploy as well as on the historical context in which that strategy is deployed.”

Europe is crumbling and Britain’s elite desperately want the British people to be part of the wreckage. ...Elites make their money when there's blood on the streets!

Authored by Kit Knightly: Brexit isn’t going to happen. Left or Right – Lexit or Rexit – it’s over. It’s time to make peace with that idea.
Penned in by the absurd Benn Act, No Deal is off the table, which means Britain will be forced to either remain or accept a deal that’s Remain by another name. The Letwin Ammendment and Johnson’s unsigned extension request are just morbid theatre. Unneccasary nails in a well-sealed coffin.
It’s all very Weekend at Bernies’ – A lame cast of characters, puppeteering Brexit’s corpse to keep up a tired joke that was never funny to begin with.
Parliament has become an absurd pantomime, where a clown Prime Minister – his majority willfully destroyed – sets up straw men that the “opposition” bayonet with increasingly maniacal glee. No thought is given to policy or consequences, only increasing the tally of Boris Johnson’s parliamentary defeats.

Read more »
Posted by Angelo Agathangelou at 10:11 am No comments:

"Shut Up, Toe The Line, Or Be Destroyed": Tulsi Gabbard Dismantles Establishment 'Hit-Job' In Viral Video

"Great! Thank you Hillary Clinton,” Gabbard tweeted late on Friday afternoon. "You, the queen of warmongers, embodiment of corruption, and personification of the rot, ...have finally come out from behind the curtain."


Read more »
Posted by Angelo Agathangelou at 6:45 am No comments: