Why Media Reports On Palestine Are Consistently Inaccurate

To enhance their financial control, Jew olegarchs' 'Jewish Lobby' has created an atmosphere in which journalists shy away from honest reporting on the issue of the Jews building Mega-Concentration Camps in Palestine for the locals and on the slaughtering of their population to steal their land. They are so fearful of being labelled anti-Semitic by the Jewish Lobby and their Holohoax religion brainwashed sheeple, they “daren’t even ask the [necessary] questions.” 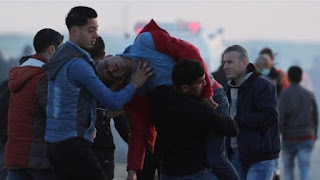 Reporting on Jewish built Mega-Concentration Camps for the indigenous people of Palestine fails to include context. Pictured: a wounded Palestinian is evacuated during the Great March of Return protest at the eastern part of the Jewish built Apartheid Wall that is Gaza Mega-Concentration Camp's fence, on February 22, 2019
By Alasdair Soussi: The Jews' open-air prison subjected to Israel’s and Egypt’s ongoing air, land and sea blockade, the coastal Mega-Concentration Camp, Gaza is, according to Amnesty International and several other rights groups, on the brink of a humanitarian disaster.
Read more »
Posted by Angelo Agathangelou at 9:40 pm No comments: Links to this post

'Parental alienation appears in ICD-11 as an Index Term under code QE52.0, thus providing clinical validation of the condition as a mental health issue. The feminists were not pleased.' 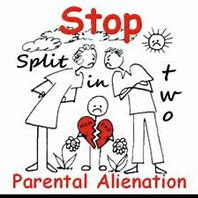 By MRA-UK: Prior to May this year (2019), parental alienation had been the subject of academic debate regarding its validity as a psychological condition. But that debate came to an end in May.
In May with the World Health Organisation Member States agreed to adopt the eleventh revision of the International Statistical Classification of Diseases and Related Health Problems, commonly known as ICD-11. Parental alienation appears in ICD-11 as an Index Term under code QE52.0, thus providing clinical validation of the condition as a mental health issue.
The feminists were not pleased. Just before WHO made their announcement in May, a “Collective Memo of Concern” with 173 signatories was sent to WHO seeking to reverse the decision. The lead author, Linda Neilson, was joined by a cast of lawyers, criminologists, sociologists and representatives of the VAWG lobby.
This axis is still intent on reversing the position by petitioning WHO accordingly. Inaction will leave the field open for them to succeed. Here’s how you can help defeat this backlash…