If the deep state is allowed to make its own policies against the will of the elected officials why should we bother with holding elections?

By Moon Of Alabama: Since Donald Trump was elected president the New York Times' understanding of the 'Deep State' evolved from a total denial of its existence towards a full endorsement of its anti-democratic operations.


A wave of leaks from government officials has hobbled the Trump administration, leading some to draw comparisons to countries like Egypt, Turkey and Pakistan, where shadowy networks within government bureaucracies, often referred to as “deep states,” undermine and coerce elected governments.


So is the United States seeing the rise of its own deep state?


Not quite, experts say, but the echoes are real — and disturbing.
Read more »
Posted by Angelo Agathangelou at 12:12 pm No comments:

Rock God Pink Floyd's Roger Waters: The US And UK Are Trying To KILL Julian Assange!


Sticking it to 'The Man', legendary former Pink Floyd co-founder and frontman Roger 'too cool for brain-rinse school' Waters discusses the world's greatest journalist Wikileaks founder Julian Assange’s latest extradition hearing at Westminster Magistrates 'Kangaroo' Court and why it makes him ashamed to be English, why he believes the UK and US are attempting to kill Julian, why the extradition case shouldn’t even be happening and is a mockery of British justice,

Read more »
Posted by Angelo Agathangelou at 8:38 am No comments:

Read more »
Posted by Angelo Agathangelou at 5:11 am No comments: 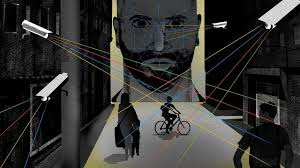 By Olivia Solon: Microsoft has invested in a startup that uses facial recognition to surveil Palestinians throughout the West Bank, in spite of the tech giant’s public pledge to avoid using the technology if it encroaches on democratic freedoms.
AnyVision, which is headquartered in Israel but has offices in the United States, the United Kingdom and Singapore, sells an “advanced tactical surveillance” software system, Better Tomorrow. It lets customers identify individuals and objects in any live camera feed, such as a security camera or a smartphone, and then track targets as they move between different feeds.

Read more »
Posted by Angelo Agathangelou at 1:40 am