Sympathetically Understanding Why Some Men Distrust All Women 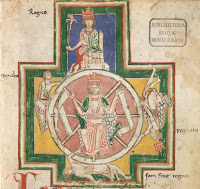 By Author Douglas Galbi: Some men distrust all women. Not all men are like that, but some are. Calling those men nasty names like “misogynist” is childish and hard-hearted. One should try to understand sympathetically why those men became so distrustful of women. With respect to that issue, as for many others, medieval literature provides a vital tool for seeking enlightenment.
Most men find themselves strongly attracted by nature to young, beautiful women. Love for women can put men in danger and cause men suffering. A twelfth-century lyric laments:


Love, common to all,
is sweet in its beginning.
What others might repress
now in me awakens.
I suffer many injuries,
openly and secretly,
so that I might rest sweetly,
welcomed in your little bed.

Read more »
Posted by Angelo Agathangelou at 6:14 pm No comments: Links to this post

The Czech parliament’s decision to pass a resolution condemning the Palestinian-led boycott, divestment and sanctions movement as anti-Semitic last week is only the most recent example of how the panic over anti-Jewish-apartheid movenemt 'BDS' has reached a fever pitch. 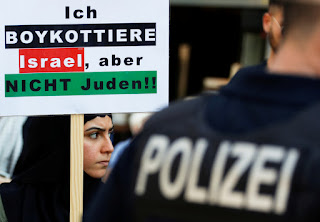 A protester holds a placard reading “I boycott Israel but not Jews” during a Palestine solidarity event in Berlin. Fabrizio Bensch Reuters
By Barry Trachtenberg: This latest round of attempts to stop public criticism of Israel’s treatment of Palestinians began in Britain in May. Jeremy Hunt, at the time foreign secretary and running for the leadership of the Conservative Party, attacked supporters of BDS by declaring that “boycotting Israel – the world’s only Jewish state – is anti-Semitic.”
Far more unnerving, Germany’s parliament, the Bundestag, passed a resolution that same month that condemned BDS as inherently anti-Semitic.
Several days later, Germany’s commissioner on anti-Semitism Felix Klein warned that “I cannot advise Jews to wear the kippah everywhere, all the time, in Germany,” in a statement made just days before the annual al-Quds march – a Palestine solidarity event – in Berlin.

BBC Radio 4: Into The Manosphere 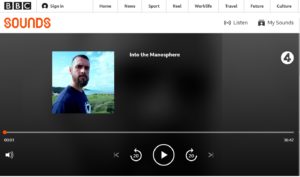 By Mike Buchanan: Broadcast last night
(audio, 36:44).
From the programme website:
Young men are facing a crisis of masculinity. To deal with it, they have options – the manosphere, a mainly online world where the challenges facing 21st century men are exclusively the fault of women, [J4MB: wrong, many are the fault of men] or the anti-manosphere. [J4MB: What the hell is that?] Philip Tanzer is a Men Rights Activist (or MRA) and manosphere convert who lives in Scotland. He’s already a keyboard warrior, fighting the ‘feminist establishment’ from the highlands of Scotland giving motivational talks to the young men who come to his salon and art gallery. He allows producers to follow him as he attends the International Conference on Men’s Issues in Chicago where many of the main leaders and thinkers that together form the nebulous community congregate, including a British MP, far-right YouTubers and a surprising number of women. Along the way, he gives a unique insight into the individual stories behind the growing group of men in the UK and US who find their tribe in the online forums dedicated to reversing the feminist agenda. He also meets and debates with men and women [J4MB: feminist “academics”] who believe the manosphere is a dangerous and misogynist place and looks at alternative ways to address the growing levels of mental ill health and suicide in young men – could drumming around a campfire be a better way for men to connect?

Read more »
Posted by Angelo Agathangelou at 12:02 pm No comments: Links to this post

Killing Me Softly With Militarism: The Decay Of Democracy In America

There are many signs of the increasing embrace of militarized values and
attitudes in this country. 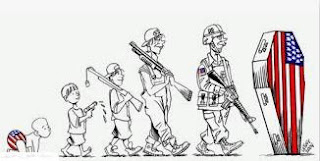 By William J. Astore: When Americans think of militarism, they may imagine jackbooted soldiers goose-stepping through the streets as flag-waving crowds exult; or, like our president, they may think of enormous parades featuring troops and missiles and tanks, with warplanes soaring overhead. Or nationalist dictators wearing military uniforms encrusted with medals, ribbons, and badges like so many barnacles on a sinking ship of state. (Was Donald Trump only joking recently when he said he’d like to award himself a Medal of Honor?) And what they may also think is: that’s not us. That’s not America. After all, Lady Liberty used to welcome newcomers with a torch, not an AR-15. We don’t wall ourselves in while bombing others in distant parts of the world, right?
Read more »
Posted by Angelo Agathangelou at 9:02 am No comments: Links to this post

Fools + Voices Of The Voiceless 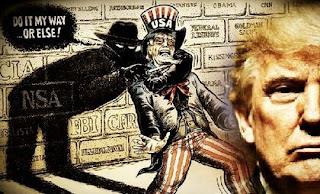 By Dr. Paul Craig Roberts: This is a surprisingly good report from Robert Merry. http://www.informationclearinghouse.info/52461.htm
The only mistake Merry makes is his erroneous statement that Trump held up aid to Ukraine to pressure the Ukrainian president to investigate the Ukrainian firm that made $1,750,000 payments to the corrupt Biden and his corrupt son. The transcript of the telephone call between Trump and the Ukrainian president shows no Quid Pro Quo, and the Ukrainian president says there was none. The Quid Pro Quo was entirely on Biden’s part when he told the president of Ukraine to fire the prosecutor investigating the firm that was paying him and his son seven figures in protection money or forfeit $1 billion in US aid. You can watch it here: https://www.wsj.com/video/opinion-joe-biden-forced-ukraine-to-fire-prosecutor-for-aid-money/C1C51BB8-3988-4070-869F-CAD3CA0E81D8.html
Moreover, even if Trump did threaten to withhold aid from a country that was covering up corruption by a US vice president and his son, that is the US president’s right.