'From the beginning, the “97% consensus” claim about climate change has been dubious, with supporters claiming that it represented much more than it really did...' 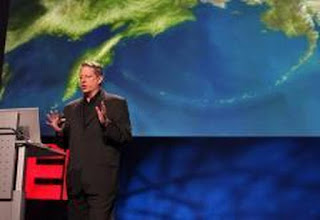 Authored by Robert Murphy: One of the popular rhetorical moves in the climate change debate is for advocates of aggressive government intervention to claim that “97% of scientists” agree with their position, and so therefore any critics must be unscientific “deniers.”
Now these claims have been dubious from the start; people like David Friedman have demonstrated that the “97% consensus” assertion became a talking point only through a biased procedure that mischaracterized how journal articles were rated, and thereby inflating the estimate.
But beyond that, a review in The New Republic of a book critical of mainstream economics uses the exact same degree of consensus in order to cast aspersions on the science of economics.

President al-Assad said the U.S. story about the killing
of the Daesh leader, should not be believed,
unless they provide evidence.
Damascus, SANA: President Bashar al-Assad stressed that the scenario broadcast by the US about the killing operation of Abu Bakr al-Baghdadi, leader of Daesh organization, is part of the US tricks and we should not believe what they say unless they give the evidence. - The President added in an interview given to Al-Sourea and al-Ikhbariya TVs on Thursday, that the Russian-Turkish agreement on northern Syria is temporary one, and it reigns in Turkish aspirations to achieve more damage through occupying more Syrian territories and cut the road in front of the US.
Read more »
Posted by Angelo Agathangelou at 7:56 pm No comments: Links to this post

214 Gentiles have been Ethnically Cleansed by the Jews during Great March of Return protests along Gaza Mega Concentration Camp’s eastern and northern 'Apartheid Wall'. ...Nearly 9,500 more have been maimed by exploding bullets during the demonstrations. 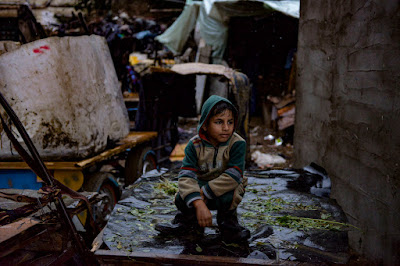 Is China Playing Trump & His Trade Team For Chumps?

If we put ourselves in the shoes of the
Chinese negotiators, we realize there's
no need to sign a deal at all... 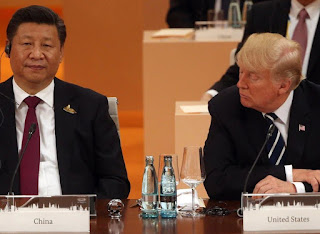 Authored by Charles Hugh Smith: If we put ourselves in the shoes of the Chinese negotiators, we realize there's no need to sign a deal at all.
The world's worst negotiating strategy is to give the other side everything they want in exchange for worthless empty promises, yet this is exactly what Trump and his trade team are doing. All the Chinese trade team has to do to get rid of tariffs and other U.S. bargaining chips is mutter some empty phrase about "agreeing in principle" and the U.S. surrenders all its bargaining chips.
If the other side are such naive chumps that they give you everything you want without actually committing to anything remotely consequential, why bother with a formal agreement? Just play the other side for the chumps they are: if they threaten to reinstate tariffs, just issue another worthless press release about "progress has been made."

Read more »
Posted by Angelo Agathangelou at 11:55 am No comments: Links to this post

The following is a talk given at Chester Interfaith Palestine Conference 2019
Gilad Atzmon: In the last few days Zionist and Israeli advocacy groups were desperate to cancel the gathering of many local peace enthusiasts, intellectuals and religious leaders. Every Hasbara trick was put into play: Social media abuse, intimidating phone calls, smears and lies. But none of it worked. The pro- Israeli bigoted efforts backfired - - interest in the conference grew immediately, the local community stood for Palestine, peace, harmony and free speech!

Read more »
Posted by Angelo Agathangelou at 8:20 am No comments: Links to this post

Sailing To Old Pavia As Archpoet: An Eternal Truth About Humanity 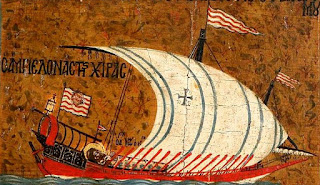 By Author Douglas Galbi: This is no country for young men. The old in one another’s Facebook feeds, the girls — that sterile generation — twittering fake wage-gap claims to macking men in bars; this me-too-too’ing will turn to dust. Caught in such frenzied solitude all neglect monuments of unageing intellect.
The young man is but disparaged thing, an oppressor with a stick, unless minds work their reach and think, and bravely think, through every failing in their reasoning. There is no thinking school, but engaged minds open to their own magnificence. And therefore we shall sail as Archpoet to the sinning city of old Pavia.


Honored Archbishop, to you I do confess,
it’s a goodly death I die, self-murder by excess:
stricken to the heart by female loveliness,
those that I cannot touch, I mentally possess.
It’s a matter most difficult, to overcome our nature,
seeing some maiden fair, keeping our minds pure;
being young how can we obey so harsh a law,
for the body’s lightness no one has a cure.

Read more »
Posted by Angelo Agathangelou at 2:52 am No comments: Links to this post