Max and Stacy discuss Warren Buffett’s $128 billion cash pile. In the second half, Max talks to Professor Steve Keen about the rapidly climbing pile of U.S. debt now over $23 trillion and whether or not it matters.
Posted by Angelo Agathangelou at 11:48 pm No comments: Links to this post

'The most brutal way to stop children from being educated is of course to murder them.' 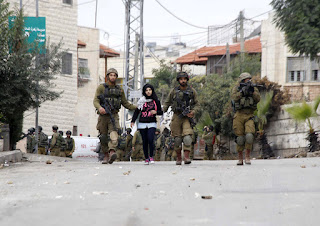 Neo-colonialist Jewish Death Forces IDF detain a schoolgirl after clashes with protestors near Hebron in 2015. Israel’s military court system prosecutes between 500-700 Palestinain chidlren each year. Muhesen Amren APA images
By Greg Shupak: Traveling across Palestine, as I did to give lectures earlier this year, means following a perpetually fresh trail of repression.
Omnipresent are the prison guard towers, the barbed wire, the Jewish IDF with their massive guns and 'The Apartheid Wall'.
The day before an event at which I was speaking in Beit Sahour, a small town adjacent to Bethlehem, residents held a funeral for Sajid Mizher, a 17-year-old volunteer medic Jewish IDF had just shot dead in Dheisheh refugee camp despite his wearing an identifying vest.

'...part of a larger pattern as is Jewish Israel’s routine killing and maiming of Gentile children, 44 of whom it shot on 25 October in Gaza.'
Read more »
Posted by Angelo Agathangelou at 4:08 pm No comments: Links to this post

Far from being the work of a single political party, intelligence agency or country, the power structure revealed by the network connected to Epstein is nothing less than a criminal enterprise that is willing to use and abuse children in the pursuit of ever more power, wealth and control. 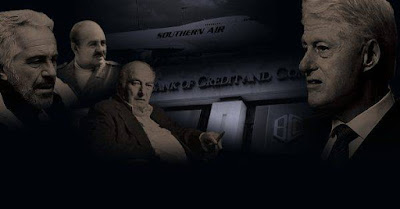 By Whitney Webb: On August 10th, and for several days after, speculation swirled after it was announced that Jeffrey Epstein had been found dead in his cell. His cause of death has officially been ruled suicide by hanging.
Epstein, the billionaire pedophile and sex trafficker with a myriad of connections to the rich and powerful in the United States and several other countries, had told those close to him that he had feared for his life prior to his sudden “suicide,” the Washington Post reported, while his defense lawyers claimed that he had planned to cooperate with federal authorities.

Read more »
Posted by Angelo Agathangelou at 11:02 am No comments: Links to this post

The Jewish Progressive Agenda According To Bernie Sanders

'Sanders takes up the same line you’d expect from an ADL spokesman, ticking every Hasbara box from the Jewish right of ‘self determination‘ to the primacy of Jewish suffering.' 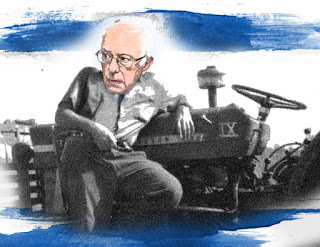 By ex-Jew Gilad Atzmon: In the 2016 Democratic primaries, Bernie Sanders presented himself as an American who happened to be Jewish.  Now, in a radical shift, Sanders identifies as “a proud Jewish American.” The progressive politician went from speaking in a universalist voice to defining himself as a 3rd category Jew, i.e., a person who identifies politically as a Jew (as opposed to identifying religiously:1st category, or ancestrally: 2nd category). In his new capacity as a proud Jew, Sanders has declared all out war on Anti Semitism on behalf of his people and in the name of what he describes as ‘multicultural progressive values’.

Read more »
Posted by Angelo Agathangelou at 6:53 am No comments: Links to this post