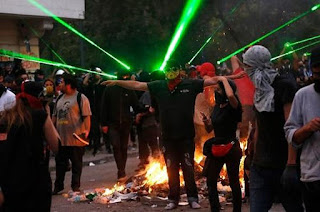 Authored by Elias Marat: As the people of Chile enter the second month of massive protests against the neoliberal government of President Sebastian Piñera, clashes have continued unabated between demonstrators and the militarized security forces of the South American state.
yhe protests, which began October 14 as a response to rising public transit costs, have quickly become radicalized as social movements, students, workers’ unions, and a vast cross-section of Chilean society have focused their anger on high levels of inequality in the country, rising living costs, and a constitution inherited from the 1973-1990 dictatorship of Augusto Pinochet.
As the protests have raged, the repression unleashed on demonstrators has become increasingly brutal and high-tech. Chile’s protesters, however, have responded with a combination of ingenuity, persistence, and equally high-tech tricks to fend off police attacks.
Such was the case earlier this week in footage that quickly went viral on social media Wednesday that appeared to show a police unmanned aerial system (UAS) being disabled as protesters aimed run-of-the-mill green laser pointers—the type available in any Office Depot or Staples—at the law enforcement-grade drone.

Popeyes Fight with Commentary
In the land of the free and the home of the brave...

How Surveillance And Propaganda Work In ‘The Free World’

'There are some 25 million closed-circuit surveillance cameras world-wide and the United Kingdom [with 4 million cameras] has more CCTV activity than any other European country, per capita…' 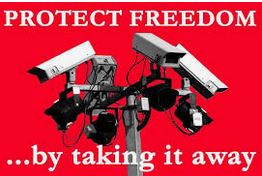 By Brian Cloughley: A Bloomberg report of October 22 was concise and uncompromising in declaring Russia to be a surveillance state. Harking back to the good old days of the Cold War, as is increasingly the practice in much of the Western media, Bloomberg recounted that “The fourth of 10 basic rules Western spies followed when trying to infiltrate Russia’s capital during the Cold War — don’t look back because you’re never alone — is more apt than ever. Only these days it’s not just foreigners who are being tracked, but all 12.6 million Muscovites, too. Officials in Moscow have spent the last few years methodically assembling one of the most comprehensive video-surveillance operations in the world. The public-private network of as many as 200,000 cameras records 1.5 billion hours of footage a year that can be accessed by 16,000 government employees, intelligence officers and law-enforcement personnel.”

...but few people give a damn about men in Gynocentric 2019, ...Lets talk about the minority one third of Gentiles murdered by the Jewish neo-colonialists, the women and children. 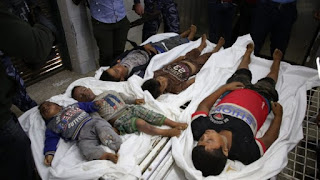 A third of the Palestinians killed by Jewish Israeli death forces IDF in the 3-day offensive on Gaza were women and children. 111 'Palestinians', including 46 children [mostly little boys] and 20 women, were injured. The bombardment damaged dozens of homes, 15 schools, farmland. 8 members of one family were killed in their home by the Jews. No Jews were killed; 5 were injured by kickback from their own weapons as they went about slaughtering Gentiles… Three reports below:

Read more »
Posted by Angelo Agathangelou at 3:36 am No comments: