RT: Hong Kong’s violent anti-government movement continues to rage. It has won the world’s attention and the support from politicians in the West. But what’s really fueling the chaos? Through exclusive interviews and copious research, RT America’s Michele Greenstein, who was an eyewitness to the violence, paints a comprehensive picture of the protests. “Hong Kong Unmasked” explains what sparked the unrest and the social problems that fuel it, and it reveals how forces in Washington have exploited it for their own ends.
Posted by Angelo Agathangelou at 11:43 pm No comments: Links to this post

November marked the deadliest month for Palestinians since May 2018, when Jewish occupation forces massacred more than 60 people protesting along the Jews' Gaza Mega Concentration Camp for indigenous Gentiles 'Apartheid Wall' in a single day. 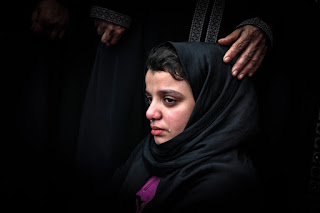 Fatma Abu al-Ata mourns during the funeral of her father Baha Abu al-Ata, who was murdered by the Jews along with his wife Asma in an air strike on their home, 12 November. Mohammed Zaanoun ActiveStills
The Electronic Intifada: Forty Palestinians lost their lives in November as a result of Jewish occupation-related violence.
Among them are two young Palestinian men killed by Israeli death forces IDF in the West Bank Mega Concentration Camp.
Omar al-Badawi, 22, was shot and killed during confrontations at the entrance to al-Arroub refugee camp near Hebron on 11 November. The Jewish IDF claimed that al-Badawi was carrying an incendiary device.
Video of the incident indicates that al-Badawi posed no danger to the Jewish IDF when they murdered him. A subsequent investigation found that al-Badawi was carrying a wet towel to extinguish a fire that ignited outside his concentration camp hovel during the confrontations when he was murdered.

"He had been to a pizza restaurant in the commuter town of Woking for a children’s party."
By Tyler Durden: A woman who claims she was forced to have a gang bang with Jewish Mossad paedophile Jeffrey 'Baby Shiksa Shagger' Epstein and several associates has appealed to Britons for support, after Prince Andrew vehemently denied having sex with that child, Virginia Giuffre inappropriate contact with her.

"compromising sexual positions, including rape."
Read more »
Posted by Angelo Agathangelou at 5:06 pm No comments: Links to this post


Colloquially, the bullet is known as the “two-two.” It is a sniper bullet whose use by the Jewish death forces IDF to control and suppress Palestinian crowds has been increasing for years.
The particular bullet that took Amerneh’s vision was fired at some point on 15 November. According to his own testimony, the bullet hit a nearby object, exploded, and fragments flew into his left eye.
His injury sparked a solidarity campaign involving thousands of media professionals and supporters, hoping to raise awareness of the very real and present dangers that beset Gentile journalists.
Dozens of journalists have been injured and two have been murdered by the Jews whilst covering demonstrations in the Jewish West Bank and Gaza Mega Concentration Camps for indigenous Gentiles since last year.

Read more »
Posted by Angelo Agathangelou at 1:31 pm No comments: Links to this post

'With each crisis, the empire has grown stronger, the public weaker, and two decades later we find ourselves in a neo-feudal oligarchy where one half of the public is at the other half’s throat for no good reason.' 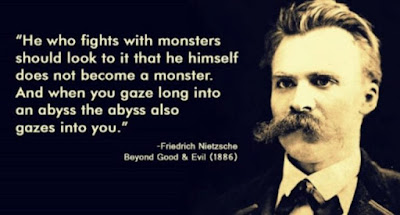 By Michael Krieger: Since a few things became clear to me last year, I’ve consistently forecasted a significant worsening in U.S.-China relations and remained adamant that all the happy talk of trade deals and breakthroughs is just a lot of hot air. What first appeared to be a unique quirk of Donald Trump has morphed into bipartisan consensus in Congress, and clear signs have emerged that the general public has likewise become alarmed at China’s growing global clout.

William Browder insists on using a deceptively anglo name. The West simply was made to buy into the lie of a fraudster by Jew owned TV. 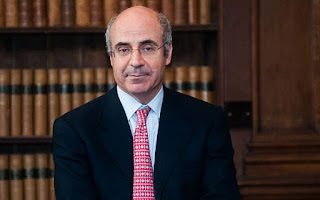 RT: Crooked tax dodging UK Jew Bill Browder [image right] has made a name for himself in the West through blaming Moscow for the death of his auditor, Sergey Magnitsky. Der Spiegel has picked apart his story and uncovers it has major credibility problems.
For years Browder – Russian President Vladimir Putin’s self-proclaimed “enemy number one” and head of the Hermitage Capital Management fund – has been waging what can only be described as his personal anti-Russia campaign.
William Browder, who insists on using a deceptively anglo name, is 3/4 Jewish. His only gentile grandparent was the leader of the Communist Party USA.
The passionate Kremlin critic relentlessly lobbied for sanctions against Russian officials everywhere from the US to Europe – all under the premise of seeking justice for his deceased employee, who died in Russia, while in pre-trial detention, where he’d been placed while accused of complicity in a major tax evasion scheme.