All That Was Hidden Is Being Revealed

Max and Stacy discuss all that was hidden being revealed in the age of Trump. With geopolitics, for example, most in U.S. corporate media used to claim that they advocated for bombing places like Iraq or Libya solely for the women and children. Trump, however, has revealed the truth: it’s always been about the oil. They also discuss the long hidden inflation that is starting to possibly reveal itself in the rising rates of subprime loan delinquencies. In the second half, Max interviews Dave Collum, professor of organic chemistry at Cornell University and a libertarian with an annual year in review newsletter. They discuss ‘quantitative failure’ and share buybacks.
Posted by Angelo Agathangelou at 10:01 pm No comments:

Woman Who Spent $100,000 To Look Like "Blowup Doll" Is Facing Complications From Cosmetic Surgeries 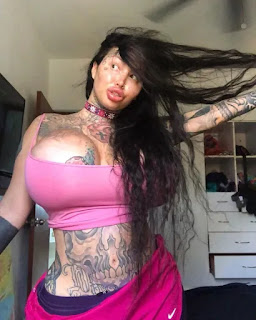 “I have been making paintings with my vagina..."
By Tyler Durden: Color us surprised.
A woman who, by age 24, has had $100,000 worth of cosmetic surgery to make herself look like a "blowup doll" is now suffering from complications.
According to the NY Post, Mary Magdalene has modified her body with a brow lift, three nose jobs, cheek and lip fat transfers, three boob jobs, 20 dental veneers, “Brazilian butt lifts,” numerous lip fillers and a “custom-designed” vagina.
She is on a quest to acquire "the fattest labia in the world," according to the article.
Because, you know, you've got to have goals in life.

Read more »
Posted by Angelo Agathangelou at 6:29 pm No comments:

The Race To Construct The First Solar Space Station

“We hope to strengthen international cooperation and make scientific and technological breakthroughs so that humankind can achieve the dream of limitless clean energy at an early date,"
Wang Li.

Authored by Tsvetana Paraskova: China aims to turn the dream of science fiction writer Isaac Asimov into reality by building a solar power station in space by 2035, according to Chinese researchers.

Scientists at the China Academy of Space Technology (CAST) plan to build a solar power station in space that would capture solar energy from the Sun and beam it wirelessly to the Earth via lasers or microwaves, China’s news agency Xinhua reported on Monday.

"European energy policy must be
decided in Europe, not the U.S.”
By Tyler Durden: Included in Wednesday's just passed mammoth 2020 US National Defense Authorization Act (NDAA) — which increases the Pentagon budget by $22 billion (to a whopping $738 billion) — were long-threatened sanctions on Russia's Nord Stream 2 underwater natural gas pipeline. 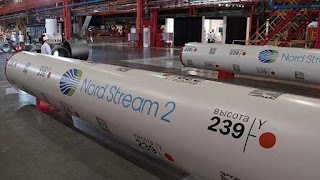 Via Russia Business Today
In the House bill, expected to be approved by the Senate sometime next week before Trump signs it into law, are measures which specifically target companies assembling the pipeline, a last ditch US effort to block the controversial 760-mile project that would allow Russia to export natural gas directly to Germany, depriving Ukraine of badly needed gas transit fees along the current route for Russian supplies.
The $10.5 billion Nord Stream 2, which runs parallel to the existing Nord Stream pipeline, has been spearheaded by Gazprom and five European energy companies, and is reportedly nearing completion.

Read more »
Posted by Angelo Agathangelou at 10:19 am No comments:

With its plan for a new Hebron settlement, Jewish Israel has reminded Palestinian Gentiles that there are no limits – military, legal, moral or diplomatic – to the 'Jewish land thieves' [soft hasbara name 'settlers'] power. Jewish Israel will steal [soft hasbara name 'annex'] Gentiles' land where it chooses and deceptively refashion the resulting apartheid system as the rule of law, because apparently the Israeli Jews and their international Jewish supporters are self-centred, inhuman, perhaps even the very definition of evil [aka 'the chosen ones'] 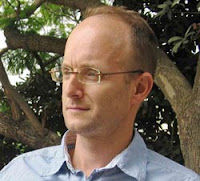 Proposed destruction of the West Bank Mega Concentration Camp for indigenous Gentiles' market to make way for a new Jewish settlement is the Jewish Israeli government’s route to refashion its apartheid system as the rule of law
By Jonathan Cook: US President Donald Trump told thousands of Israel’s supporters at a rally in Florida at the weekend that some American Jews “don’t love Israel enough”. It is certainly troubling that a US president insists a section of his country’s citizens – the Jewish population – be required to love a foreign state. But then Trump went further, muddying the waters about what constitutes “Israel”.

Read more »
Posted by Angelo Agathangelou at 6:52 am No comments:

Dr Randomercam is a YouTuber, comedian, and a member of the Honey Badger Brigade. Our thanks to Elizabeth Hobson and Natty for organising this event, held annually in London in commemoration of International Men’s Day.
Speech delivered at Messages for Men, in London on Sun 17 Nov 2019.

Read more »
Posted by Angelo Agathangelou at 3:42 am No comments:

DoctorRandomercam: Fine. You want clickbait? Fine. Have your poxy clickbait. Fine. I'm going to set my watch by how badly this doesn't work.
Posted by Angelo Agathangelou at 12:22 am No comments: