The parents of Gentile children with terminal cancer are among those who are being denied travel permits by the Jewish apartheid Israel regime. Miral Abu Amsha, a little 10-year-old girl suffering from leukemia, is undergoing chemotherapy in a Nablus hospital by herself. And she’s not the only child in that situation. 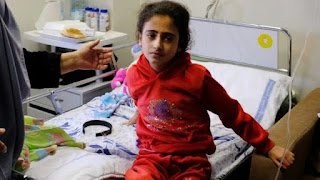 By Gideon Levy and Alex Levac: The look on Miral’s face says it all: the anguished features of a little girl, a study in pain. There are balloons in the room, dolls on the bed, and a grandmother by her side – but Miral’s face bespeaks suffering. Occasionally, she is on the brink of tears, but holds back in order not to cry in front of strangers. But at some point, she can no longer contain herself and begins to weep. She’s sitting on the bed, the chemo tube attached to her arm, dripping the liquid directly into her vein.

'A portrait of the essence of Jewish Israeli evil.'
Read more »
Posted by Angelo Agathangelou at 10:51 pm No comments: Links to this post

This Is America 2020: 10 Examples That Show How Dramatically The U.S. Has Changed 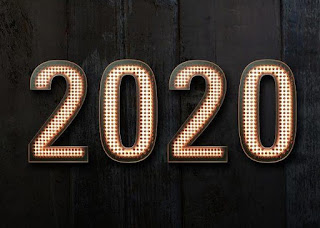 Authored by Michael Snyder: One thing that you can count on in life is that things are going to change. And these days the pace of change in America is absolutely breathtaking. Our culture is in the process of being radically transformed, and the direction of that change has not altered very much at all no matter which political party has been in power in Washington. Many of the values that are now embraced by a solid majority of the population run directly counter to the values that once dominated our society, but only a small minority of Americans seem alarmed by that fact. It appears to be exceedingly unlikely that there will be any deviating from the path that our nation has chosen, because at this point the American people seem quite satisfied with the dramatic “progress” that is taking place.
Are we on the right track as a nation?

Read more »
Posted by Angelo Agathangelou at 7:36 pm No comments: Links to this post

Dr. Guy Bechor On American Jewry And Its Destiny

By ex-Jew Gilad Atzmon: According to Jewish Israeli academic Guy Bechor the fate of American Jewry is sealed.

In this three years old video Dr. Bechor points at a Jewish progressive ‘conspiracy’ against America, its values and ideals. Bechor reckons that it is just a question of time before American Jews flee to the Israel terror regime. He also insists that the so-called progressive Jews won’t be allowed to seek refuge in the Jewish Israel.

Posted by Angelo Agathangelou at 4:31 pm No comments: Links to this post

How US Congress & The Banksters Stole Christmas 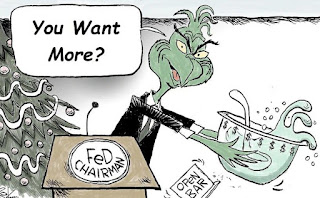 Authored by Dr. Ron Paul: The bickering over impeachment did not stop the president and Congress from coming together last week to avert a government shutdown by passing a 1.4 trillion dollar spending package.
The bipartisan agreement has something for everyone — a 22 billion dollars increase to bring total spending on militarism to 738 billion dollars, and a 27 billion dollars increase to bring total spending on domestic programs to 632 billion dollars. It also imposes a national ban on selling tobacco products, including e-cigarettes, to anyone under 21.
The agreement was split into two bills. Both bills were unveiled last Monday afternoon. The bills passed the House on Tuesday, so only the House leadership and the members of the Appropriations Committee (and their staffs) who helped write the over 2,000-page deal had any idea what was in the bills. But most members voted for the spending bills because they were fearful of backlash over another Christmastime government shutdown. House leadership simply “waived” the rule requiring that all legislation be available at least three days before being voted upon.
The modern practice of funding the government via gigantic omnibus bills that are rushed into law puts the growth of government on autopilot.

'The magnitude of feminism’s
ideological incoherence.' 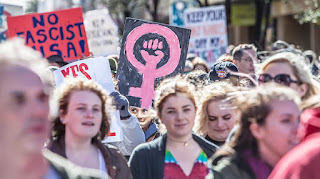 By David Solway: One hears a lot of talk about cancel culture these days, but little discussion of how a cultural movement goes about canceling itself. This is especially the case with feminism. The entire program is ruptured by flagrant violations of common sense and manifold contradictions it cannot resolve. One scarcely knows where to start in disentangling the skein of incongruities, mystifications, fallacies, and inconsistencies which comprise its dogma and determine its destructive course in the public domain.
Many of the movement’s disabling contradictions have been abundantly documented in various books, some of the most decisive including Paul Nathanson and Katherine Young’s misandry volumes Spreading Misandry and Legalizing Misandry; William Collins’ The Empathy Gap; Patricia Pearson’s When She Was Bad; Christina Hoff Sommers’ Who Stole Feminism?; Suzanne Venker and Phyllis Schlafly’s The Flipside of Feminism; Janice Fiamengo’s Sons of Feminism; Bettina Arndt’s #MenToo, Stephen Baskerville’s The New Politics of Sex; Esther Vilar’s The Manipulated Man; and Megan Fox’s Believe Evidence: The Death of Due Process from Salome to #MeToo to mention only a few.

Posted by Angelo Agathangelou at 4:05 am No comments: Links to this post

A Criminal Regime Under investigation 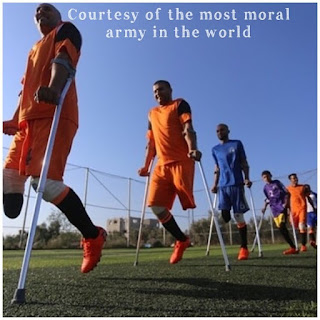 “If you have the law, hammer the law. If you have the facts, hammer the facts. If you have neither the law nor the facts, hammer the table”.
Anonymous legal advice
By ex-Jew Gilad Atzmon: Reports from Israeli press outlets this weekend show that the Jewish State fears the ICC’s (International Criminal Court) decision to move forward with an investigation into whether Israel committed war crimes in the Palestinian territories. Such a probe may expose current and former government officials and military personnel to prosecution on the global stage.
The ICC will investigate Israel’s policy of settling its citizens in the West Bank, its actions during the 2014 war in Gaza, and its response to Palestinian protests on Gaza’s border beginning in March of last year. The ICC will examine indiscriminate shooting by Hamas and other Palestinian groups into Israeli cities as well.