'Maxwell 'The Talmudic Goy Pensions Plunderer' was an Anglo-Jewish multi-millionaire who was working with the Jewish Israeli Mossad.' 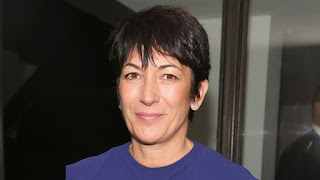 JTA reports: “Ghislaine Maxwell, a British socialite who has been accused of colluding with lover late paedophile offender Jeffrey Epstein, is reportedly hiding out in Israel.”
The story quotes a New York Post article based on information from an unnamed source who told the Post: “She is sometimes in the U.K., but most often in other countries, such as Israel, where her powerful contacts have provided her with safe houses and protection.”
According to the Post source: “Ghislaine is protected. She and Jeffrey were assets of sorts for multiple foreign governments. They would trade information about the powerful people caught in his net — caught at Epstein’s house.”
Reuters recently reported that the FBI is investigating Maxwell, who allegedly recruited under age girls to have sex with Epstein.
It is unknown whether the Israeli government is assisting the US in locating Maxwell. Critics have complained that Israeli law enforcement is frequently lax on those who have committed crimes in other countries. The US gives Israel over $10 million per day.
Maxwell is the the daughter of Robert Maxwell, who we are told died and clearly under mysterious circumstances in 1991. Maxwell 'The Goyim Pensions Plunderer' was an Anglo-Jewish multi-millionaire who was working with the  Jewish Israeli Mossad.
Former CIA officer Philip Giraldi reports: “After his death, he was given a state funeral by Israel in which six serving and former heads of Israeli intelligence listened while Prime Minister Yitzhak Shamir eulogized: “He has done more for Israel than can today be said.”
Giraldi writes that the Epstein case “has all the hallmarks of a major espionage case, possibly tied to Israel….  the whole filming procedure smacks of a sophisticated intelligence service compiling material to blackmail prominent politicians and other public figures.”
Epstein, who had been facing sex trafficking charges for allegedly abusing dozens of girls as young as 14, died in a New York City jail cell in August. While law enforcement officials said it was suicide, a forensic pathologist hired by his family said the autopsy pointed to homicide.
An attorney for one of the young victims says Maxwell “was integral in maintaining the sex trafficking ring,”
“Jeffrey Epstein couldn’t have done what he did for as long as he did it without the services of somebody like Ghislaine Maxwell. She is as culpable, in my judgment, as Jeffrey Epstein himself.”
Victims depict her as dominating, controlling, and abusive.


Posted by Angelo Agathangelou at 5:17 pm