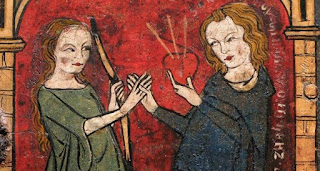 By Peter Wright: Frau Minne (vrowe minne) is the personification of courtly love from German Middle Ages. She is frequently addressed directly in Minnesang poetry, usually by a pining lover who is complaining about his state of suffering, but she also appears in the longer Minnerede poems, and in prose works.
She is often referred to as the “Goddess” of romantic love, which is differentiated strongly from other kinds of love such as Christian agape as embodied in the figure of Jesus. To make the distinction clear, romantic love is understood as passion, whereas Christian and Buddhist love is understood as compassion.
A rare allegorical painting of ca. 1400,  discovered in a guild house in Zurich in 2009 (see below) shows Frau Minne presiding over the suffering of male lovers who are having their hearts torn from their breasts. In this cruel scene Goddess Minne, the mistress of love, sits on a throne consisting of two men. She has just torn out the heart of a man to her left which she holds in her hand, while she is already cutting open the chest of another man to her right to rip his heart out.1 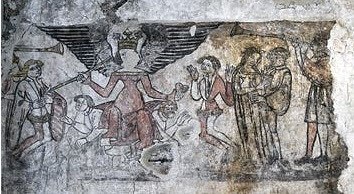 Goddess Minne sits on a throne made of two men, while preceding to rip out the hearts of men in love.
The pathological pain associated with romantic love has been linked to women’s cultivation of superstimuli, i.e., sexually provocative clothing styles, cosmetics, practiced gestures, and the cultivation of titillating and often frustrating behaviors of courtship that resemble sado-masochistic practices. Such passion-inducing love contrasts with other kinds of love as mentioned above, such as friendship love; the basic parental love extended to children; or that of Christianity or Buddhism which focus on human compassion.
As mentioned elsewhere,2 romantic love started as a code of conduct among the aristocratic classes of the middle ages. However, the trend made its way by degrees eventually to the middle classes, and finally to the lower classes – or rather it broke class structure altogether in the sense that all Western peoples became inheritors of the customs of romantic love regardless of their social station. This breaking of class barriers is marvelously rendered in the painting below by Hans Koberstein, who portrays the Goddess leading a helpless throng consisting of royalty and pauper, young and old, who are equally held under her sway.


A 15th century depiction “The Power of Frau Minne” (see picture below) captures the pain and pathology so widely believed to be part of the romantic love experience. The pathology associated with romantic love is so disturbing, in fact, that clinical psychologist Dr. Frank Tallis has written a book detailing the sickness of it based on his extensive clinical experience:


Obsessive thoughts, erratic mood swings, insomnia, loss of appetite, recurrent and persistent images and impulses, superstitious or ritualistic compulsions, delusion, the inability to concentrate—exhibiting just five or six of these symptoms is enough to merit a diagnosis of a major depressive episode. Yet we all subconsciously welcome these symptoms when we allow ourselves to fall in love. In Love Sick, Dr. Frank Tallis, a leading authority on obsessive disorders, considers our experiences and expressions of love, and why the combinations of pleasure and pain, ecstasy and despair, rapture and grief have come to characterize what we mean when we speak of falling in love. Tallis examines why the agony associated with romantic love continues to be such a popular subject for poets, philosophers, songwriters, and scientists, and questions just how healthy our attitudes are and whether there may in fact be more sane, less tortured ways to love. A highly informative exploration of how, throughout time, principally in the West, the symptoms of mental illness have been used to describe the state of being in love, this book offers an eloquent, thought-provoking, and endlessly illuminating look at one of the most important aspects of human behavior.3


References:
[1] Frau Minne hat sich gut gehalten, 2009
[2] Wright, P., The evolution of romantic love via romance writings, (2017)
[3] Love Sick: Love as a Mental Illness, by Frank Tallis – overview on Goodreads
Feature image: Frau Minne (personification of courtly love), painted wood, Southern Germany, 1320-1330 ca. The image depicts the lover presenting Frau Minne with his heart which has been pierced by three arrows. There are two German inscriptions with the image, the first of which translates as “Lady, send me solace, my heart has been wounded,” while the second reads as “Gracious Lady, I have surrendered.”

Posted by Angelo Agathangelou at 5:41 pm