'Mayor Kwon Young-jin made a televised address, urging citizens to wear masks and remain indoors while revealing his concerns that the contagion could rapidly overwhelm the city's health infrastructure. “We are in an unprecedented crisis." ...He ordered the shutdown of all kindergartens and public libraries. Schools in the city considering postponing the beginning of the spring term scheduled for early March. Shopping malls and movie theaters empty and the usually busy city streets were quiet.' 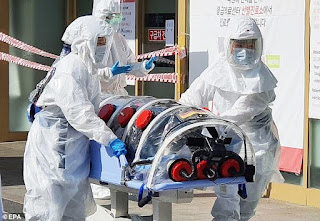 By Tyler Durden: One day after South Korea reported its first coronavirus death and shortly after all of Daegu city's 2.5 million residents were put on lock-down, the number of covid-19 cases in South Korea has exploded, with 52 new cases reported overnight, representing a third of all the nation's cases.
After four largely uneventful weeks in which South Korea had confirmed just 30 cases, the number of cases has soared five fold in just three days, rising from 31 cases on Tuesday  to 156 on Friday (local time), in what appears to be a very aggressive exponential increase. 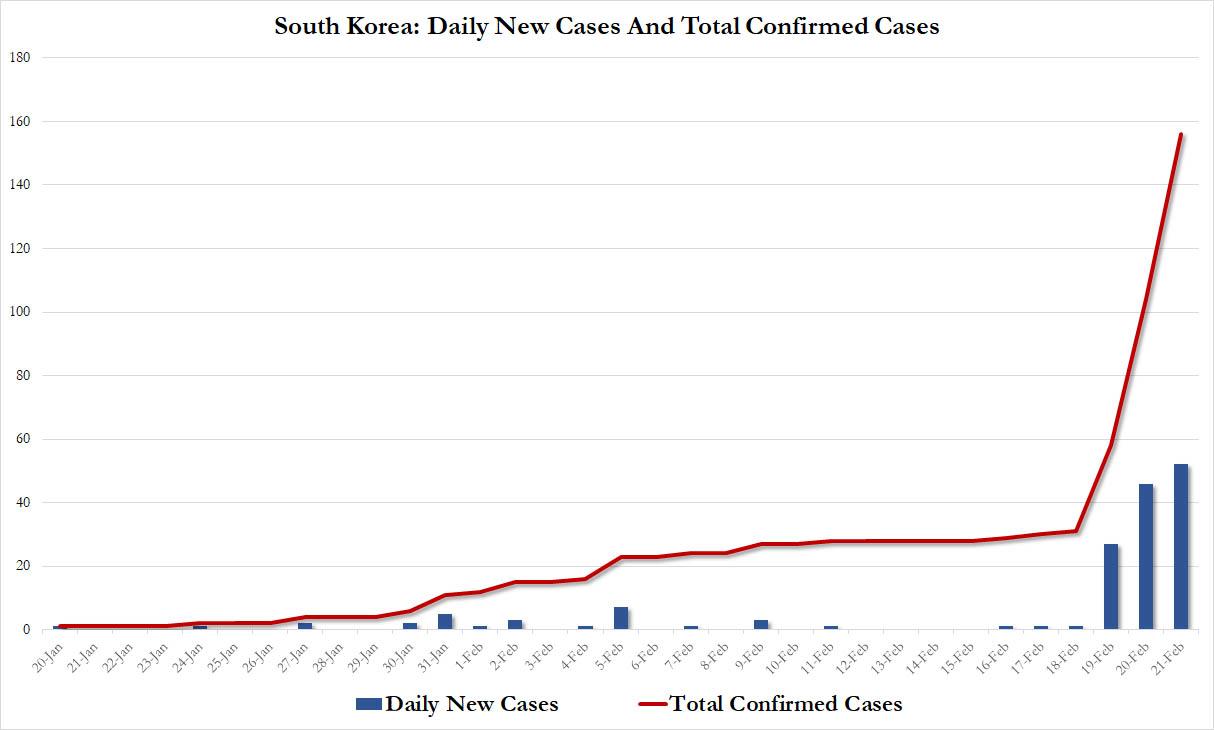 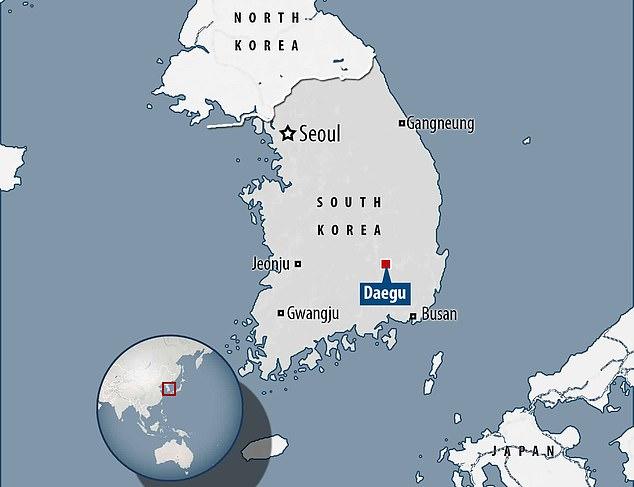 Mayor Kwon Young-jin made a televised address, urging citizens to wear masks and remain indoors while revealing his concerns that the contagion could rapidly overwhelm the city's health infrastructure. “We are in an unprecedented crisis,” the mayor told reporters, unaware that the last thing he can afford to do in times like these is tell the truth.
He ordered the shutdown of all kindergartens and public libraries, according to Yonhap. Schools in the city were considering postponing the beginning of the spring term scheduled for early March. Shopping malls and movie theaters were also empty and the usually busy city streets were quiet. A concert featuring BTS and other K-pop stars that was set for Daegu Stadium on 8 March has been postponed.
The defense ministry banned troops stationed in Daegu from leaving their barracks and receiving guests. The US military imposed similar restrictions on its army base in the city, which houses thousands of troops, family members and civilian employees, curbing travel and closing schools and child care centers.
In what the Korean center for disease control called a “super spreader” event, almost half of the country’s total of 82 infections have been linked to a 61-year-old woman who worships at the Daegu church, which has often accused of being a cult.

She first developed a fever on 10 February but reportedly twice refused to be tested for the coronavirus on the grounds that she had not recently travelled abroad. She attended at least four services before being diagnosed. So far, almost 40 other members of the church have been confirmed as infected.Shincheonji claims that its founder, Lee Man-hee, has donned the mantle of Jesus Christ and will take 144,000 people with him to Heaven, body and soul, on Judgement Day. And if the number of cases continues to grow exponentially, Judgment Day may be in early March.
Daegu’s municipal government said there were 1,001 Shincheonji members in the city, all of whom had been asked to self-quarantine, with 90 of them currently showing symptoms. Those who have symptoms “will be tested as soon as possible”, Kwon Young-jin said, urging stronger action from the government in Seoul and calling the national response “inadequate”.
“We plan to test all believers of that church and have asked them to stay at home isolated from their families.”
The situation was “very grave”, South Korean vice health minister Kim Kang-lip said at a separate briefing.
Shincheonji said on Thursday that it had closed down all its facilities nationwide.
“We are deeply sorry that because of one of our members, who thought of her condition as a cold because she had not travelled abroad, led to many in our church being infected and thereby caused concern to the local community,” it said in a statement.
Separately a man in his 60s from the neighboring Cheongdo county tested positive for the coronavirus after dying Wednesday following symptoms of pneumonia, authorities said. He was among 15 people found to be infected at a hospital.
* * *
Meanwhile, a few hundred kilometers west, China continues to pretend it is successfully containing the virus, although it apparently can't even do that. One week after Beijing reported nearly 15,000 new cases after a change in the definition of "infection", China reverted back to the original definition in hopes of drastically reducing the number of new cases and boosting people's confidence it was successfully containing the pandemic. The result was that the number of new cases on Feb 19 was just 391, one of the lowest since the start of the pandemic, and a far cry from the 15,000 new cases reported a week earlier. Alas, in its ambition to get people back to work, the case number was too low and nobody believed it, resulting in even greater self-quarantining as China's population increasingly believes that Beijing is no longer telling it the truth and is willing to sacrifice the population just so some factories can resume production,
Meanwhile, as China bounces around between one definition and another, in hopes of finding some "just right" middle ground between reporting too many cases and sparking a market crash, or too few cases and leading to social violence as people on the ground certainly know just how bad it truly is, Beijing is now losing all credibility and even China's best friend in the US, Bloomberg, writes that "Hubei Changes Virus Count Method With Data Mistrust Growing." This happened after on Thursday China reported that it had just 349 additional confirmed cases, compared with almost 1,700 additional cases from the day before; the number then doubled to 889 on Friday as China appears to have given up on any pretense at reporting data objectively.
The outcome appears to be a recreating of the famous surgery scene from Spice Like Us, where China comes up with some made up number, gauges the market's and media's reaction, and then China offers a totally opposite number on the next day as it scramble to give everyone what they want while creating the fiction that it is in control.
The irony, of course, is that the more China manipulates the data, the less anyone will believe a positive outcome for the epidemic and will instead claim that this is just the result of Chinese propaganda: "It points to a rather concerning confusion over how best to officially report the number of cases, leading to a loss of confidence in the true numbers,” said Jeffrey Halley, a Singapore-based senior market analyst with Oanda Asia Pacific Pte. "That could mean that internationally, the rest of the world keeps China in lockdown for longer, which will not be good for the ‘V-shaped recovery’ projections."
As reported previously, the latest changes cast doubt over whether the drop in new cases - a positive sign that the epidemic is coming under control at the epicenter - is actually happening. In recent days, China’s leaders have scrambled to project optimism over the outbreak, which has shut down large parts of its economy and plunged industries from retail to aviation into crisis. Companies and factories across China are now being urged to re-start economic activity, while Chinese premier Li Keqiang said on Monday that the outbreak is on "a positive trend."

What Li meant is that Beijing is willing to sacrifice healthy citizens by commingling them with potentially infected ones, if it means that China's GDP, already set for a record plunge, can be pushed up just a bit. Of course, none of this is lost on the people, and in a country where the biggest morbid fear is one where the middle class rises up and overthrows the communist parasites in charge, there is a distinct possibility that by telegraphing to the people just how worthless their lives are to Beijing, the instead of delivering a "positive trend" for the outbreak, China's ruthless rulers may soon be on the receiving end of what happens when 1.4 billion Chinese grab the pitchforks and go after those who are willing to risk their lives if only it means that the "quota met" bonus payment for 2020 is made.
Source

Posted by Angelo Agathangelou at 6:24 am