The War Pigs Are Finally Revealing Themselves - And This Is Just The Beginning...

'For the past three years Trump has made announcements of an imminent pull back of troops in the Middle East, including the recent claim that troops would be leaving Syria. All of the announcements were followed by an INCREASE in US troop presence in the region. ...They need us to participate. Don't participate, and refuse to support new banker wars.
Don't be a War Pig.' 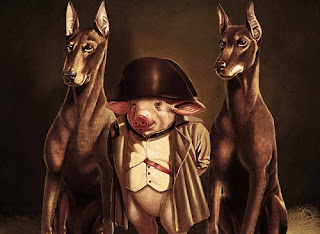 Authored by Brandon Smith: In 2016 during the election campaign of Donald Trump one of the primary factors of his popularity among conservatives was that he was one of the first candidates since Ron Paul to argue for bringing US troops home and ending American involvement in the various elitist fabricated wars in the Middle East. From Iraq, to Afghanistan, to Syria and Yemen and beyond, the Neo-Cons and Neo-Libs at the behest of their globalist masters had been waging war oversees unabated for over 15 years.

Max and Stacy look at the irony of US veterans of the Vietnam War retiring to Vietnam, where they can afford a better standard of living, including healthcare. They also discuss the ‘three truths’ that the Democrats need to accept about 2016 in order to win in 2020.

“I'd Like To See Them Call Me": How Trump Used An Encrypted Swiss Fax Machine To Defuse His Iran Crisis

"We don’t communicate with the Iranians that much, but when we do the Swiss have played a critical role to convey messages and avoid miscalculation." 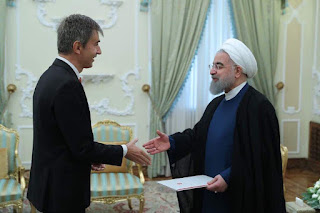 By Tyler Durden: Even as Trump was rage-tweeting on Jan 4, two days after the killing of Iran's top military leader Qassem Soleimani, that he would hit 52 targets including Iranian heritage sites [Just like Jewish Israel regime funded ISIS] for potential retaliation if America suffered losses following an Iranian attack, warning that "those targets, and Iran itself, WILL BE HIT VERY FAST AND VERY HARD", the US president was busy, secretly using an encrypted back-channel to bring the world back from the brink of war.
As the WSJ reports, just hours after the U.S. strike which killed Iranian Maj. Gen. Qassem Soleimani, the Trump administration sent an urgent back channel message to Tehran: "Don’t escalate." The encrypted fax message was sent via the Swiss Embassy in Iran, one of the few means of direct, confidential communication between the two sides, U.S. officials told the WSJ.

Read more »
Posted by Angelo Agathangelou at 1:59 pm No comments: Links to this post

Join Bettina's campaign to ensure universities comply with the recent Queensland Supreme Court judgement saying it's illegal for them to adjudicate sexual assault.
Posted by Angelo Agathangelou at 9:36 am No comments: Links to this post

"Will YOU blame Iran when they retaliate?"
Caleb Maupin.
Posted by Angelo Agathangelou at 6:34 am No comments: Links to this post

Computing Forever
Posted by Angelo Agathangelou at 3:19 am No comments: Links to this post

Because We Said So! Tale Of The Fempire's New Clothes

HoneyBadgerRadio: Discussing the made-up language of feminism, and how it’s used to obscure the baseless nature of most of the claims the movement makes... if, that is, you are up for the "emotional labour."
Posted by Angelo Agathangelou at 12:14 am No comments: Links to this post